Stryper: The hard rock band face the criticisms of dumping their Christian beliefs

Doug Van Pelt interviewed Robert Sweet of STRYPER to talk about the controversial change of direction. 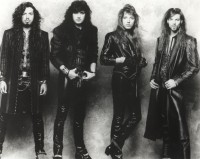 Well have you been having fun with the press lately?

"We've been having a good time. We were just gone for two weeks on a promotional tour. So far everyone we've run into has really been cool. We've had a lot of time to spend with them and explain things; but a couple of months previous, the press had fun with us...you know, in not too good a way."

Yeah, I know how that can be.

"That happens, though. If someone doesn't like you, they've got the final power to make you look bad when they write something up."

Yeah, people have personal vendettas that they use their pens with.

"Yeah, that's not too nice either."

Well, I just wanted you to know that I love you according to 1 Corinthians 13, which mentions not holding an accusation against you and believing the best in you. For the record: I believe that you are a Christian and a child of God; and, until you tell me otherwise, I will continue to believe that.

"Thank you. You know what, that's something that a Christian would say. That's really cool. It seems like so many Christian people we've been running into lately have nothing to say like that at all. They have nothing good to say - it's all bad...and half those people five years ago - it was all bad too. But, that's really cool man. I really appreciate you saying that. I love you too."

Well, why don't you give a brief explanation of the direction change, and go over the look, the lyrics, and the sound.

"Sure. First of all, something that we've been really getting kind of upset over is this whole 'direction change' thing is being blown out of proportion so much. It started last year. Things got to the point where it was so bad that no one was even listening to the music anymore. I don't think people were even being reached for Christ anymore. Whenever Stryper would do an interview or whenever we did something on radio or TV, it would be, 'Here's the religious band,' or 'Here's the heavy metal Gospel band,' or whatever, and we were freaking out. This isn't what Stryper is. "Stryper is a rock'n'roll band, and we try to do whatever we can to make Christ seem like He's something everyone should have - especially those people who listen to rock music. Well, it was getting all turned around, so when we got back from the 'In God We Trust' tour, we went, 'Okay, wait a minute: We've got to do something about this, because all there's left to do is go out next year and see the same thing happen all over again; hear the same old questions - which have nothing to do with Christ, only to do with issues...hearing the same old stupid arguments and condemnation'. That's not really going anywhere. That's not why we did this with the band.

"People are now screaming, 'Big change!', you know, 'Don't buy Stryper's new album. They totally flipped to the other side.' I've always told everybody, 'Hey, what about every single that Stryper has ever had out?' It's never mentioned the word 'God' or 'Christ' in it...ever. So, I think people are getting a little too excited. What we decided to do was to get the attention of the people that we've always tried to get the attention of: the normal rock 'n' roll fan that listens to Guns 'n' Roses, Motley Crue, or Whitesnake.

"We'd been looked at as 'those choir boy's' or this kind of 'joke band' for such a long time, we felt we had to do a few things to grab people's attention. One of them was to do a real hard record. We had a great producer on our last record, but he was a Pop producer. The record had some heavy songs on it, and I feel it was a good album, but it was a little Pop.

"This time it was, 'No go! We get a rock'n'roll producer, or that's it.' So, we ended up with Tom Werman. We went in and said, 'We're gonna have fun with this album. It's not going to be over-done or over-produced. We're going to write lyrics to songs that have a moral meaning to them.' Nothing on the record is bad. They all have a moral statement to it.

"We're going to grab people's attention again, but not by denying Christ; not by walking away from Christ. No one's ever heard us say this - and they never will - 'We're not Christians anymore,' or 'Hey, we've dropped the whole thing. We don't believe in Christ.' It wasn't that thing at all. It was just to write songs where people couldn't point a finger at us and go, 'See, we told you it's the same old thing all over.' That's what radio was doing to Stryper.

I feel that your album name sends a mixed message and although you want people to see you a certian way, trying to prove a certain point may not be the best way to go about it. GD evil could be interpreted two ways, the way you intended it where you are saying God condemns evil, but it could also be looked at as blaming God for evil even though it is not God causing evil but sin that it causing evil. In my opinion I don't think its the best way to get your point across. I know you are christians and that you have always been controversial but maybe you should think about this a bit more.