Having followed SUPERHERO from their earliest days as an obscure independent, Mike Rimmer now quizzes the band who continue to make strides in the mainstream.

Can you remember when there was a lot of talk about the record label that Delirious? were setting up and which British band they would sign up? Who would be the first? At the time, just about every independent UK rock band I talked to claimed that they were going to be the ones! I would inwardly smile. I only suspected that it would be Superhero when Delirious? casually asked me what I thought of them backstage at a gig.

And now a couple of years later this powerhouse of a Glasgow band have had their hard work and dues paying rewarded with a handsome record contract and all their worries are over. If only! The reality is that the band are slogging their way round the country opening up for Delirious? on the January tour in sub-zero temperatures and wonderful British weather. But at least this time they are allowed to plug their instruments into amplifiers and turn the volume to 11 whereas the minuscule size of a certain stage in a club in Camden meant that before Christmas the crammed audience only saw an acoustic set. Superhero are still in the business of introducing themselves to audiences like any support act but for how long? Judging by the album, not long!

The band have plugged away over the past five years releasing the occasional independent project and building up a reputation on the mainstream club scene in Scotland. Ironically in chatting to them, there's only one Scottish voice and that's guitarist and main songwriter Pete Morrison, the rest of the band are as English as English but shhh..don't tell anyone north of the border!

So what are the guys trying to do with their music? Are they another Christian band hiding their faith and going undercover into the mainstream? Singer Tim Cheshire responds, "The thing about Furious? Records is that they're not just trying to put out another band that's going to sell some records to the Christian community here and in the States. They just want to think out of the box a little bit. The vision for Superhero was never just to play music for Christians, not that there's anything wrong with that at all. We know that a lot of our supporters are Christians, young people that go to churches and we want them to get into the band and like it. That's happening and that's great but we also want to create some music that can speak to people outside of the Church. So Superhero is really for unchurched people and we want to do something that means something to them."

The band are determined to make music that intrigues listeners but isn't there the possibility of compromising the message along the way? Tim again responds, "Well of course that can happen but it's really about the heart of the band. The heart of the band is to communicate about God and if you package something to make it more likely that a non-Christian will listen to it, then there's nothing wrong with that. One of the things that we want to do is to get a Superhero record into every household in the country because there'll be a lot of places where they don't have a Bible in the house and there might not be any sense of spirituality in that house, but they might just buy a Superhero record because it got to number six in the charts or whatever. I believe strongly that if a song is written with a purpose to challenge people and God is in it, the Holy Spirit is in that song definitely. There's no reason why God can't use that song when it's playing. You don't need to be in the room speaking to a person. They may not fall down on their knees in the living room right there and then and repent.maybe they will? But it might just open up their eyes to the possibility of there being something out there. It might just point them in a different direction to the way that they're going." 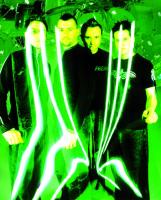 When it comes to Christian rock albums recorded in the UK, the sonic beauty, pure energy and whistles and bells of their selftitled release drench the songs with ear catching sounds. If anything was going to grab the attention of the casual unchurched music fan, this is it. The band caught the attention of record producer Alan Branch who fell in love with their music. Amongst Branch's previous clients are Bjork, Sinead O'Connor, Blur, Nine Inch Nails and Primal Scream. Quite an eclectic mix. Bassist Gordon Blackler explains, "He really only gets involved with projects that he believes in and people that he can believe in. He's been working in this industry for 20 years and he's met the whole range of people. He's got to the point where he doesn't need to take every job he gets, which is a nice position for him. It's good for us because I know that he's more than just a producer." Drummer Rick Kennedy chips in, "We really hit it off in the studio, we just really got on well with him which is just as well because you're literally working with someone 15 hours a day for three weeks. You have to get on!"

Mind, not everyone in the band had an easy ride in the studio. Guitarist Pete Morrison lets out an honest sigh at the memory, "Awhh it was a nightmare!" he shares. "It was a total nightmare for me! I think out of everybody, I found it tough with the guitar because I'm not the most amazingly, technically gifted guitarist in the world and so I had quite a bit of pressure from him, but in the end that was good because it just showed me that he's not settling for second best. One thing Alan Branch was into was experimentation. If I had some weird idea which might not work, he was well up for just sticking me in there and just trying something."

The band have worked hard in the UK and Europe to get their music out to an audience and like many bands have had fun experiencing different cultures. In parts of Germany and Scandinavia, their uncompromising rock has been well received. Amidst all the fun of describing the horrors of playing live with borrowed equipment, the band go into a lengthy discussion of what they describe as "lumpy milk". It seems our European brethren aren't as precise in the pasteurisation process as we Brits. Gordon is the band expert, "It looks like sour milk but it's essentially like a cross between plain yoghurt and milk, so it's actually very nice!" Hmmm. I am not convinced but the band persevere, "We used to make it in Poland. We just used to buy a litre of milk, put it in a Tupperware container and shove it on the radiator of the house until it got a big skin on it and then you could stir it and make yoghurt." I am left wondering how the band got back to Glasgow with the contents of their stomachs intact. Just as I am wondering about this, Gordon, who lived in Poland for four years, drops the mindblowing fact that people in Poland don't have turkey for Christmas lunch, instead they prefer a fishier alternative - carp! Tim is indignant, "It's just wrong! No, give me turkey and normal milk any day!" Personally I'm with Tim on this one!

At a time when it seems like more and more Christians are making it into the charts, might this be exactly the right moment for Superhero to enjoy success? Tim responds, "Success is only meaningful and useful if you use it for something. It's easy to say this when you haven't attained the full dream yet. But we want to be able to say to the local youth worker who's trying to do something with the kids where he lives, on a real tight budget that we'll still go and do that gig for that guy. He booked us two years ago when no-one had heard of Superhero and we were of limited use to him. We did a great show and the kids that came enjoyed it, it was a good event but we didn't help that much in attracting the kind of people he wanted at that event. If we do attain some level of success, which we are going to do and are now doing, then we will be much more useful to him because kids will want to come and see the band and when we play in their area, we're playing at the local youth church or whatever it is, if they want to come and see the band, they're going to have to come to his event. We'll be quite happy to fit in with whatever it is he's doing on that night. So if in two year's time we're not doing that Mike, then you can pull us up on it."

Don't worry Tim, I will! "But that's really the heart of this band if that makes sense. It's not success for success' sake, we want to use it, exploit the success. The music industry exploits people in this country, no doubt about it and it exploits young people in this country and feeds them with really bland, unchallenging pop music which doesn't make them think or challenge them in any way and takes their money for the record. We maybe just want to turn the tables a little bit and we want to exploit that system to get across our message." The band remain totally committed to local church and are based in Glasgow's Destiny Church. Tim shares, "We are totally, 100 per cent involved in the church. We're as involved in the local church as we can be and are behind what our local church is doing. We're not alienating ourselves from the church, we want to be a useful tool for the church, it's just that we're not a soundtrack for the Church. That's not Superhero. We're making music for the world and our aim is to channel people towards the Church, which is where it's at, which is where they can find God."

For more on Superhero visit the Superhero artist profile