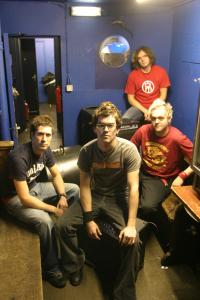 When some recording studios refurbish they are talking about a new carpet and a lick of paint. ICC Studios here at the seaside town of Eastbourne haven't gone down that route though. Their new recording desk, a SSL AWS900, is truly a state of the art wonder, comparable with anything available anywhere in Britain. As producer Trevor Michael shows me its astonishing facilities by playing me some of the unfinished tracks on Supervision's new 'Day Of Small Beginnings' album it's clear to me that the Liverpool-based rock band have made giant strides since I saw them win the Ultimate Showcase in 2004.

Trevor plays me a track as the band members sit around the control room trying to conceal the huge grins creeping across their faces. "White Of Your Eyes" with its ribcage-crunching drums and searing guitar work manages to be both explosive and haunting. "This is track needing the least amount of work," says Trevor nonchalantly. Soon the band are hard at work again. Trevor suggests close mic-ing on "Sound Of Your Voice". Later, as "All You Say", a full tilt rocker with almost punk energy, blasts from the speakers, Ian Finch, known to everyone as Finchley, explains how the songwriting process for the band often works. "I begin working on the songs, say the verse, and then Mark (Doohan, the band's lead singer and guitarist) is good with choruses. But then many of the songs are held together by the bassline that James (Harding) writes."

More tracks are played me. Throughout James 'Burchy' Burch's drums sound sensational as they explode from the monitors. Burchy himself is looking a little lagged. Not surprising, since they were up recording until 2.30 this morning! Having caught every thud of the kick and splash of the cymbal, Trevor Michael is now running a drum track through a fiendishly clever device on the desk known as the Beat Detector which identifies the slightest slip of tempo and locks it back into place.

The band's 'Day Of Small Beginnings' album is clearly going to be one of the finest rock albums yet from Britain's burgeoning grassroots Christian rock scene. Having been asked by numerous journalists to describe their sound, we all throw in our sixpeneth worth in an effort to codify the band's sound. "Skate surf rockers with a progressive direction and a message that can change the universe" seems to do the job. I ask Finchley what he considers his favourite song on the project. He replies, "'Choke' is quite a personal song to me - it's about living out God's calling on your life and those moments when you know God's telling you to do something but you're scared as you're right out on the edge. The song makes a lot of metaphorical references to my favourite activity - surfing, which is cool. In addition it's probably our most ambitious arrangement yet - it has up to five layers of guitar in places along with piano in the outro."

Another powerful song on the album is "Scream". Finchley describes it, "The song is basically a rant at us Christians to give ourselves a shake, confront our issue and start living the life. I love the simplicity of the song as well - absolutely rocks." 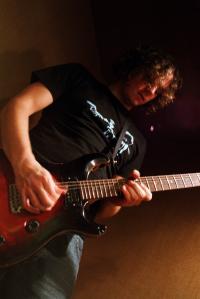 Recording the album was not without incident. Finchley recalls, "While recording the guitar part in the middle of 'Breathe You In' a plant box landed on Trev's car screen window and smashed it about 10 minutes after the Bear (bass player James Harding) had reparked it there! All the alarms went off in the studio as well and it all got a bit chaotic. It seemed that a sudden storm had started and stopped in the space of me recording my solo. Thus it was pronounced that my guitar playing had special powers to control the elements and I got called the 'captain vibrato' for the rest of the day."

Maybe the thousands of rock buffs who investigate the 'Day Of Small Beginnings' album will need to ensure there are no plant pots or ornaments anywhere near their stereos when they play the album. For this is a project that demands full volume.

Hello Trevor,
keep up the good work l am proud of you.
clifford