They sold a thousand CDs at Spring Harvest. Their debut album has been called "a perfect pop confection." Yet TBC are full-on evangelists. Tony Cummings spoke to the Manchester foursome. 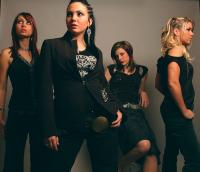 Although young teenagers still make up the largest section of pop music's audience, observers of the scene are now identifying that the audience for the Will Young/Rachel Stevens end of music is broadening and that this phenomenon is due to the saturation exposure pop receives on Saturday morning kids' TV. Where once young children's tastes didn't go much beyond Bob The Builder, today avid fans of the latest pop sensation are as likely to be aged five as 15. Not only that, but their mums have become pop fans too, accompanying their kiddywinkers to the concerts and buying the CDs. This widening of the pop music audience is vividly demonstrated in Christian ministry by Manchester's tbc. Said the group's Shell Perris, "It's amazing to see the variety of age groups at one of our concerts. We're seeing five year olds, their mums and even their grandmothers at our gigs. It's great to see the different generations getting into our music, particularly as through that they're picking up a whole heap of spiritual truth about Jesus and the difference he makes in our lives."

The proof of tbc's wide appeal was shown recently at Britain's annual Spring Harvest teach in/celebration. With their self-titled debut album released in time for the event the group sold a stunning 1,000 copies at Spring Harvest 2005. Shell is more excited about what God was doing at the event than gloating over units shifted. "We went to Spring Harvest expecting to see God do some awesome things and that's exactly what happened. During Spring Harvest, we knew that a lot of people were buying our album but it was a very nice surprise to get back to Manchester and find out that we had sold so many. God is amazing isn't he? For weeks two and three of Spring Harvest, we were working alongside some quality people in the eight-11's venue at Skegness. We had a fantastic time! It was extremely hard work but again, we witnessed first hand God going beyond our expectations! During both weeks approximately 400 - 500 eight-11 year old kids gave their lives to God for the first time! I get so excited every time I think about it! I totally believe that God is doing something in that age group of young people that is going to change our nation! Come on! That's we want to see!"

Greater Manchester has long been the key area in Britain for radical schools ministry. The creative template of music groups going into a school for a week taking RE lessons and assemblies and then, on a Friday or Saturday, putting on a full scale evangelistic concert has in the past brought forth a huge harvest of souls for the pioneering The Tribe (previously known as The World Wide Message Tribe). Now tbc are building on the proud and productive traditions of Manchester schools evangelism. The group consist of 20 year old Shell Perris from Warrington near Manchester, 21 year old Laura Moseley from Dartford, Kent, 20 year old Liz Roberts from Swansea, South Wales and 20 year old Natalie Trueman from Horsham, West Sussex. The 'tbc' album, with exemplary production from songwriters Zarc Porter and Mark Pennells, is unquestionably one of the finest collections of Christian pop released in recent years.

The album is an eclectic mix of sounds, from the chunky guitar rock opener of "Do You Know What It's Like" to the dance funk of "If This Don't Make You Jump" to the retro disco sounds of "When I Get To Heaven" and the pretty piano-led ballad "Loved", it is the latter which is Shell's favourite. "It's a powerful lyric from Mark which expresses everyone's need to be loved and how God loves you, no matter what. When we sang it recently everyone was crying. It really seemed to strike a note with people." 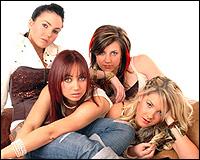 Prior to the release of 'tbc' a single, "Mind Your Head", created considerable interest for the group. Shell explained the group's early history. "Tbc was first launched at Spring Harvest 2004. However, there have been different line ups since then. We now have an amazing (and settled) line up and we have been together since the beginning of this year."

The pioneering organisation behind tbc is the Innervation Trust. Set up by Porter and Pennells, Innervation has zealously sought to communicate the Gospel to today's youth. The group responsible for communicating Innervation's vision across the UK (and recently overseas as well) has been rock rap revisionists thebandwithnoname. With that group very much the public face of Innervation, various music initiatives, each based in a particular city and each known as The Collective, have conducted schools evangelism. It has been this system which birthed tbc. Explained Shell, "Before we were in tbc, we were all in one of the Innervation schools bands. Liz and Laura were in the one in East Anglia and Natalie and myself were in the one in Merseyside, so we're used to being in school. All of us absolutely love it! It's not scary any more but it can be quite tiring. Seeing the young people giving their lives to God makes it all worth while."

One thing that cannot be emphasised enough is that tbc's primary passion, even more than making quality pop music, is to reach the lost with the message of the Gospel. This is summed up in a story Shell recounts of an encounter she had during a schools mission. "During my time in Liverpool there was a particular school that we visited and we met a student there that was trying to commit suicide because she hated her life so much. God enabled me to be in the right place at the right time and I caught her trying to overdose. We were able to talk to her and tell her that God loved her more than she could possibly imagine. At the end of our week in school, she gave her life to God!! That just goes to show that God is using both the school's band and the touring bands to show young people all over the country that he is real and that he loves them more than anything!"

My daughter is a wonderful young lady with special needs. When TBC 's CD was released in 2005, my daughter and I wanted to buy it because it is high quality pop music with good lyrics. So far we have not been able to find it and she ' d still would love to have it. Is there any way you can sell me a copy, please? She is recovering now from a rough year and this album would mean a great deal to her ( she saw tbc dancing on TV "if this don't make..." and danced)

saw the new-line up. They are fantastic and sing really well. Can't wait for the new album! Keep up the good work girls

Can we have some new info re 'tbc' please as they've had a new line-up since the beginning of this year, and I know that yu interviewed them after their brilliant appearance at ' Passion '.

i saw the new tbc lineup yesterday in near preston, they were awesome! the best singers and dancers ive ever seen. natalie is well fit! but i found out she's married (gutted!). cant wait to see them again some other time!
FB

i have one of tbc cds and it is great !!!!!!! tbc is my
favourit band in the world . Its also good that you're a christain band .

i agree! They're totally awesome! i have one of ther cd's and it totally rocks this world!

For more on TBC visit the TBC artist profile