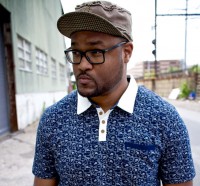 A rapper who's established himself on the increasingly crowded Christian hip-hop scene is Ohio-born Taelor Gray. His Cross Rhythms radio hits like "Gorgeous" and "Famous" show that Taelor is adept at creative, clever and thought-provoking flows, while his latest single "All Minds Clear", a collaboration with Jonathan Baher, shows he's lost none of his verbal dexterity.

Taelor was born in June 1984 in Columbus, Ohio. He was raised in the Pentecostal Church and, with his brother Christon Gray and friend James Hazley, formed a gospel rap group, The Elevationists. Taelor told the Hallels website about how he stumbled into hip-hop. He explained, "Well, it started with an old song by the Winans, 'It's Time', that had a rap part on it. My brother and I used to sing in the children's choir, and the director used to choose three kids to rap that part when we sang the song at church. I wanted so bad to be one of the kids who did the rap part, but I never got chosen. Ever since then I became obsessed with rap music, and got into hip-hop more in junior high school. As I was getting more into it, my parents found out I was listening to mainstream rap on the radio. . .which was a no-no in our strict, Christian household. My dad took me and my brother to a local Christian bookstore to find something they would allow us to listen to comparable to the secular stuff. We decided on Ambassador's 'Christology In Laymen's Terms' and loved it. Shortly afterward, a friend of ours introduced us to LPG's '360' album and from then on we were sold on believers who could rap."

The Elevationists began to gig around Ohio and, in 2011, released the album 'Cold' followed by a single "Mermaid Flow" (2012) and another single "Heartbeat Jones" (2014). When The Elevationists broke up, both Taelor and Christon forged solo careers. Taelor's first solo album, 'The Mocker And The Monarch', followed in 2015. Taelor told Hallels, "The title sprung out of the notion that we are all trying to find ourselves in the image we see in the mirror. One image is an imitation we shape out of our own idealism without regard to what is true. The other image reveals that the mirror actually shows us who we are, and we are continuously shaped by this discovery. The inspiration comes from James 1:23-25."

The album 'The Straw Man' followed and, in 2017, he released two albums, 'Jacob & Judas' and 'In The Way Of Me'. By this time, Taelor had become the pastor at Linden Life Fellowship in Columbus, Ohio, but still found time to pour out his thoughts on his most personal album, 'The Love Don't Last Long'. Featuring a welter of guests, including Eshon Burgundy and Angie Rose, several of the tracks were produced by his brother Christon. 'The Love Don't Last Long' was reviewed on the hiphopdx website, who wrote, "Probably the most potent thread within 'The Love Don't Last Long''s fabric is Gray's black activist streak. On 'Atlanta', he expresses a very personal anecdote about his young children: 'I be singing songs to my little baby girl 'bout her brown skin tone, make her feel at home/I can see the difference in how they treating my light-skinned son/We gon give her brown skin love'. The same song contains the lines 'I am not a feminist/I believe equality look beautiful in Genesis/Homies facing censorship, y'all been acting sensitive'."

Talking to the Hallels website, the rapper was asked how he would describe his music. "I'd call it conversational rhythm and poetry. I grew up listening to a lot of gospel and soul music, so my approach to creating has always been a bent toward wanting to feel something in a song. It's also pretty cerebral at times - I'm a thinker so I try to write to make people think."