One of the deftest, most intelligent, full on rock albums of the last year has been 'Empty', the debut release by TAIT. Tony Cummings met the band. 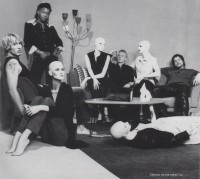 I sit in the echoing concrete dressing room of an edifice in Zwolle, Germany, usually used as an ice rink but on this cold winter Saturday transformed into the venue for the Winter Wonder Rock Festival. Sitting with me are Tait, who in a couple of hours are to play a storming set to the 3,000 Dutch Christian rock devotees. Not surprisingly, the song which gets the biggest reaction of the night is a torridly tight version of "Jesus Freak". For Tait - Michael Tait (vocals), Pete Stewart (guitar) and Lonnie and Chad Chapin (bass and drums) - are still in their formative stage where fans wait to see whether dc Talk will continue to be the main platform for the achingly expressive vocals of Michael Tait. The release of Tait's 'Empty' album has surprised many critics. For one thing, it's a full on rock record with no hint of the R&B and hip hop influences which have underpinned much of dc Talk's work. "You know it's amazing how stereotyped the thinking of people in the music scene still is," says Michael slowly. "Because I'm black there's an inbuilt expectation that I'll be recording R&B music."

Then there is the nature of the 'Empty' project. For clearly the album isn't a project neatly tailored for the requirements of US Christian radio full of obvious hooks and rally-the-troupes evangelical sloganeering. Comments Michael, "The toughest thing when putting the record together, kinda overseeing it if you will, was that I didn't want to make a record that would please the masses, so to speak. People were like, 'Are you going to make a Christian record or a secular record?' I said, 'I'm just going to make a record. I want to talk about issues that affect me. I don't live on Mars, so if it affects me, it affects my brother and my sister. This is the deepest I've thought about it, but every song that came across my plate I would look at and think, where can this go? How can this touch people? I wasn't looking for a Jesus lyric necessarily, let's get excited because we're all Christians, let's jump up and down. But I was thinking, how can it help the inner man? U2, probably one of my favourite bands ever, their songs are so spiritual even on their newest record. It's probably the most spiritual record -it hits me more than most Christian records. If people are offended by that then I'm sorry - just get over it because that's a fact. I don't believe Tait are in the habit of mentioning the word of Jesus in a song. I think there's power in the name of Jesus and there's strength also. But at the same time, everything is spiritual. So I'm talking about the words in loss For Words', the words I wish I had said but didn't, that's spiritual to me. I'm talking about encouraging my brother and sister in a song like 'All You Got' -that's spiritual."

There's a profound lyrical reality in the songs on 'Empty'. Michael continues, "All four of us are preachers' kids first of all and I learned it from my alma mater, I learned it from dc Talk, to write about the issues. The reason the song Talk About Jesus' is on our record is because a lot of people can't relate to this Jesus we talk about. So if a person's hurting or is not a believer or what you want to call a Christian and we're singing all these, what I like to call 'yeah Jesus songs', and I say that very respectfully, they can't always relate to that because they're going through different issues. Sometimes we as Christians will get up in church and put on a different face. We're shaking the pastor's hand or seeing a brother or sister on the street or in the supermarket, it's that reality. Yet the greater reality is that we have a hurting world -Christians are like people who are screwed up, in desperate need of attention from the Almighty. That's not to say that our record needs to be always down, to give in to the depression of our age. But at least let's tackle it, come up with solutions, antidotes. Don't just act like pain doesn't exist - it's just all great and fine with me and God's on the throne!"

I ask Lonnie Chapin, whose previous band experience included a spell with Christian rock pioneers Petra, what it was like living in Nashville. "It's a very jaded city if you want me to be totally honest with you, because it's so over-churched. About every other block you'll find a church from some denomination or from somebody who took something from the Bible and decided to make a denomination out of it. That part of Nashville I can't stand. In Heaven there's not going to be denominations, put it that way. In Heaven there are not going to be church buildings. So when you put everybody into this little steeple thing, a building with four walls and a steeple, I think we have a different mindset of who God is once we get in there. When we step out it's something totally different. It's like they think of God as one thing and when they walk into the church it's something totally different. I wish we'd all say, 'Hey, you know what? We have a loving God who died for us, who wants the best for his children. Let's go and impact our community and impact our world. Forget about all this nonsense and hoopla that we have to throw around with it. Let's just be followers of Christ, just like his disciples were.'"

Such heartening passion for the Kingdom of God permeates everything that Tait believe and sing about. What gives them a crowd eager to listen is the cutting edge keenness of their rock music. And what brings the rock'n'roll bite to Tait is the searing guitar of Pete Stewart. It was Pete's old band, the grunge-orientated Grammatrain that brought Pete and Michael together. "Michael was actually going to co-produce the next Grammatrain, record with us and that was right as the band was kinda disintegrating so that didn't happen," explains Pete. "Forefront asked me if I wanted to do a solo record which was a strange concept for me, it still is to this day to tell you the truth. A solo record always feels weird to me. So I knew I had to do it with somebody and I thought it made more sense to do a solo record with Michael even than the Grammatrain record. I needed someone to collaborate with and we clicked so well."

It was around this time that the idea of Tait was first muted. Remembers Pete, "I remember Michael saying, and these are his exact words, 'I'm going to do a band some day and if you ever want to be in it I'll fire whoever I have to get you in the band.'"

Everybody explodes with laughter at this reminiscence. I ask Michael whether he had a particular sound in mind when work on 'Empty' began. "I heard electric guitars and drums in my head and I thought the groove was going to come from the drums and the bass and that's exactly what I got on the Tait record. I'd like to think that we all had a part in the sound - I know more directly obviously Pete and I producing -we kinda came up with the sound while we were doing the record because it was an experience where the songs were being written and some of them were done but we were still trying to figure out what's the sound going to be like. We were looking for our own sound and that is what, I believe, we got."