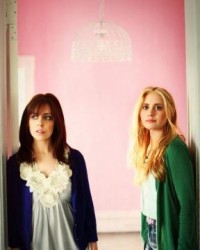 One of the surprise Cross Rhythms Radio turntable hits of 2009 was the hugely infectious "Swing Song" by Tal & Acacia. This sister duo from Portland, Maine, deftly nailed youth culture's obsession with self in this deliciously quirky pop song ("When so young you think only about the next thing to come/All of the time, all of the time I had/All of the times and fads/Empty visions"). Tal and Acacia Wulfing first began songwriting as teenagers, while the family spent an insightful year in Volgograd, Russia volunteering with the Salvation Army social services. After returning from Russia, the sisters developed a stronger sense of the world during their college years in opposite regions of North America.

While the family were in Russia Tal (short for Talitha) learned the guitar. Explained Acacia, "Tal wrote her first 10 songs and singing wasn't anything we really wanted to do. When we came back to the States God just opened the door for someone to pay for us to make a CD. I was just going along like, 'Oh a teen, blah blah, yeah sure,' but little did we know God was building the foundation. It's been God specific directions each time, but it's been quite a ride."

The name the sisters used for the recording debut was Kumi but the duo, aged 16 and 14, were hardly hitting musical heights. Admitted Acacia, "We sounded like a bad version of Hanson. . . or a bit like the Chipmunks."

Tal & Acacia's parents were very involved in ministry. Said Acacia, "It was always just a part of home, we've had men's groups in the basement, and then foster kids, and then our parents started an inner city school. They've always been obedient and open to 'Hey people are in need and let's do something' so we've had amazing examples in our lives, and if we could ever be near them, we'd be victorious, they're phenomenal. Our parents have been our rocks for sure."

Having relocated to Nashville in 2006 Kumi recorded a self-titled album. It received one or two enthusiastic reviews, one reviewer proclaiming that "they have crafted 10 songs of unusual depth and passion." But the Wulfing sisters' sound was still evolving, taking in such influences as Feist, Norah Jones and Imogen Heap. Signed to EMI CMG and renamed Tal & Acacia, the duo began work with celebrated CCM hitmaker Munro Jones (Chris Rice, Third Day). When released the duo's 'Wake Me' album was described as "a breath of fresh air - defined by catchy choruses - and girded in joy." Jones himself enthused about the girls' songs and performances. He stated, "I love this album; it sounds like an iPod commercial. I am moved by this music. We are all in the desert and not by accident today, and people are ready to hear something new and fresh like this."

One of the standouts on the album is "Top Priority". Said Tal, "'Seeking first the Kingdom' is the first line of the song, and basically for me, I struggle sometimes with making God the top priority in my life, and so he just gave me this song. It really inspired me and it still convicts me now. We always have a choice to make him the top priority or to put something else in front of it." Another highlight is "Merry Go Round". "I wrote it in Charlotte in North Carolina. We have a very big inner city ministry background, so we were there for a year in the 'ghetto'. It was just one of those phases where I was sick and tired of doing the same thing, you're falling and sinning and you just get so sick of yourself. I was just writing it from an 'Aagh Lord, I just want to please you' and it's really just, even with our everyday tasks God can make that full of life. I love the verse Psalms 16:11, 'In his presence is fullness of joy'. That verse sticks with me all the time. So 'Merry Go Round' is that reminder of 'Hey, we can live in freedom, wherever you work or whatever you do, we can do it with joy because of him in us'. It's, 'Hey, let's get off the merry go round, let's live life, let's run in those fields."

Wait - they had a third album???? Kumi? Heard of Black and White and Wake Me - are these girls going to spring any more surprises? So hard to find out what they are doing these days!