Temple Veil: A journey from screamo to an acoustic duo 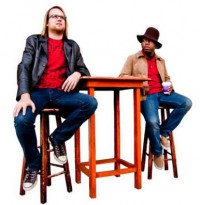 Of the thousands of Christian independent artists currently working in the USA only a tiny number ever get to play in the UK. One of the select few are the Tampa Bay, Florida-based duo Temple Veil who were recently in Britain performing at Cornwall's Creation Fest. Temple Veil have a far from usual lineup, consisting of acoustic guitarist Brysson Rockwell and electric violin player and singer DeRock Swaggert.

The group first came to Cross Rhythms' attention in 2011 with the release of the EP 'Unearth' on Razzbarry Records, the label formed by one-time Code Of Ethics band member Barry Blaze. At the time of its release Cross Rhythms' reviewer wrote, "It's a celebratory EP from the Florida-based duo with the aptly named guitar-based opener 'Party Song' proclaiming 'My God is King, My God is Lord, My God's forever' and setting the scene for a selection of musically accomplished and life filled tracks. [Other] highlights are the Celtic vibe of 'Goodness Gracious' and the gentle ballad 'Forgive Me'." Since that release Temple Veil have had a Christmas EP, 'One Star', and are currently working on a new project. They visited the Cross Rhythms studio to tell us their story.

Tony: I understand you used to play heavy rock. You don't look like a couple of headbangers.

Brysson: We sure were.
DeRock: Yes, sir. The band was called Post Mortem.

Tony: That sounds heavy. Did you give P.O.D. a run for their money?

Brysson: We did. We actually connected with those guys a few times.
DeRock: A five-piece band - Brysson played electric guitar, I actually played electric violin. I had a really awesome set-up with a screaming amp and everything. I also did some singing and back-up screaming. It was fun.

Tony: Did you go in for the growling?

Brysson: I didn't, but DeRock did. I haven't heard him do it for a while, but he can. 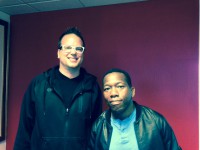 Tony: Now that you are an acoustic group touring must be much easier for you.

Brysson: We no longer have quite as big a trailer packed full of so many amplifiers.
DeRock: Post Mortem would be playing at like 11 or midnight, something like that; and now it's like five, six, seven pm - in some places four in the afternoon.

Tony: Do you ever long to ask the crowd to form a mosh?

Brysson: Believe it not, it has happened.
DeRock: There has been an accident or two.
Brysson: We had a crowd-surfing incident at one of our Temple Veil shows.
DeRock: It was the most interesting thing, being acoustic and all of a sudden - out of my whole experience of playing, I've never seen that happen before.
Brysson: They came onto the stage and kind of face-planted.

Tony: Tell me about the formation of Temple Veil. Why such a radical change?

Brysson: We actually wanted to continue forward with Post Mortem: Temple Veil was a direction we had not considered and didn't want.
DeRock: He's putting that very lightly. It wasn't on the map, it wasn't even a choice.
Brysson: The other three guys in Post Mortem left the group to pursue other things; we were the only ones left in the group, and we were looking for other members. A friend of ours in Tampa said, 'While you're looking for members, why don't you lead some worship?' 'That's not really what we do, but we can give it a shot; and it'll be something to do in the meantime.' We started doing that, in the Tampa area, and people responded to it. [Our friend] came along, saw us play, and said, 'I think I know why you haven't found members for Post Mortem: the Lord's drafting you into doing this'.