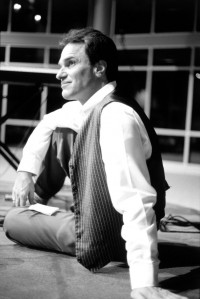 Tony: Many Cross Rhythms readers would have seen you on God TV ministering with Benny Hinn. How did you begin that association and what was your background prior to working with Rev Hinn?

Terry: Benny heard my CD 'Live Worship' as it was being played by his wife in their home. He said he began to cry and was crying for three days. From that point, he invited me to minister at his next crusade. I have ministered with him several times but my own ministry is growing to the point that I am not doing much for Benny these days.

Tony: I understand there is a new DVD coming out called 'For The Lord Is Good'.

Terry: We decided to video one of our Night Of Glory gatherings, which takes place four times a year at the World Prayer Center. We had a beautiful evening of praise and worship and this 56 minute DVD/VHS is the result.

Tony: What about the 'Can You Hear The Sound Of Heaven' album? Where and when was that recorded?

Terry: This CD is still a work in progress, scheduled for a late March release. Most of the recording is finished with some of the material coming from our first Pikes Peak Worship Festival last July in Colorado Springs.

Tony: You're unusual in that you are a piano-playing worship leader. Do you find sitting at the keyboards restrictive in your ministry?

Terry: I do not sit when I play and lead, I stand.

I was given a CD of your music more than 10 years ago. I am a worship leader. After singing with it for days in the anointing from it, I offered to harmonize with it at church meetings my husband were at as evangelists. I still find this the most angelic, anointed music I have ever heard! I have every CD. You are and have been an absolute blessing to us in our ministry as the presence of heaven - many angels, etc. come down and the prophetic and Seer ministries with mighty miracles have come to pass. My husband cannot sing on tune; but when we sing together, he sings in tongues in beautiful, perfect tune with me. Thank you for coming back! I have never given up! I will always use your music to worship wherever we may go.

When I was first introduced to your music a few years ago I knew you were a breed apart.There are many gifted gospel worshippers out there but God has certainly annointed you to bring nations to His throne.As a worship leader myself am I painfully aware that the enemy hates us with a passion, but Praise BE TO GOD who always leads us into victory.You bless my heart with these annointed songs and it always, always draws the presence and glory of our Mighty God into any situation..Keep worshipping my brother.

Terry, in 2003, I was given your Album "Visit Us" by a family member when at the time my husband was very ill; we were going to Duke for chemo treatments, and your music ministered to us so wonderfully! Tears are rolling down my face since reading of your situation, but pronouncement of hope and restoration are coming from my heart! God is well able to restore all that is broken in our lives! He loves us unconditionally, and He will deliver you as you cry out to him!

Will. Than you jesus for my brother healing and. Restoration dear brother in Christ lift up your face,your hand and look at the Lamb jesus our healer our Dr. For excellent he won't refuse a broken. Hearted stand up again you in the name of jesus and. Take. Yourplace. In the kingdom of heaven. Our king is your. Potter your. His. Jesus. And no body. CAN'T. TAKE YOU AWAY FROM HIM BE FREE IN THE NAME OF JESUS YOUR. SPIRIT SOUL AND BODY AMEN.

Glory and Praise to God! My heart rejoices to know that this wonderful and anointed Worship leader has returned and we do receive him with great joy. I am a worship leader and before Terry's music came into my life I was "just a worship leader." I bought every CD and all music from him to bring a whole new ministry of worship into the church. I have bought his music for many other churches and worship leaders as well both here and in Africa. Such a blessing! We have continued to use it through this season of Terry's life, praying and waiting until the time God would restore this gift to the body of Christ. That time has come and we are excited to to receive the new worship only Terry can bring. Thank God forever and God bless you Terry, my spirit sings with you!

we thank the lord for such a mighty worshipper in spirit and truth with songs such as i sing praises and what a friend ive found.