Testimonies Of Grace: Two lives changed by the power of God

An ex-basketball professional and a one-time member of the Triad crime gang, speak about how encounters with God changed them. 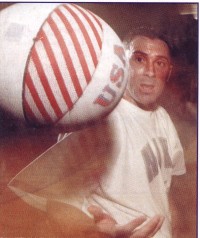 K P WESTMORELAND
As any sports buff will tell you, in America basketball is a multi-million dollar industry which seemingly keeps a whole nation glued to their TV sets. So, the activities of K P Westmoreland, dubbed the basketball evangelist, are guaranteed to catch many people's attention as he spins two basketballs on his fingers, or on long poles. But there's serious intent behind this man's stunning basketball antics. The 30 year old ex-basketball professional from Bethany, Oklahoma is a brilliant communicator who heads up YES (Your Eternal Salvation) and carries a passion to communicate the Gospel to youth... whatever the cost. He speaks about the mistakes of living the drug, sex and rock 'n' roll lifestyle from real experience.

In Breakaway magazine the evangelist recounted how once, before a crowd of young people in a South Dakota auditorium, God clearly spoke to him about testifying to a gloomy chapter in his life he'd have preferred to have forgotten. Reluctantly he obeyed. "I have one more thing to tell you," he told the audience. "Something I've never told anyone. It wasn't just the party scene that nearly messed up my life. There's more. When I was a young man, I got a girl pregnant. We were both ashamed of what we had done and wanted to cover up our mistake. Convinced that we had only one choice to make, we drove to a health clinic. And on a very horrible day that I wish I could forget, my girlfriend had an abortion."

The auditorium was completely silent as K P continued. "We didn't solve our problems - we ended a life. We made a decision that will haunt us for the rest of our lives." K P wrapped up his talk, telling how Jesus has forgiven him and his ex-girlfriend and how God offers the right choices. "It's up to us to obey him and make decisions we'll never regret." The gym thundered with applause. K P forced a smile, waved then slipped into the men's locker room. "Why, God?" he prayed. "Why would you have me tell that story? Nobody knew except my ex-girlfriend, the doctor and you. Why bring it up now?"

One year later, K P got an answer. He returned to the same South Dakota gym to share his basketball skills with a new crop of campers. Just as the athlete had finished performing and was packing up his equipment, a 16-year-old girl tapped him on the shoulder. "Uh, excuse me," she said softly. As KP turned around, he noticed that the teen was cuddling a baby in her arms. "I'd like you to meet my little boy," she said. "He's just six months old."

K P held the child, realising that the young mother had gotten pregnant out of wedlock. He looked the girl in the eyes. "I'm proud of you for not making my mistake," he said. "You didn't cover up your sin with another sin. You made the right choice by giving birth to this baby." The girl smiled. "It's all because of you," she said. "I was in the crowd last year. I sat in the back row, confused and depressed. I was thinking about getting an abortion until I heard your story. You made me think about how abortion doesn't just end a pregnancy; it ENDS A LIFE. I knew I couldn't do that." 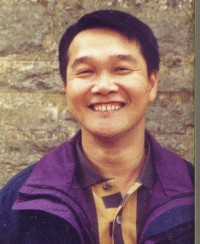 The young basketball player stood speechless, staring into the face of the wriggling baby boy. Tears began to roll down his cheeks. "Thank you, Jesus," he prayed silently. "Thank you for this child. Thank you for the obedience of this incredible girl."

REV JOHNNY LI
Johnny Li, a 42-year-old missionary with Open Doors, has come a long, long way since his childhood. At the age of 12 Johnny joined a Triad gang in Hong Kong. His life spiralled down into almost unspeakable degradation. "I was involved in bloodshed and torture. I was a big, big brother in the Triads. We would worship Satan, asking for power."

Johnny's life changed in 1972. "My sister took me to church and I heard clearly the Lord tell me three times to repent. Weeping, I knew that Jesus held the real power, not the occult, and I gave my life to Christ. The gang members would not accept this change. They could not believe I was attending church because I was a Christian, but rather that I had some scheme planned. Soon the local leader put out an order for me to be killed, because he was afraid that I was planning to reveal their secrets to another gang. God protected me and even though the church was in the heart of gang territory, I avoided my enemies. After a couple of months the threat wore off and I was able to meet with my former friends one by one and tell them of the wonderful change in my life.

"A few years later, a Christian who had escaped from China came to speak at my church in Hong Kong. 'The people have no Bibles,' he explained. 'In fact, many of them do not even know what a Bible is!' Although I feared and hated everything about China because of what had happened to my mother, I felt drawn to the people there. In 1978 my first visit made a lasting impression on me. People would reach out their hands and say, 'We need Bibles, but we have none.' How could I tell them I was just an ordinary Christian and that God had not called me to help? Fear and betrayal were so rampant in those days that some church services were held in total darkness to prevent one person from seeing another. This protected them from the informer, and also made it impossible for them to reveal names under interrogation, since they did not know who was present. A pastor might speak to hundreds of people at a time without being able to see any of them.

"A year later, I worked as a volunteer to be a link between foreigners and the Chinese believers working with different churches and organisations. I joined Open Doors Asia in 1986 to become a full time staff member. I began to establish a network for distributing literature inside China. Two years later I developed the Juniper Tree office in which we have a programme for short term volunteers to make courier trips into China to take in the Bibles and other spiritual books. Soon after, the Lord moved me to concentrate on training to teach and encourage the house church. I had become a link with overseas Chinese churches and pastors to minister to the needs of the house church of China."

Coming under surveillance by the Central Government, it became clear that Johnny was in danger if he made any more journeys to China. In 1996 Open Doors relocated Johnny's family to the USA. Johnny's heart remains in China however. "I do not know how, but I will eventually return to China to serve my people. It may be years away, but this is my calling."