The Afters: The Dallas pop rockers who are Never Going Back To OK 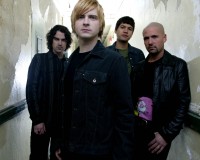 The release of 'Never Going Back To OK' by Dallas pop rockers The Afters has got industry observers predicting further big things for the band. Certainly, the group have come a huge distance since singer Josh Havens and guitarist Matt Fuqua worked honing their infectious pop rock anthems in a Starbucks in Mesquite, Texas. With bassist Brad Wigg and drummer Marc Dodd the band have risen to the big time with their "Beautiful Love" song having sold 239,000 digital downloads after it was used as the theme song to MTV's series 8th & Ocean and featured in the Lindsay Lohan movie Just My Luck.

The Afters will hit the road on a headlining tour of the US this spring with Falling Up, Everyday Sunday and Ruth as support acts. Josh Havens told Billboard, "We haven't changed our strategy or who we are one bit. When we started nine years ago we would play in churches and we'd also play in clubs, bars and high schools. We had a very diverse fan base from the very beginning. We are a band. We're Christians. Our faith is important to us and obviously elements of that are going to come through in the music that we write, but ultimately we are a band. We want to make great music and play for anybody who connects with the songs."

Josh spoke to the Jesus Freak website about 'Never Going Back To OK'. "We really wanted to make sure that our sophomore release was the right album for us to put out. We were committed to our fans to make sure that it was. We weren't just gonna put together a collection of songs and put it out there because we needed to meet a deadline. Our label really supported us, and our management. . . in taking our time and getting it right. Because you have your whole life to write your first record, and I think that's why so many bands have a sophomore slump. Because they don't take the amount of time they need to write their second album."

Brad Wigg added his thoughts, "I think it's probably a label issue too, because the label wants you to keep going with the momentum you had on the first record. There's so much pressure from the 'higher ups', y'know: 'Keep goin! Put the record out!' I can't say enough about our label that just describes how patient they've been, and how encouraging they've been. They've been so good about just encouraging us and making sure we had the right record. They could've just said, 'Okay put out another record right now!'" (Josh: "We need it!") "They could have just taken the songs we already had and said, 'Okay, here's your record!' They just said, 'We want you guys to take your time, we want you to get this right. Don't feel any pressure. Just make the record that you want to make and not something that we feel you need to make right now.'"

Both Josh and Brad enthused about the album's producer Dan Mukala. Said Josh, "He's amazing to me because he can do anything. He's got great pop-sensibility. He can pull off a Backstreet Boys record, or a Nick Lachey record. He wrote 'Incomplete' for the Backstreet Boys, which was a huge hit for them." Added Brad, "His heart is in programming beats, making really huge bass, danceable stuff. He really knows how to bring out the rock!" (Josh: "He's got a really eclectic side.") "We were in the studio making demos and we plugged in an amp and a cabinet and stuck a mic in front of it. I don't know what happened, but that was one of the best guitar tones I've ever heard recorded. It sounded so good!"

Josh spoke about two of the album's outstanding songs, "Secret Parade" and "MySpace Girl". "'Secret Parade' was a concept that Brad and I had. We liked the idea of an intro track that was a little out of the box. Started out as a joke based on a fictitious band name we used to spout off - "Sedulous Panoply of Ebullient Valetudinarians" which literally means "the secret parade of happy sick people." We thought that was actually an accurate picture of the Church through history. The Church has been plagued with problems throughout history and we live with the knowledge of our sinfulness. . . We are ultimately guided by God and covered by his redemption."

An animated viral video for "MySpace Girl" is featured, appropriately enough, on The Afters' MySpace page. Said Josh, "When we were writing this album, we didn't want to take ourselves too seriously. We just wanted to have fun and write about all different facets of life. Most of the songs came out of some kind of personal experience. 'MySpace Girl' is inspired by the story of how our old bass player met his wife. We were hanging out at a burger joint called In-N-Out after a show in California. And our bass player saw a girl there who was friends with a guy from one of the other bands that played that night. They made eyes at each other all night but he never gathered the courage to strike up a conversation. He was convinced that she was 'the one' and was so mad at himself for not talking to her. We just laughed and told him he was crazy to think that he was going to marry her. He did find out her name and searched for her on MySpace. He got to know her first through her profile. He knew her favourite movies, music, etc and thought they had a lot in common. They started messaging though MySpace, talking on the phone and eventually got rid of their personal MySpace sites and started a site together. . .hence the 'ourspace'. They are now married and are great together. It was just such a great story I thought there had to be a song about it."

The group first gained popularity under the name Blisse when they played a series of acoustic shows at The Door, a legendary Dallas club. "We wound up with 300 people at our first show and the crowds got bigger every time we played," Havens recalled. Agreeing to shift from acoustic to electric, Fuqua and Havens began looking for a drummer and bassist. Naturally they found what they were looking for at Starbucks. Dodd and Wigg, also employees, joined to play drums and bass respectively. The band's powerful performances earned The Afters a loyal following and for two years the band packed The Door consistently. Wigg explained, "We were able to draw people in at our live performances initially through our onstage charisma. Especially Josh. He has that sort of dreamy, wistful look of innocent vulnerability while maintaining a degree of confident charm. But when you break the show down to its elements there's a great deal of variety to be found. Josh sings, I sing, Matt sings, we have pop songs, we have really dramatic rock-your-face-off songs, we have sweeping, melodic ballads. There really is something for everyone."

In 2000, The Afters went into the studio to record a six-song EP. They sold all 2,000 copies in a few weeks and earned enough money to return to the studio to cut their debut, 'When The World Is Wonderful'. Independently released in 2001 the album sold more than 25,000 copies and became a staple on Dallas rock radio. The band knew they were onto something, but it was a show on Halloween 2002 that convinced Dodd. "That was when I knew I was finally going to be able to quit Starbucks," he said with a laugh. "We were on stage and all of a sudden the parts clicked into place at the same time. It felt like nothing could stop us."

The band were signed to a new boutique label, Simple, started by successful CCM company INO, given The Afters moniker because of legal problems with the Blisse name, and began playing stadiums with INO's big hitters MercyMe. It was when Sony BMG signed on to work the 'I Wish We All Could Win' album in the mainstream marketplace and the subsequent placement of the "Beautiful Love" that the band rose to the big time. Now with the buzz growing for 'Never Going Back To OK' more success for The Afters seems assured. Straddling as they do the CCM and mainstream marketplaces, Josh and his fellow band members are keen to convey hope to all their audience, both Christian and non-Christian. He said, "It all comes down to the fact that the God I believe in is a God of grace and forgiveness. That's what really separates Christianity from other faiths. God is loving and grants grace. He's involved in our lives and listens when we talk to him. Ultimately, good will prevail. We embrace fans that come from all different walks of life; we have fans from every faith that come to shows. I understand they believe different things, but all I can do is talk about, and all I can share, is about what has happened in my life. I'm never going to be somebody who argues with someone else about the faith, or tells somebody else what they should believe. I can only speak as to how God's impacted my life."