The Almost: The 'Southern Weather' hit created by Underoath's drummer

Tony Cummings reports on how a side project from Underoath's drummer Aaron Gillespie, credited THE ALMOST, turned into a major mainstream and Christian music hit.

The huge success of the album 'Southern Weather' by The Almost took the American Christian music industry by surprise. When it was released in the US in April 2007 there would have been few pundits who'd have predicted that it would soar to number one in Billboard's Top Christian Albums chart, even allowing for the facts that Florida rockers Underoath are today Christendom's best selling hard music band and that The Almost was a side project by Underoath's drummer Aaron Gillespie. The revelation that Aaron had in fact played almost all the instruments on 'Southern Weather' helped to increase expectation that the album would be an impenetrable vanity project by a percussionist with ideas above his station. Instead it turned out to be a masterly mix of crunching rhythms, anthemic hooks and radio friendly melodies. There's no definite date as to when Aaron Gillespie started The Almost. He made a MySpace entry on 1st October 2005 even before he'd released any music to the public and a couple of days later posted on MySpace two of his demos, both with intriguing titles: "I Mostly Like To Copy Other People" and "They Say You Can Never Write I Told You So In A Song But Here I Go" (truncated to "Never Say I Told You So" on 'Southern Weather').

In Infuze emag Aaron spoke about his decision to expand his musical activity beyond Underoath. He said, "I just wanted to write some straight-up rock tunes and my wife kind of prompted me to do it. I was in New York City one day and I told my manager. I said, 'Let me go demo up some songs,' and he put me in a studio and we started doing it and that night we got the tunes back and put them up on MySpace."

Responding to the suggestion that the album stemmed from trouble he was having with Underoath band members, Aaron was outspoken. "I feel like writers are just kind of digging for dirt. Y'know, like they want to hear that I'm oppressed by Underoath or that I'm tired of Underoath or Underoath drives me crazy or that. . . Y'know, I feel like there's a lot of that going on right now. I mean, I just had an interview right before this and they asked me the same question. But [The Almost was] nothing to do with that. I just really wanted to write some rock tunes and they don't really fit the Underoath format so I did it this way."

The reaction by Underoath's other members to The Almost was entirely positive. Commented Aaron, "In fact Tim (McTague) actually helped me write one of the songs and they're very supportive, so no complaints there. I mean, when you're in a band with a bunch of dudes you've been with for a decade it's kind of friends first, you know what I mean?"

'Southern Weather' was superbly produced by Aaron Sprinkle, the man behind Kutless, Thousand Foot Krutch, Starflyer 59 and a heap more hit Christian rock acts. Explained Aaron Gillespie, "Well, I was going to go with someone else and my A&R guy at Tooth & Nail mentioned him. We just started talking, over the phone, and it just seemed like the right fit. So we went ahead and ran with it. Aaron kind of helped me realise what I was trying to do. Because I had all these songs I had never. . . I mean, I played all the instruments myself but I had never really played it all together obviously. So he really kind of helped me realise what I was trying to do. It was really cool. I didn't have a band at the time; I didn't have TIME to get a band. So I wrote all the songs in the studio with Underoath. I always have this four to five week lull in between recording drums and recording vocals so I just decided to write all the songs to be productive, but obviously you can't get a band in that time so I just did it that way."

The album has some bold proclamations of Christian faith like the songs "Dirty And Left Out" and "Amazing Because It Is". So did it surprise the singer/multi-instrumentalist that 'Southern Weather' has received a great deal of interest in the mainstream? "Without sounding cocky, no. The reason why I say no is because, man, if you live your life honestly and you live your life transparent. . . I think people respect that. I mean, I respect someone who doesn't agree with me, who will come up to me and tell me they don't and give me a reason why. I'm not one of those type of people who is like, if you don't believe what I do and you don't feel how I feel then you're a jerk and you're going to Hell and you should just shut your mouth. I mean, I'm not that kind of person. And I think that people know that about me, at least I hope they do, y'know?"

The first video from the album "Say This Sooner" with its surreal theme of Aaron transporting through time with a special device called an iScape caught the eye of MTV who gave it heavy exposure. Scratch magazine asked Aaron about the storyline of both video and song. "They kind of tie-in together. The song is about people not really understanding who you are and what you're going for. It's similar in the sense that in the video, I find this weird device and I'm pushing this button and I'm always finding myself somewhere else and people aren't getting why I am that way. It's similar and different in the sense that the song is obviously not about a button that I push, but it's similar because it's about trying to find your spot and have people understand you."

One of the outstanding tracks on 'Southern Weather' is "Dirty And Left Out" which has a fine vocal sung by guest vocalist Jeremy Enigk, the frontman of the legendary emo band Sunny Day Real Estate whose albums like 'Diary' (Sub Pop, 1994) and 'How It Feels To Be Something On' (1998) are much loved amongst the rock cognoscente. Well known for his Christian faith Jeremy made his appearance on 'Southern Weather' almost as an afterthought by Aaron. He explained, "I kind of asked Aaron [Sprinkle] about it. Aaron and Jeremy grew up together, I forgot to mention that. I had finished the record and I was on the Warped tour with Underoath. Aaron called me and told me it was going to happen, so he took care of it from there." 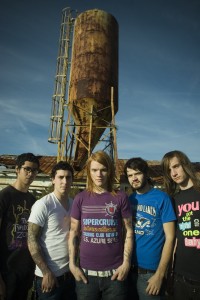 By that time 'Southern Weather' was released a band version of The Almost had been established with Aaron being joined by Jay Vilardi (guitar), Dusty Redman (guitar), Alex Aponte (bass) and Kenny Bozich (drums). Aaron explained to Ultimate Guitar how he found the band members. "My drum tech from Underoath had a friend named Jay [Vilardi], who is a really great guitar player from my area. So I contacted Jay and he found the other members for the band - they turned out to be guys I've known for years. Jay just put everyone together. He is also a musical director of the band."

The gigging version of The Almost are proving to be as popular as the album. After wrapping up a successful spring tour with Paramour, a string of shows with Say Anything and a stint at the Bamboozle festival, The Almost are currently part of the Vans Warped Tour of the USA alongside, of all people, Underoath.

Aaron was recently asked by Scratch magazine, "Is religion a factor in The Almost?" His reply was interesting. "I don't know if religion is the right word. In Underoath, we all believe that Jesus died on the cross for our sins and rose three days later. That's what I believe in every aspect of my life. Being a husband, being a father if I was a father, being a banker, being a musician, whatever I do I want to follow Christ the best I can to emulate his life. I'm not a perfect person, I'm just a normal dude who is trying to put his spot on the world, to find his place in the world, be a really truthful dude in all aspects of my life. I want to be honest and true and open about everything I do."

hey guys your music rocks! kenny, you know my brother, jason nigh, he says hi.

I think The Almost is an exciting new band.. I think that if you have never heard The Almost check them out.. I brought thier Freshman album and the album rocks my socks off. Every track is catchy and well done.. I hope that they sell more albums.. I wish them luck at Warped and in any other venues.. I hope that soon we get a Sophmore album.. I give this album two thumbs up..

Aaron by the way is so talented.. I am glad that he started The Almost.. It is a kin to Dave Grohl of the Nirvana starting The Foo Fighters which is one of my favorite bands.. Aaron almost playing everything on Southern Weather shocks me to the core.. His talent blows me away..