The Biz: Looking at the role of gospel concert promoters 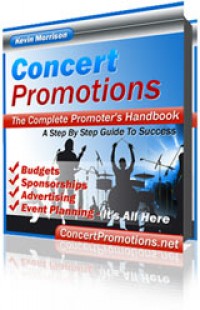 Love 'em or hate 'em, if there were no concert promoters there would not be a live Christian music scene in the UK. The concert promoter is probably the most widely abused role within the biz. Yet it's the people who fulfil this role who are most likely to lose money - serious money.

So why do people take on the responsibility of the concert promoter? "Because there's a real sense of achievement when you see a crowd of people really being blessed," said Les Wilkes, who has organised Midlands concerts for Tracey Riggan and lona.

"I believe concert promotion is a ministry and you'll need an administrative gift and a willingness to serve others. But it's a work more Christians, young and old, should be taking up in Britain. The music scene desperately needs 50 or a 100 new Christian concert promoters."

So what exactly do they do? The promoter takes on responsibility for all aspects of a live concert. It's quite a list: choosing and booking venues and artists; deciding on ticket prices; arranging publicity, stewarding, security, sound, lights, seating and even getting someone to make the tea. Choosing the right artist is probably the most difficult part of the job. Most promoters in the UK are church youth workers commissioned by church elders or councils to stage events relevant to younger people and so are amateurs who at their best are well informed (and probably Cross Rhythms subscribers!) but at their worst have been unwillingly pressed into service with no knowledge or gift in the area.

In choosing the right artist a promoter will need to take a number of factors into consideration. The first concern is the venue. Transparently, it would be as inappropriate to book a bill containing Amy Grant, Cliff Richard and Michael W Smith for Osbournby Parish Hall in Sleaford as it would be to book Ascent, Helen Jayne and Lifeline for Wembley Stadium.

The latter may be three very good artists going places, but even together this talented trio do not have the pulling power for Wembley. It would also be a gamble to book Amy Grant for Wembley. But gambles (don't you mean acts of faith? Ed) are what concert promotion is all about. You're never going to take the risk factor out of putting on live concerts," said Karl Allison, an experienced rock-gospel promoter who has over the years put on a dozen or more concerts in Croydon for artists including Phil Keaggy and Brussel.

"The thing most at risk is cash of course. Though if things go badly wrong your reputation gets shot as well!" Even the smallest of concerts using an amateur local band is likely to cost a three figure sum while bigger concerts with professional artists will usually involve a four figure sum.

It's scary enough when it's your cash which you're risking. But when it's your church's money, or money loaned to you by a Christian organisation, putting on a live concert definitely gets the nerves (wangling. Choosing an artist is obviously a crucial step. The rule of thumb here is cutting the cloth to suit the need, ie, identifying what is the potential audience - both in age and lifestyle and quantity - you're aiming for. Established CCM artists with plenty of Christian media profile and current CDs out like Garth Hewitt, Bryn Haworth, Martyn Joseph and Phil And John are all likely to sell tickets but, unfortunately, their styles are not musically relevant to today's youth.

Not a problem if you are looking for an audience aged 20 plus. If you are looking for a teen/early 20s audience it is" bands like Eden Burning, Brussell, The Electrics, Azimuth Brainstorm, Pity The Small Thumbs or one of the new 'rave praise' ensembles who will be more suitable. All too often church councils eager to put on an event look back to their youth ("let's get in Garth Hewitt for the kids") rather than researching current youth tastes. Consequently, they wonder why the youth doesn't turn up to their event.

Having chosen your artist, venue and audience type, it is necessary to decide on a ticket price. Caution here: a common mistake is to price low in order to encourage higher attendances. It does not work, and in fact has the adverse effect of putting people off. If you put a low price on an event you devalue it in people's eyes, and they won't think it worth turning up to. It may be worth doing some basic cost calculations - total cost of concert over the total number of seats available given the cost per seat (ie, a concert costing 300 in a 300 seater venue gives a cost per seat of Â£1.00.

However, even if you sell out, if your tickets cost Â£1.00, you will only break even. It is important to try and make a profit at events. Concert organiser Karl Allison is forthright in his opinions: "Profit is not a dirty word when putting on Christian concerts. Any capital made can be re-invested for your next concert. The problem is there is still a lot of terrible theology around concerning 'ministry' and 'entertainment'.

The argument goes that 'ministry', being a higher calling, should have no charge attached to it. The gospel is free' goes the emotive slogan. But in reality of course there's very little 'free' ministry - most preachers and Bible teachers are paid for their services and such a concept is entirely Biblical. The error occurs because people make a false distinction in their lives between that which is sacred . . . ie, ministry, and that which is secular . . . ie, entertainment, rather than allowing God to be Lord of all their lives."

Publicity is where a lot of Christian concerts go woefully wrong. Good publicity is trickier to achieve than at first appears. Publicising an event too early can be as bad as not publicising it at all. Magazines have free events listings - Cross Rhythms has its Gig Guide and Alpha has its Diary. Denominational newspapers might be worth writing to. Local radio religious programmes have what's-on sections, but don't restrict yourself to the Christian press. Most areas now have monthly listings or events-based art magazines. Local newspapers and radio can all be a source of free publicity to concert promoters willing to go and chase them.

Posters and mail-outs to local churches are also suitable methods of publicity. There are two things here to take into consideration. Firstly, get a graphic designer to design posters - don't let yourself down by poor artwork. Secondly, don't fly-post. I have seen several Christian artists fly-posted across the country. Not only are you destroying the local environment, you are breaking the law, bringing dishonour to God and risking being prosecuted for the event.

This information is very helpful, I want to be a gospel music promoter, but the major challenge here is the people's ideology especially when it comes to money, Don town how to cross that hurdle, but I really want to start somewhere, is there anyway u can help, any ideas or advice? Once again, thank u, this information is helpful

this is indeed very helpful. i am gospel singer and 2 years running have promoted my music events for nov 2011 and nov 2012, i advertised these as early as May. Can you please elaborate on your comment - "Publicising an event too early can be as bad as not publicising it at all".

HOW DO I BECOME A LOCAL,INTERNATIONAL,AND NATIONAL GOSPEL PROMOTER

Hullo! For a very long time, i have been yerning and asking myself as to how i can get to share information about promoting gospel music at international level until i visited your web site. I am a gospel artist from Uganda, who has been struggling to link up with the rest of the world in particular to get a promoter and exposure. Your idea is good and i would like to have and share a word with you.Advise me please.

I'm also a gospel music promoter and I want to promote some of Southafrican artists outside of SA,maybe we can work together

I have been trying to build my own business as a Promoter/Special Events Planner. I would like to work with someone who can help me get started. Do you know of anyone in the DC who I can connect with to help get me started? Please let me know the best way for me to get started.

Calvary greetings,
I am a gospel artist from Cameroon,I went through your website and I am interested in what you are doing to promote the Gospel music.I am also interested in joining your membership but do not know if it is possible for artists from this part of the world.I wish to take part in any of your concerts,festivals orseminars.we are struggling to do what we can here to promote the gospel through music,but it is not easy because,we do not have associations and organizations like yours that can expose the our work.so,if you can be of any help,that will be very grate.
God bless and have a nice day,while waiting to hear from you.
MIKE.

Thank you for this information as i do my research. I would like to take on this ministry of becoming a Concert Promoter for Gospel music in my area and your information was very helpful. I also have a friend in UK and would like to eventually look into international promoting once i get familiar to the work at hand. Thanks again.