A choir that grew out of a storefront church in Brooklyn transplanted to a venerable hall in Cardiff. Andrew Long went along to witness the event and speak to the leaders of THE BROOKLYN TABERNACLE CHOIR. 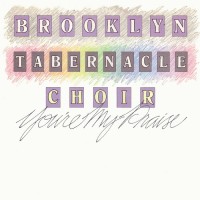 It was with considerable curiosity that I took myself off to St David's Hall in September to attend a free concert by The Brooklyn Tabernacle Choir. The multi-racial choir have long been a Christian music institution making numerous albums for Word and now Warner Alliance. While the PA was being set up I sat backstage and talked to two of the choir's leading lights, Wanda Geddie and Leroy Legions. Leroy began by telling me a little about the history of the choir as well as their church.

"The church itself grew out of a storefront, starting with about 16 people, with only three or four people meeting on a Tuesday night to pray. That has grown to thousands of people meeting together with one purpose, calling on the name of the Lord, asking God to send a great revival in their hearts and in New York and all over the world. The choir joins together with the other ministries in the church with that one purpose. We practice every Friday night. We always open up with prayer and God has used us tremendously by just laying before him. Some Fridays we just pray up until about 9.00pm. We might never get to rehearse, but that's fine because our first goal is to minister in any way God wants us to, praying for people, laying hands on the sick, mending broken marriages, bringing home runaway children. That's our main goal, just to be a vessel for God to use."

The choir's two most recent releases have been with Warner Alliance. Cross Rhythms' reviewer was less than impressed with their latest offering, 'Live - We Come Rejoicing', calling it a "thoroughly undistinguished album... which, even with half a dozen lead vocalists straining hard to show 'the anointing', remains limply unconvincing." He gave it two out of ten. I took the bull by the horns and asked Wanda to respond to his comments.

"The choir are not professional singers," Wanda explained. "There is an interview process to find out where you are in Jesus Christ because the choir is called upon to be ministers of the gospel, so we're made up of people who can carry a tune but who more importantly have the Spirit of God living in them and who are living for Jesus Christ. So reading that review was kind of funny to me because sometimes the Lord uses the simplest people and he often uses the foolish things to confound the wise. The anointing of God is something that doesn't discriminate. We're only too well aware that we're not perfect musically but to the best of our ability we're lifting up the Lord. When we look at ourselves sometimes we have to laugh because we think how could God possibly use this group of people, we're not vocally trained, we don't read music but we believe that the main thing is prayer and being focussed on God and then his anointing comes and covers all of our human frailties."

"We're not looking for any kind of awards or anything like that," chipped in Leroy. "We just want to minister to people so they can come to know God."

Of course, all of that could well have been an excuse for a mediocre performance, as so often happens when ministry is emphasised to the exclusion of musical integrity, but I couldn't judge without actually seeing the concert so I determined to remain unbiased and entered the auditorium.

I was stunned by the attendance at the concert. As far as I knew there had been little publicity, yet as I watched the crowd grew and grew until every single seat in the 2,400 capacity hall was filled, including the several rows of seats behind the stage, which I cannot recall ever seeing filled before. Outside on the first level foyer a further group of people sat watching the performance on closed circuit television, and still people were turned away!

The choir had brought 200 of its 240 members to Britain together with a small, but very tight, band who played about half the songs, the music for the rest of the set being provided by backing tapes. The music itself, mostly written by pastor's wife Carol Cymbala, is set very much around themes of praise and exaltation. Titles like "Healing In His Hands" or "Give God The Glory" would be equally at home if given the full, no holds barred, black gospel choir treatment, but the Brooklyn Tabernacle Choir don't fit into that category. Their's is a more laid-back, easy listening approach, making them a comfortable listen for a wide range of tastes. It's true to say that some of the lead vocalists revealed their lack of vocal training, but the overwhelming factor was one of honest sincerity, they genuinely believed in their ministry as a calling from God, and they were going to fulfil that calling no matter what. The testimonies of deliverance from drug and alcohol abuse, marriage problems and other situations added to their sincerity.

"We believe that in God there is no colour," Leroy began. "Christ sees no colour. We will stand for that. We sometimes have been criticised for being together like this but we don't pay it any mind because we know that in the end God is going to be the victor and whatever criticism we get we just grin and bear it and continue to believe that God is going to heal the people bringing the criticism and they're going to see Christ as we see him, as a spirit, we don't see any colour."

Wanda picked up the theme; "The fact is that when you become a Christian that becomes your identity and your standard, not your culture or your colour. We're all going to be in heaven together so how is it that we should be separated by colour and other such nonsense here on earth? If the Church can't be an example of unity to the world then Where's it gonna happen?"

Brooklyn Tabernacle has blessed me so much over the years, and its wonderful to see the beauty of The Lord reflected in having multiracial choir this alone speaks volumes of haven.
Remain Blessed,
Sharon Khan.