The Church Raps Back Part 2: The Christian scene's righteous rappers and holy hip-hoppers

Tony Cummings reports on ETW, JC And The Boyz and D-Boy.

Be it in the establishment, with the Gospel Music Association announcing they will introduce rap as a new category at 1991's glitzy Dove Awards, or the underground, with the first Christian fanzine emerging, Christian rap is flourishing Stateside.

Christendom's first female rapper has a hot new album, DC Talk are louder and decidedly funkier with their 'New Thang' set and there's even a Christmas gospel rap album planned. 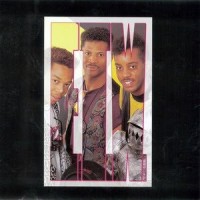 ETW: Warriors of the Word

It was last year that gospel rap really began to emerge as a major new movement. One group which first caught the ear with the Word UK release of their debut album are ETW (End Time Warriors). This trio from Tulsa, Oklahoma, mix on their Yo! Forefront debut 'ETW' heavy guitar power a la Run-DMC/Aerosmith remake "Walk This Way".

The group Johnnie Jam, MC Free, and MC L. King were formed in the spring of 1985 to compete in a local talent contest, this was the launch of their vision, reaching young people with a Christian message that expressed their social conscience. So, their music hits topics like drugs, AIDS education, motivation to succeed, and more. One ETW rap goes:

Another bunch of rappers with a UK release are JC And The Boyz. Their 'Never Give Up' on Broken Records is a light upbeat pop/rap album. David Guzman is the brains and the heart behind JC And The Boyz. When David was a young teenager, he started a club in New York City called Radio-Tron, going by the alias "MC Sin" which lead to a street life of drugs and crime. Upon moving to California, David met a girl who took him to Harvest Christian Fellowship in Riverside. His life would never be the same.

David, having grown up on the streets, instantly took back to the streets this time with a new street name, MC Scroller, and a message of life and hope through Jesus Christ, with the musical language he and his target audience understand best.

The Boyz have taken their message to the ghettos of Chicago, Philadelphia, New York and Los Angeles. They have been on tours with Rosey Grier, Nicky Cruz and many other evangelical crusades. After three years performing together, The Boyz have signed to Broken Records. With their release 'Never Give Up,' The Boyz are determined to use the quick beat and hot dance tunes to resuscitate kids with the message of life.

A more hardcore and street level form of rap comes from SFC (Soldiers For Christ). SFC's Chris Cooper, called Super C, was raised in a neighbourhood of LA where it's physically impossible to avoid the influence of rap music "People blast it out of their cars, and boxes, the music is everywhere." A DJ before he became a rapper, Super C is "out to reach drug sellers, club hoppers, people you wouldn't find sitting down and listening to a church choir. But they'd pick up a tape and listen to my rap, because it's in a style they're familiar with. It's important to let people know that you can follow Christ and still have a good time."

SFC's debut on Broken Records 'Listen Up', is going to be considered light compared to the next one just out in the States, 'A Saved Man In The Jungle'. "We're talking black music, we like a lot of bass so we can pump up the bass so it's something that people on the streets can relate to. It's got a lot of heavy scratchin', the whole nine yards."
To the uninitiated, Cooper suggests that the first listen may not be all that clear.

"The first time somebody hears it, all they're going to hear is the beat, and me rapping. But when it gets old to them, and they start hearing what I'm saying they'll begin to pick up all the Scripture I put into my music." Rap, he says, is not as easy as it appears to the outsider. "In rap you have to tell a story, and it has to make sense. And since it's Christian rap it has to be true, and it has to rhyme at the same time, and you can't repeat any of the words."

Possibly the toughest of all the tough cuts of 'A Saved Man In The Jungle' is "The Bomb". Seldom has 'confrontational evangelism1 been taken to such limits as Chris Cooper lambasts secular rap's sleaze boys: