The Civil Wars: Indie folk hitmakers thanks to Grey's Anatomy 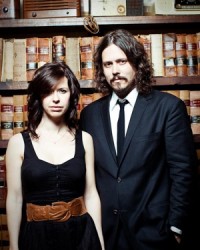 The announcement that America's chartmaking duo The Civil Wars are booked to play London's Queen Elizabeth Hall on 31st May should come as great news to lovers of Americana/indie folk. The Civil Wars' studio album 'Barton Hollow' debuted at number 12 on the Billboard mainstream album chart and critics have been falling over themselves to praise the album's haunting songs, deft acoustic rhythms and the rich blend of John Paul White and Joy Williams' voices, which at times resemble another memorable country-tinged duo, Buddy and Julie Miller.

John Paul and Joy met for the first time in 2008 at a songwriters camp in Nashville. John Paul was a solo singer/songwriter based in Muscle Shoals, Alabama with one album, the gritty 'The Long Goodbye', under his belt. Joy was something of a done-it-all, seen-it-all fixture of the Nashville CCM scene who had released albums through Reunion Records - 2001's 'Joy Williams', 2002's 'By Surprise' and 2005's 'Genesis' - before becoming a prolific independent artist who in 2009/10 released an amazing four download EPs and an album. Joy still vividly recalls that first encounter with John Paul. "I got a call for what's called a writing camp, where several writers were called together to work on trying to write several radio singles for a particular country band. Though I lived in Nashville, I worked mostly in LA and came more out of the pop world, so I was like, why did they call me? John Paul definitely wasn't bringing a Music Row sensibility in when he was coming into the write, either, but neither of us knew that about each other. In that room, it was almost 20 writers, basically drawing straws and getting to know each other a little bit. And when he started singing, I somehow knew where he was heading musically and could follow him, without ever having met him before. And that had never happened to me."

John Paul takes up the story. "I've done lots of co-writes and collaborative situations, but I'd never felt that weird spark, that weird familiarity like we'd been in a family band or something most of our lives. The beautiful part of it was that neither one of us would let on, so we both played it cool for a while, saying 'That went well, we should write another', and so on. I worked up enough nerve to - so to speak - ask her out. But there was a lot of scuffing my heel on the floor and 'I don't know what you're doing for a while, but I've got this guitar, and you sing pretty good, but you probably don't want to. You're so much better than I am. Never mind. I'm just gonna go.' Luckily she felt the same way."

So The Civil Wars was born. A few months later the duo played their first gig at the French Quarter CafÃ©. In the audience was one of Christendom's most gifted record producers, Charlie Peacock. The gig went so well that another, at Eddie's Attic in Decatur, Georgia, was quickly arranged. Astonishingly, the duo, flying in the face of accepted music biz practice, recorded and released the concert. The album 'Live At Eddy's Attic' was a free download containing eight originals plus a cover of Leonard Cohen's "Dance Me To The End Of Love". Remembers White, "We didn't even rehearse that much for that show, and we were flying by the seat of our pants. But the sound guy at Eddie's is legendary for doing really great board takes, and we listened to the tape on the way home and were pretty amazed at the quality of the recording. So we thought, 'What the hell, let's see what other people think about it.' The beauty of putting that thing out as early as we did is, we could always fall back on: 'Well, it was our second show'," he laughs.

"Looking back, John Paul and I can't believe we put out our second show ever," Williams says. "Hopefully you can hear the growth from then to now. But I'm really glad that we did. To get emails now like, 'A buddy of mine in South Africa just sent me "Live At Eddie's Attic"', or somebody coming up to us and saying, 'Yeah, my friend in New Zealand was the one that told me about you guys' - in Alabama, where we were doing a relatively local show - that really took us by surprise, the way it started a conversation nationally and internationally."

The 'Live At Eddie's Attic' release also had some other happy, unintended consequences. Williams feels that the loose chatter between songs helped establish that, as amiable personalities, quite different from some of the dark, broken heart themes of some of their songs. Playing gigs accompanied by just John Paul White's guitar and Joy's keyboards gave the duo a stripped-down focus. Says White, "It's so much easier for two people to get into a car. But it just felt like releasing that record with just the two of us also put that stripped down, more organic, more raw kind of sound in people's minds. And we felt like it was more emotional and told the story a lot better. It's just she and I and a guitar and piano. If there's something that is lacking, it's gonna be painfully obvious. So the songs' guts have to be strong, at least for us, from front to back."

No frills means no distractions from the quality of their blended voices. "It's the strangest thing when I sing with her," White says. "Even the things we do with vibrato, typically, they're the same - we speed up and slow down at the same pace. She'll ad-lib something live, and the next time around, I'll sing the harmony to it. But if I sat and thought about it, I couldn't do it." For Williams, who's sold hundreds of thousands of records recording on her own, sharing the vocals is "one of my favourite things about The Civil Wars, because when you're a solo artist, you can't harmonize while singing the lead. To me, all harmony is active listening."

The attention grabbing song on 'Live At Eddy's Attic' was the captivating "Poison & Wine" which spoke of the delight and the despair of a tangled relationship. It's lyrics went, "You only know what I want you to/I know everything you don't want me to/Oh your mouth is poison, your mouth is wine/Oh you think your dreams are the same as mine/Oh I don't love you but I always will/Oh I don't love you but I always will." 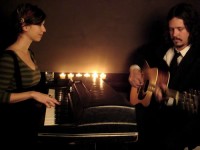 "Poison & Wine" fits the paradigm of subject matter too true to be spoken, as opposed to sung. "That song probably does sum us up - The Civil Wars, the name of the band - as well as any song that we've written," White says. It's the one song on the album written with an outside collaborator, their friend Chris Lindsey. "We're all married and we were all talking about the good, the bad and the ugly, and just felt like: What would you say to someone if you were actually brutally honest - the things that you could never say because it would turn them away or let the cat out of the bag or reveal yourself to be weaker? What would you actually say if you had this invisible curtain around you and could just scream it in somebody's face and they'd actually never hear it? We were all being very painfully honest, because we're all very comfortable around each other and know that things like that never leave the room, except in a song. I'm pretty proud of that song, to be honest."

Grammy Award-winning Charlie Peacock had begun recording the duo at his Art House studio. It was just as well that he did because television producer and writer Allan Heinberg heard "Poison & Wine" and decided to use the entire song on an episode of the smash TV series Grey's Anatomy. John Paul remembers ruefully that the duo only found out the show was going to use the song four days ahead of the programme's transmission. John Paul told a broadcaster at the time, "We were not prepared whatsoever. We didn't have [the song] up on iTunes, we had no video done, we had nothing." Remembers Williams, "We set about getting the song uploaded to iTunes, and then we literally linked arms and said, 'OK, let's try and record a music video'. So we did that in an afternoon. As it was being uploaded onto the Internet, we were watching the episode of Grey's ... and we were watching the [upload bar] get further and further and further. And down almost to the second that the last note of the song played ... [the video] was uploaded to the Internet."

The rush-released four-song EP 'Poison & Wine' was released two days after the Grey's Anatomy episode and debuted at number four on the iTunes Singer/Songwriter Top Albums chart, peaked at number 31 on the overall chart and was selected by iTunes as the Best Of 2010 singer/songwriter album. Suddenly, demands for The Civil Wars were coming in thick and furious. The duo was selected as Paste Magazine's Best Of What's Next and performed the song "Barton Hollow" on The Tonight Show with Jay Leno.

The huge success of 'Barton Hollow' has not only brought success to The Civil Wars but also to Sensibility Music. Joy Williams and her husband, Nate Yetton, who has a background in marketing and public relations, founded Sensibility Music in 2008. She says they "risked literally everything we owned" in the start-up of the company. "We're not calling it a record label. We're calling it a music company, because it's just me as an artist and him as a marketing person. CD sales have continued to go down but iTunes and the Internet are a great resource. I've been able to engage people on Twitter, Facebook and MySpace, keeping conversations going. Free downloads have been a great thing. This forces all of us to really roll up our sleeves and make music that matters. Gone are the days of white collar music. It's now the era of the blue collar musician. This forces us to be ingenious and think outside the box."

Williams says she's grown through the recent adventures. "I think your faith is always stretched when you venture into something new and foreign, like when you get married. My faith has definitely shifted a lot since I started making music. I was much more vocal about my faith. But as I got older, I've learned to live out my faith. I feel it's more important to live out practically the mantras of what you believe rather than just talk about it. I've found it to be an exciting journey. It continues to be deep and personal to me, and it goes beyond words."

And what is Joy's perspective on the CCM industry? She says, "I'm not that involved [in CCM] anymore, but I haven't made a point to separate or move away from [Christian music]. If it's something I can lend my hand to, and I feel good about it, I can do songwriting with any genre of music."