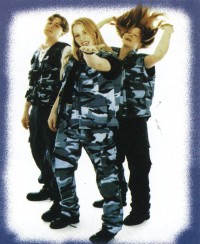 Anyone who's heard the steaming mix of K&B. garage, house, drum'n'bass and hip hop on The DNA Algorithm's 'Doing A New Thing' EP will know why UCB Cross Rhythms are giving it HEAVY radio support. Here is music bristling with creative flare and street savvy a long way from the bland conformity of much of the product from the large CCM companies. But behind the hip music is a zeal for serious spiritual ministry as befitting a band sired by seasoned missionaries and church planters. The true originators of the band are pastors John and Molly Bedingfield who today handle the group's management. Molly says she always knew that there was a powerful spiritual destiny ahead for the group s lead singer.

"Our family has been totally in music since Daniel's conception. I used to sing prophetic songs to Danny in the womb and the first time I felt him kick was during spiritual warfare against Buddhist principalities outside a temple in Thailand. By nine years of age God had already instilled in Danny a clear, strong, burning passion to change the world around him for the glory of God through his music. He started writing songs and raps about issues such as abortion and drugs and purity " opening doors for him to minister as a soloist starling with The Wades who presented him in their Gospel Night Spot as Danny B."

Such was the musical gift so generously bestowed on the Bedingfield family that his young sisters soon joined him. "Natasha became determined to accompany her brother on stage and before long he couldn't do without her. Danny and Natasha began singing around Europe and in 1996 they won the Inter-College Singing Competition with a song called 'I'm Gonna Do It Right Girl'; (a song about honouring women and saving sex for marriage). Three years later Nikola showed the same desire to reach her generation and the group harmonies took on a new dimension. The events after this, such as singing with Delirious? and other welt known groups in various festivals, nightclubs and churches, kept getting more and more exciting and everything has been going crazy since we released our first CD. We've recently been invited to sing alongside Out Of Eden, MIC. Audio Adrenaline and All Star United. We're waiting to see what God does next,"

How, I asked Danny, did the band come up with such an unusual name as The DNA Algorithm? "DNA is the genetic make up, the basic building block of your body that tells it what to look like. An algorithm is a mathematical formula, a process of change. We believe that together, as the body of Christ, we can change this world at its roots, not just at the hallelujah, hands raising part. Join the algorithm of God's army and change not just your generation, but the world for the glory of God."

I asked this extraordinarily talented singer, mixer and producer to tell me a bit about his parents. "Dad has been our manager for six years and all decisions have been made as a family. Mum and Dad have used their ministry as a springboard to help launch ours. First of all, wherever they spoke we sang and then later, wherever we sang, they spoke. Mum and Dad have pastored a church in Brixton for 10 years which we have actively been part of, having come from New Zealand eight years before as Christian workers. We've sensed the power of families working together and have prophetically ministered together as family to show that it is possible and can be very fruitful. We feel there is a special anointing that can come on a family to make it more than the sum of its parts."

In an age when many Christian bands still sadly compromise at the chance of a big record deal, the band are hearteninglv adamant about the need for their songs to remain full on gospel.

Remembers Danny; "We turned down EMI once when God told us the timing wasn't right. Maybe one day EMI will offer to sign us up again and agree to sign up our uncompromising message at the same time.

Their superb recording was in their words, "A supreme act of sacrifice and support." They ran through the recording origins of the six songs. "We owe the recording totally to other people's generosity. The first track we recorded was 'New Thing', recorded as part of an album to be released to bring aid for Southern Sudan. It's a cover of an old DC Talk song. It was produced by Zarc Porter and Tony Cummings in Perfect Music studios up in Manchester. Zarc generously donated the studio time for free.

"The next track to be recorded was 'I know'. We had to pay for the studio expenses for this one. Danny co-produced it with Lloyd Wade in a little studio in Deptford. We were able to record the next four songs with the Psalmist at Redland Studios at no charge. For this we are incredibly grateful. Daniel wrote all the songs, programmed all the music and co-produced the whole EP apart from 'New Thing1, with occasional help from family and friends. He worked for hours on his computer and synthesiser. The artwork was donated by Colse Lewng in Bristol and photography by Joachim Sefzick from London.

"We put Â£3,000 into the project which is the cheapest amount we've ever heard of for an album of this kind. The entire amount came from friends and family all over the world who have owned our vision and supported us as a family in ministry."

How dots a band, eldest (Danny) 18 years, youngest (Nikola) 14 years, understand their call from God? "Our number one vision is to lay down our own goals and dreams and tell God we are willing to do whatever he wants, whatever the cost and have our lives at his disposal. God as been calling us to feel the pain of the 'Christian' youth all over the world who don't really know Jesus yet and to do everything in our power to share with them the victories of the Christian walk from a 'now' viewpoint, in the language they understand. Many of our generation have gone to church all their lives, many have been taught all the right Bible verses but comparatively few have a true understanding of the realities of the Cross, victory in every day life and passion for Jesus. As a band, our main emphasis is to call this generation to 101 per cent-ness for God, family unity and to sing with them the words of Delirious?: 'I'm not ashamed of the gospel'. We've realised that music and media have become one of Gods most powerful tools to reach the world. We jumped on the bandwagon as soon as God told us to. We are called directly to the youth in the twilight zone between fairyland Christianity and barbaric-paganism. We are both evangelists and encouragers