The Dixieaires: A neglected jubilee gospel group who once made the R&B charts 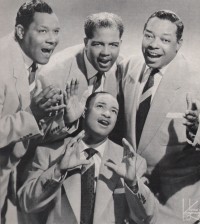 Despite the fact that gospel group the Dixieaires had made the R&B charts way back in 1948 and their founder and lead singer Julius Caleb Ginyard went on to have secular R&B success with the Du Droppers and was later a member of one of the most respected lineups of the Golden Gate Quartet, the once popular group have been largely forgotten by today's historians. They aren't mentioned in either Bil Carpenter's Uncloudy Days: The Gospel Music Encyclopedia or Steve Turner's An Illustrated History Of Gospel. Their recordings too seem to have slipped from view. There are no CD reissues of the Dixieaires tracks currently in catalogue and it was only in the late '80s that Heritage Records released two vinyl compilations 'Let Me Fly' and 'My Trouble Is Hard'. Yet despite this neglect the Dixieaires remain an important and talented ensemble.

During the 1940s the close harmony style gospel music known as jubilee was reaching mass audiences undreamed of when it first emerged in the 1920s. Groups like the Golden Gate Quartet and the Jubilaires were not only hugely popular among African American church goers, they were breaking through into mainstream (white entertainment) appearing in movies and radio shows alongside such luminaries as Bing Crosby, Arthur Godfrey, Amos & Andy and many more. But when in 1947 Bill Johnson from the Golden Gates joined the Jubilaires tension erupted between the Jubilaires and their lead singer Caleb Ginyard. Ginyard - born in 1910 in St Matthews, South Carolina and who had sung with the Royal Harmony Singers (the group that developed into the Jubilaires) in Florida as early as 1936 - decided to leave the Jubilaires and return to New York taking with him the Jubilaires' long time manager Charles Newsome.

In the Big Apple Ginyard looked around for singers for a new group, the Dixieaires. He got together two singers, Joe Floyd and Jimmy Smith from the Silver Echos who were one of the well known quartets from Newark who rose to local popularity with the Southern Sons and the Coleman Brothers during the late 1930s. Ginyard also got the Silver Echos' accompanist, guitarist Abe Green, who was a friend of longstanding. Green came with impeccable credentials as an accompanist for a jubilee group having worked with both the Golden Gates and the Jubilaires. For a bass singer the Dixieaires added Thomas 'Johnny' Hines. Hines came from Atlanta where he joined the Reliable Jubilee Singers when they started touring in the mid '40s. Abe Green remembers Hines as a particularly fine singer. He said, "I liked Johnny's voice. He was apt and he was willing. He was a nice guy, easy going. He liked to sing."

After the group rehearsed for a short time, Ginyard and Newsome used their connections to get the group on the road. They also got the Dixieaires the recording deals and radio shows needed to get them known. In October 1947 they entered the recording studio in Newark and recorded such songs as "Precious Memories" and "Down By The Riverside", eight sides being released on either Continental or Lenox. In 1948 Exclusive Records asked the Dixieaires to come to Los Angeles for more recording. While in Los Angeles the group met up with the Jubilaires and continued to do extensive recording. The group performed a lot of the same material that Ginyard had done with the Jubilaires, either on record or transcription, but this seems to have created no tension between the two groups. In addition, Ginyard was a songwriter who would constantly come up with new material to record or create new arrangements for older jubilee songs. Jimmy Smith remembered, "We all had been singing jubilee, ready to go sing. A lot of these records we did in Los Angeles, we just got together in the studio. Ginyard was the songwriter. He'd write the song and we'd throw it together in a little while. Mostly those recordings we did were something we just threw together then."

Despite the quick nature in which many of these recordings may have been laid down, they show the fine touch of one of the masters of this style of jubilee. The quartet was in such demand to record by so many labels they even went under the name of the Angel Voices for some recordings. Travelling by car, the Dixieaires made several extensive tours of the country. At the beginning of 1949, The Chicago Defender noted a tour of 22 States was scheduled to begin: "NEW YORK - The new sensational recording artists, the Dixieaires, are in the throes of preparation for a 22-State whirlwind tour beginning in mid-January and lasting eight weeks, it was disclosed here last week. On the tour their schedule will include various army hospitals and military instillations. The jaunt will end on the West Coast, they are expected to remain for a week's engagement."

Jubilee singing also was performed in a very different style from that of the emerging gospel singers who would walk all over stage and out into the audience like the Blind Boys. The Dixieaires remained formally dressed and had developed a tightly honed, but subdued stage act modelled on that of the Golden Gates, as Abe Green remembered: "One thing I liked about the Gates, we had tuxedos all the time. That was our dress. Of course, I didn't like it then. It was like being in a furnace. August, July, whatever it was, we had to wear that tuxedo. The little choreography that we did. . .which was nothing, but the way we did it was so precision like, it made us look good from an audience standpoint. We only had one mic. Not like now where every singer has his own mic. We had a stationary mic (with all four singers gathered round it) and sometimes I'd have a little part in the vocal. Each one had to take his turn at the mic. The way we did it was like clockwork. We'd take a break and whoever would go in and deliver his 16 bars or eight bars, he would move right in and move right out. It was amazing. We didn't have no choreographer but we rehearsed and rehearsed until we got it down to that. A lot of people came to see us work on the stage, not to listen to the spirituals!"

The only difference for the Dixieaires who took on the same style of concert performance is that they wore business suits instead of tuxedos. As Abe Green commented, the Dixieaires had similar audience response. "We'd bring the house down though we never did reach the big time like the Gates or the Jubes. . . Our method was as soon as we got in a big city, we would broadcast and let the citizenry know we were in the city. If all the folks handling [the booking] did a good job, standing room would be hard to get. People would be all up in trees to see us. It was fun those one nighters as long as you were getting along harmoniously."

The only surviving newspaper review of one of their shows is from the Houston Informer for 30th July, 1949 in which a reporter gave a complete rundown of a programme the group gave in Galveston: "The Dixieaires of New York City appeared at the Wright Cuney Community Center auditorium Monday night, July 25 before a small but appreciative audience under the sponsorship of Rev F A Allen, pastor of the Mount Calvary Baptist Church. . . The programme included the following numbers after the theme: 'Moving Up The King's Highway', 'Swing Low Sweet Chariot' and 'Don't You Wade In The Water'."

Throughout 1949 and 1950 the Dixieaires recorded well over 30 sides for a wide variety of labels including Welford, Sittin' In With, Exclusive, Prestige, Gotham, Lenox, Sunrise and (as the Angel Voices) Derby with seeming little regard for contracts. For their part the record labels seemed disinclined to pay the group beyond a small session fee even though the Dixieaires enjoyed an R&B chart hit in 1948 with "So Long" (Gotham) while their songs "Joe Louis Is A Fightin' Man" and "Traveling All Alone" also sold well. By the end of 1951 the Dixieaires had disbanded, finding that their touring and recording were insufficient to support their families.

Johnny Hines briefly joined secular R&B group the Dominoes. After the Dixieaires disintegrated Ginyard stopped singing for a while, opening a record store in new York City. But he couldn't stay away for long. Pretty soon he got together with a few other singers and another group emerged, this time totally secular; the Du Droppers. The Du Droppers made several fine pop and rhythms and blues recordings most notably a hit for RCA called "I Wanna Know". This group broke up in 1955 and, with things coming full circle, Ginyard joined the Golden Gates in Europe taking the baritone narrator role made famous by Bill Johnson. Many people believe that this lineup of the Gates was one of the strongest that they ever had and the numerous European recordings from this time period are justly prized. Ill health forced Ginyard to leave the group. He continued to work as a solo performer in Switzerland from 1971 until his death on 11th August 1978 in Basel.