The End Of The Beginning: Website success puts CR magazine on hold 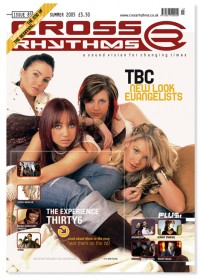 This poignant phrase from Sir Winston Churchill aptly sums up the season that the Cross Rhythms ministry finds itself in. After more than 20 years pioneering Christian music and media in the UK we feel we are in a time of re-positioning for the next season - one in which all those years of faithful foundation laying can now be built upon to greater influence and effectiveness in our call to share the Christian message through the contemporary platforms of music and media.

What do we mean? Well, great developments and changes are taking place at Cross Rhythms and we believe we are being clearly focussed on the direction we need to take in this next stage:

1. In April, after 23 years producing Christian radio programmes both for mainstream and Christian radio stations, and for the last three years pioneering a full time community FM radio station in Stoke-on-Trent, we received the incredible news that we had been granted a full five year licence to broadcast an FM radio station in the city. There was a real sense that this was affirmation and confirmation from both God and the governing body of Ofcom. We had "grown in stature before God and man." And indeed it is a jewel of an opportunity because this model of Christian community radio is something we are already in discussions to reproduce in other parts of the country. (For more information read the Radio section in this feature).

2. Then in June, after more than a year of redesign and re-concepting, and 10 years after the very first Cross Rhythms page appeared on the internet, we finally re-launched our website to significant acclaim. The feedback we have received has been amazing and the confirmation of the role of our website in the future of this ministry is clear. (More on this in the Website section in this feature).

3. With the launch of the website one thing that has emerged is its strength to communicate about Christian music. Gone are the days of waiting two or three months for your CR mag to pop through your door, to give you a limited number of reviews and only 10 articles. Now every day music news, articles and reviews are added to the Cross Rhythms website. And if you want information on just one artist you can upload all the info we have on one page - articles, reviews and news stories from the last 15 years of writing about them in Cross Rhythms magazine! Plus audio samples of radio playlist tracks, contact details and of course the ability to buy product right there and then (at the cheapest of prices, most being at only Â£9.97!). All from one page on the CR site.

Having seen the versatility and power of the new CR site, and alongside that recognising that it has been increasingly difficult to sustain the Cross Rhythms magazine over the last few years, we have gradually come to the conclusion that it is now the right time to put the Cross Rhythms magazine on hold indefinitely. We are not saying that the magazine has come to an end. In fact we believe that one day it will return. However we believe we need to focus on making the website and radio station strong, and we do not have the resource to carry the magazine with us as we do.

Over the 15 years of the magazine's history, for many of those years, it has been at the forefront of the Cross Rhythms ministry - pioneering to keep a voice for Christian music in the UK, standing in the gap to raise awareness of the numerous gifted musicians here in the UK and abroad. With the advent of the other media platforms of Cross Rhythms radio and website, increasingly the ability to hear music and access music information straight away has meant their role in being at the pioneering edge of Christian music has superseded the role of the magazine in terms of raising awareness.

In time however, as these new media platforms increase the market and audience for Christian music, we believe there will again be sufficient demand for the magazine but this time primarily for the expanded in depth coverage and profile it can offer. One of the primary visions of Cross Rhythms is to be able to position Christian music and media in the marketplace outside the Christian Church, as well as within. It is our opinion that when the magazine returns it will be better able to engage with a readership who do not attend church but love the music they hear through Cross Rhythms.

Whether you are a long time reader and supporter of Cross Rhythms magazine, or you only rustled its pages on the last issue, we want to thank you for sharing this aspect of our journey. We hope that the magazine has been a spur to you to discover more about Christian music. We also really hope that you won't lose connection with us. We want to encourage you to take these steps with us and use the incredible resource of the Cross Rhythms website and radio station to keep your awareness and interest in Christian music alive. If you're new to the site don't panic! It's one of the easiest sites to use, which is amazing when it's got over 25,000 pages worth of info on it! We believe the internet is going to be hugely influential in the coming years and it's time to ensure that we can stand up and be counted with the best of them.

So, here we all go on another exciting venture. Our bags are packed, our boots are on. It's time to pioneer new territories and make the land produce a harvest. Let's do it together.

After three years as one of the pioneering pilot stations for Community Radio, on April 20th 2005, Cross Rhythms City Radio received the fantastic news from Ofcom that they had been awarded a brand new, five year licence to broadcast FM radio across Stoke-on-Trent and Newcastle-under-Lyme.

Said Chris Cole, Cross Rhythms CEO: "We couldn't be more thrilled and it is such a release of encouragement for the whole team. The hard work and dedicated commitment the team has put in over the last three years has been richly rewarded. It is also wonderful confirmation for us that our vision and heart for community radio has been so affirmed by the governing body at Ofcom".