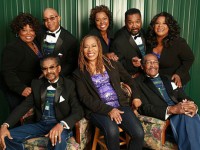 The finale of Perth's Southern Fried Festival - a celebration of American roots music that is now in its eighth year - saw legendary gospel vocal groups the Fairfield Four and the McCrary Sisters take to the Scottish city's Concert Hall stage last Sunday in an event that closed a memorable weekend in rip-roaring fashion whilst continuing a longstanding musical legacy shared by the two acts.

Dubbed Rock My Soul, the evening kicked off with both the Fairfield Four and McCrary Sisters - inextricably linked through the siblings' late father and Fairfield Four stalwart Sam McCrary - walking on stage to rapturous applause to perform an a cappella version of "Come In This House" before the McCrarys exited stage left to leave their father's old group to declare that "this is church."

Continuing in that vein, Bobbye Sherrell along with fellow tenor Levert Allison, baritone Larrice Byrd and bass man Joe Thompson - all clad in their trademark combo of work dungarees and tuxedo jackets - managed to extract some hallelujahs and amens from an initially reticent but eventually game Perth crowd before launching into an up tempo and handclap-driven set of spirituals that left the audience in no doubt that this was an evening of praise as much as entertainment. A number of songs in, the good-humoured Levert Allison won the crowd over by leading a stunning version of "Swing Low Sweet Chariot" and a combination of their trademark quartet harmonies and onstage camaraderie made up for their failure to perform "Lonesome Valley" - arguably their most recognisable work thanks to its inclusion on the career-boosting 'O Brother Where Art Thou' soundtrack - despite mentioning their involvement in the Coen Brothers film to thunderous applause.

With each member getting their chance to shine ranging from Joe Thompson's rumbling bass voice tearing through "These Bones" to Levert's crowd-aided descent from the stage to stir up some fervour, the group were joined by Old Crow Medicine Show's Willie Watson for a version of "Children, Go Where I Send Thee" before finishing a set that proved that the current incarnation of the Fairfield Four has what it takes to ensure the group extends to beyond its centenary in 2021.

After the interval, the McCrary Sisters (comprising of Ann, Deborah, Regina and Alfreda in age order) and their ever-reliant four piece band continued where the Fairfield Four had left off with a high octane version of "Come On" from their 2013 'All The Way' release before taking the audience on a whirlwind tour of gospel standards, spirituals and new songs that showcased the innate sense of harmony and musical intuition that perhaps comes most naturally to sibling groups. Whilst Ann was the obvious leader on the night, she was keen to let her sisters take the spotlight which resulted in some truly affecting moments including the group's self-confessed baby Freda pulling off a breathtaking vocal on her own, "He Cares", before Ann herself showed why she has been backing vocalist of choice for countless artists (famously including Elvis Presley) with a sensational rendition of her self-penned "Train".

Most moving was the Deborah-penned "Hello Jesus" which was written during her recovery from a devastating double stroke and, thanks to an impassioned performance of the song by Ann, showcased not only the love between the sisters but also their gratitude to God for his part in Deborah's healing. Nashville country singer Doug Seegers took Buddy Miller's part on a rendition of "Hold The Wind" from the foursome's new album 'Let's Go' and UK singer Yola Carter fitted right in on "That's Enough". However, the night belonged to Regina McCrary who, through an array of powerhouse vocal performances and sheer energy, wooed the crowd and even pulled off a frantic tambourine solo during Deborah's song of surrender "Let It Go".

After an instantaneous standing ovation, the McCrarys and their band came back on stage to perform the infectiously upbeat "Bible Study" before the Fairfield Four and the three guest artists returned for a crowd-pleasing sing-a-long of the veteran group's "Rock My Soul" to close an incredible evening of stellar vocal quartet gospel that succeeded in living up to its title by rocking the soul as well as the very foundations of Perth Concert Hall.

A great gig!! Totally agree with what you said Lins. My favourite comment from the night was at the end from a punter on the way out..."that's the first time I've been to church in a long time!"