The Gentlemen: The pop rockers pushing hard for a mainstream hit

Mike Rimmer has had several meetings with THE GENTLEMEN. Here's what he saw and heard. Photos by Ben Goulter. 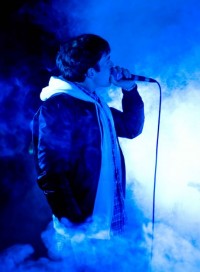 The band are in the Cross Rhythms studios and all set up to play live on Rimmerama. They are in buoyant form and excited about their new album. I have to confess that I wasn't so sure about their debut album but their second has really grabbed me and I was excited to have them on my live show.

Their new single "Push Back" is playing and I compliment drummer Joel Cana about the quality of his drum fills because I often feel that drummers in bands are overlooked. "It's because they're sat down," quips lead singer Nicholas. Sat down but on a drum riser making them even more visible than the rest of the band!

The band are excited because Terry Wogan played their debut single to his massive Radio 2 audience but at the time of writing, they still haven't managed to be added to the station's playlist. A breakthrough seems tantalisingly close. Wogan jokes that Nicholas sounded like he had a Thames estuary accent which is something that outrages the singer since he was born and bred a Yorkshireman and is proud of it. Mind you, he shouldn't be complaining since in the words of Oscar Wilde, there is only one thing worse than being talked about and that is not being talked about!

I presume the band or their management paid a record plugger a suitable amount of money to garner the airplay however Nicholas denies all. "I couldn't possibly discuss that," he stonewalls, before improvising or perhaps lying, "No, no, no, it never happened. It's just Terry Wogan was on our Myspace and said, 'Top of the morning to you, this is amazing, I've got to play this'." You have to admit that the idea of Terry Wogan spending time touring Myspace looking for music to play on his show is a lovely image, isn't it?

It is often difficult to get The Gentlemen to be serious about very much and the conversation often slides into silliness. It's even more difficult to get the band to talk at all about any spiritual objectives they may have. They are Christians, content to be a gigging and recording band without any hidden spiritual agendas and simply choose to let their lives do any talking. 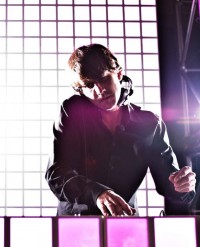 So it's a new era in terms of this album being the one that really gets out there. I remember listening to an early version of the album at the record label and thinking they've really hit it and increased the impact of their overall sound. Is that something in approaching the album that they were thinking, 'Okay, we've got to sound different to the first album.' Guitarist Sean jumps in, "Yeah definitely, the guitar and drum sounds are two of the most crucial things to get the tone right. We definitely just wanted to go for a more indie sound. I don't like to say indie but more of an organic sound. The first album was a lot more pop production so we thought we'd try something different."

The Gentlemen took a different approach to recording as well, this time locking themselves away in a boarding school to make the album. "In Denby, Wales," says bass player Josh. "It's called Live Wire, a good studio." There were plenty of kids mulling around and, as Nicholas points out, some of them even made it onto the album. "In the song 'Push Back'. We recorded them at lunch time. If you listen carefully you can here loads of kids rattling their plates and yelling."

For the album title, the band have become pretty pedantic since it's a 'Candid History Of Faith, Hope, Love' and definitely not "faith, hope AND love". Why is that difference important? Nicholas points out, "It's important that you don't put the 'and' in there Mike because it's one of those things where if you take a word out it makes you notice it again. It's like a picture, or putting a picture in a different part of the house."

I suggest it would be like drawing a moustache on the Mona Lisa? "Well, that would be sacrilege wouldn't it?" he counters. Hmmm. . . I reflect, a bit like changing Scripture? He responds, "Not really changing it, just altering it. I bet if you read the Greek there isn't an 'and' in there. The album title is there because the album is talking about everything within us, our life experience, our faith, our hopes, our love, it's everything. Candid because we're just telling the truth, we're not messing around."

The band definitely aren't messing around, instead they're trying to get some exposure for the new album. Their first singles "Sending Cards" and "Something You Can't Regret" haven't made the breakthrough that perhaps was hoped for. For the third single, the band have pulled the catchiest track off their album and remixed it for single release. I've been playing "Push Back" on the radio since the day I got hold of the album and I hope that this time, with the remix's addition of an analogue synth line and the removal of the crazed hippy bit of spoken word, national BBC will finally truly discover this great Sheffield band. 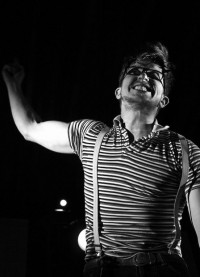 In Diwan's balti house in Birmingham, I buy the guys a curry before their gig at the Barfly. We're all gathered around and I am trying to get to the bottom of what the band is about amidst the laughter and banter. The band are sometimes reticent to talk deeply about the balance of faith and their music. So what about spiritually because it looks as though rather than being a Christian band they just happen to be a band that are Christians. Would that be the best way to describe what they are? Nicholas responds, "If that's what you think we are then that's the best way of seeing it. Different people look at it in different ways. We're all strong in our own personal faiths and we all definitely believe that what we're doing is an expression of that but we're definitely not aiming for the Christian market and we definitely want to appeal to all demographics really because that's what we're all about."

So is there a danger that they have to play down their Christianity because there's a danger that in order to be in the mainstream, they can't admit that they are Christians? "Yeah, that is a danger," Sean responds, "And it's something that we're up against all the time but that's just part of being in the mainstream music scene. Bands who aren't sensitive to that just don't make it into the mainstream music scene because they'll just shut the door right in your face." Nicholas jumps in, "Also, I think there's lots of people who have this slightly misguided notion that the purpose of Christians in the mainstream music industry is to get a high profile then at Glastonbury stop in a set and give a five minute gospel presentation and Glastonbury will turn to Jesus. That's never going to happen and it's not what we're trying to do. We're trying to make music that expresses who we are but also trying to follow Jesus in our own personal lives, and we think that's our calling to be Christians and not an evangelistic team as a band."

As we wait for our curries to arrive, I explain that at Cross Rhythms we get bands asking us not to review their music on the website because if it's on our website people will know that they are Christians. "Yeah, I don't think we'd ever go that far," says Sean, "to say please don't review our CD because it's not something we want to hide but it is something we have to be very delicate about. I think it's a bit naive but I can understand it, it's a very tricky line to tread, isn't it?"

So how does the band's management feel about their faith because obviously when the band were signed they knew The Gentlemen were Christians, so what have they got to say about it? "They're happy," Nicholas says. "We've had a great time working together and that's part of what we love doing, we love working with the mainstream guys from everyone, the management, the sound guy and the venue managers. They matter to us just as much as our relationships with the audience. It's about our relationships with those guys. If anything it's more important with those guys 'cause you actually have more time to sit down and have a conversation with them."