Noel Richards, Wayne Drain and Brian Houston have formed a group for an album and a tour. Tony Cummings had a memorable encounter with THE HUDSON TAYLORS. 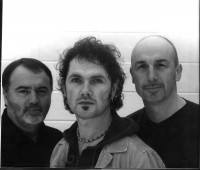 The Northgate Church in Chester is packed, the crowd is enjoying every moment of the Hudson Taylors concert and explosions of laughter are regularly interjecting the country-tinged folk rock songs deftly performed by the three musos standing on the front platform. Laughter, unless it stems from Toronto, isn't a sound usually associated with praise and worship concerts. But then a Hudson Taylors gig is clearly an event transcending the norm of church-based musical evenings. Part roots music concert where keening country chords and bluesy guitar licks meet with Celtic, pop and rock influences; part worship celebration where the lyrics of each song point to the Lover of our souls and are boldly displayed on two large screens; part intimate entertainment where quips, stories, reminiscences and jokes are shared and warm bonhomie rests like a soft blanket over performer and audience. The Hudson Taylors - Welsh-born, English-raised Noel Richards; American, part-Cherokee Wayne Drain; and Ulsterman Brian Houston -will no doubt be toted by the publicists as Christendom's answer to the Travelling Wilburys. Certainly it isn't every day that three singer/songwriters, each of them well established in the album/touring axis of international Christian music, should join forces for an album and a tour. Earlier in the day, before hunger drives us out to the Chester streets in search of a meal, my wife and I sit with the three veteran band members in a cluttered back room, recording an interview. I begin by asking Wayne how the Hudson Taylors came into being.

"We've known each other for many years," explains the Houston-based pastor and worship songwriter. "We were doing a leaders conference in Lowestoft and we needed a guitar player, we'd lost the original one we had for some reason. We were calling around, trying to find a guitar player and we thought we'd call Brian to see if he was available. And I'll let him take it from there."

Brian, all rock 'n' roll style, and with a twinkle in his eye, continues, "The phone rang. And a host of angels came into the room saying, 'Go and join them in Lowestoft...and take a jumper.'" The room erupts again with laughter. Clearly, this is not going to be an easy interview. Brian continues, "Basically I came over to England, played the gig and we did two or three songs together. We just busked it - it sounded okay. The next night we did a lengthier set down with Pioneer People in London and it went really well. There was a guy there called Bill Leckie who invited us to go to his church in Texas as he was doing a conference and he said, 'I'd like to have you three guys over, I like what you're doing.' You know what these things are like, you get asked to do something and you go, 'Yeah, yeah, sure we will,' but you never think it's actually going to happen. Low and behold he booked us to go over. It turned out that Noel and I were going to be in Vancouver about 10 days after that so Noel made the suggestion could we fill up the days in between the conference in Dallas and the conference in Vancouver. So we ended up touring Texas and Arkansas and staying in Wayne's house. Our name then was Bill but it didn't seem to work! We called ourselves The Three Myegos for a while - that was just a joke too! Those gigs went really well. In between where we'd been asked to do that and when we did the tour Noel suggested maybe we should do a record. Then we stared to talk about that. Next thing Kingsway said they'd be interested in doing that with the three of us. As we toured we started talking about songs and selecting lists and low and behold it all came together."

We begin to talk about the name. Noel Richards, looking lithe and smart and years younger now that he's rid himself of ponytail, comments, "We couldn't decide whether it should be Richards, Houston & Drain, or Houston, Drain & Richards, or Drain, Richards & Houston." Brian interjects, "I thought it should be Houston, Houston & Houston but nobody was going for that one either." I ask Brian whether, after his popular 1999 solo album 'In The Words Of Dr Luke', he felt he had a monopoly on the name of a 19th century Chinese missionary? "It's just that I had the idea first and we just used it." Noel explains further, "It was a collective name, like Hudson, a location in North America, and tailors being a group of people working together." Brian adds, "My original idea was a play on words, there was the Hudson River and tailors as in making clothes and I changed ittot-a-y-l-o-r-s and just did it that way, and the guys liked the name so... It seemed to fit the project and had a kind of Travelling Wilburys thing."

Had Brian ever read the famous biography of Hudson Taylor, I wonder? "I read about a third of it before I lost it." Noel has more to say. "He was an amazing guy. Left home at 21 years of age." Comments Brian, "I like the way he halved his income each time, progressively making himself poorer and poorer 'til he got to a point where he could go to China and live that way." Wayne quips, "Are you thinking of mimicking it on this tour?"

We return to the history of the band. Explains Noel, "When I talked to Stephen Docherty back in March last year, coincidentally he was coming to see me the day after we'd done this Sunday evening together. Amanda Collins, who works with Delirious? and is a very good friend of ours -helped us put on Wembley Stadium - Amanda just felt there was something, some real spiritual dynamic that was unlocked in the three of us... The guys jokingly said, 'When's the album?' So I said, 'Well actually Stephen Docherty is coming to see me to chat through some ideas.' So I talked with Stephen and said, 'I like this idea of three separate guys working together and producing something collectively.' We weren't talking about a solo album, I just liked this idea of three very diverse people from very diverse cultures and experiences coming together and actually doing something together, not doing an album where we just do our own songs, like three people for the price of one. I wanted it to have a gelling together and I feel happily that is what has happened with this album."

Did they, I wonder, have a common musical root? Answers Wayne, "I think Brian would probably be closer with country, gospel, Southern rock-type stuff." Noel says, "I'm having a musical education as I'm working with these guys. I'm gradually becoming a good ol' boy and am actually having a lot of fun doing this. These guys launch into stuff sometimes when we're sound checking and I'm standing there, I don't have a clue what they're doing! I grew up in the situation where you didn't listen to music 'cause that was of the Devil. My musical education began when I was about 19, so for me it's been a very strange kind of thing. Some people say, 'Who's your favorite artist, who's influenced you?' I do listen to quite a range of stuff but these guys were weaned on it."

Noel explains how Brian urged him to listen to The Wrecking Ball' by Emmylou Harris. "Everybody goes, 'Oh yeah!' So I went out and bought a copy and put it on while I was having dinner that night with Trish and Amanda Collins and we just sat there and looked at each other and, like, 'Really?' It didn't work for me and I gave it away to Caroline Bonnett. When we got to Nashville the first question Brian asked me was did I like The Wrecking Ball'? and I had to say, 'Well actually, I didn't.' I think Brian must have thought, 'What are we going to do?' Brian butts in, "That was the morning we were actually going to record...! It was that morning that Noel picked to announce that as a child he'd never listened to music and that he didn't like The Wrecking Ball' album and Derry, the producer, had already received demos from us and had started to work tracks based on The Wrecking Ball' as a sketchpad, as a starting point, and was huge into Emmylou Harris and Daniel Lanois so I was like, 'What are we going to do now?'" Wayne adds, "But Noel said, 'The fact that I don't like it doesn't mean we won't do it. Let's go and do it.' When we went over to the studio and heard what Derry had done I think we all were knocked out."

Noel continues the story, "I said, 'I think this is fantastic!' and he said, 'Well, this is just like "The Wrecking Ball".' I said, 'Oh, okay.' I was really happy with what Derry had done. Actually, I just love what we've been able to achieve, what Derry has done with his musicians in taking our songs and transforming them. There's a song called 'All My Love' I wrote in B flat because that was the key I thought worked for the song. I actually wrote it in the key of C and it was really high and I thought it helps the congregation because they really go for it. So I went into the studio and put the whole track down. All the time I was putting the track down in the key of B flat, Brian and Wayne were talking outside the studio saying, 'He's got to change it to the key of G and take it right down low.' So I came out of the studio and they said, 'We think you should do it in the key of G.' I said, 'No, it doesn't work in G.' In the end I said, 'Okay, I'll put a version down in G, but it's not going to work.' When I actually came to putting the vocals down I was able to put so much more emotion into that key because it was lower down, which was exactly what Brian had said. So I think it's this whole thing of learning from one another. They were right. When I'd sung it for the sixth time in the studio, I said to Derry, 'I'm glad we did it in G because my voice would be shot by now. And actually what we didn't want to do was do something that was exactly the same as what I'd put on a live album from Canada. We wanted something that was the Hudson Taylors' sound which was this something different that we were going for. So I'm really delighted with what we have."

could you let me know all the dates and places of the February tour as I am unable to attend the concert at Southport.
thanks
God bless