The Kingston Festival: The festival held in Dorset, '98

The ninth Kingston Festival, held in the heart of Dorset woodland was not without its problems. Torrential rain turned the site into a quagmire causing the Sunday programme to be abandoned. There was also a substantial financial loss for the organisers. Yet God's presence was evident with loads of new Christians and hundreds being given plenty to think about. Here is what Kingston offered this year:-

The big, big top housed many concerts, seminars, communion and the late night 'unchained cabarets'. Various marquees housing various age children's venues, marquees for the exhibition/resource areas housing numerous Christian organisations showing what they do and why. The Kingston shop selling all the usual shop stuff including participating artists' merchandise.

The Sound Of The Underground - mainly for children also attracted many adults for the fire breathing, puppetting, juggling and a guillotine! All with a spiritual purpose of course! A mobile stage labelled Springboard played host to many new bands and some not so new.

The main youth marquee XS (abundant life) was bigger than ever this year and all youth related - artists like Beehive, As If..., Why?, DNA Algorithm, Rodd & Marco as well as speakers like Dawn Reynolds and Andy Hickford.

The XS venue also presented Obsessive Behaviour - the DJ sessions with some of the country's top Christian DJs. As well as them, Grace, the alternative worship group from London finished off each evening with alternative worship and meditation into the early hours. 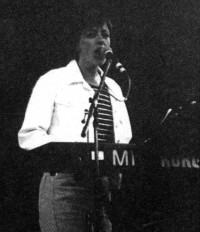 The impressive main stage focussed on the 'bigger' bands and the main preach/worship sessions. Trish Morgan and band and Northern Ireland's Michael Cameron and band led most of the worship. Mike Pilavachi of Soul Survivor spoke, as did Andy Hickford from Worthing and Liam Goligher's drive from Scotland was worth every mile.

A further seminar venue The Alternative held many informative and uplifting times through which many folk were helped. The overall programme lifted Jesus high and it is not easy to mention all those taking part but here are a few:-

Split Level and Bush Baby played some gritty rock; Louis Alexander talked about the relevance of the millennium; Johnny Markin (apart from singing) talked about being in a band; Geoff Chapman spoke about evolution and the Bible. Jim Partridge and Wendy Beech of Spring Harvest did their stuff about Youth Leader training and David Post, Steve Brady and Paul Loader also did a lot of relevant talking! Cliff Keep of Walk Thru The Bible delivered memorable seminars.

Chris Eaton and band brought a great concert, ably supported by Blueberry (who often support another Littlehampton band - Delirious?). The Wades caused a stir, as did Third Day Rising from Wales. The beautiful voice of Carolyn Stilwell of Loose Goose touched many while the energetic rap/dance all boy group Rev Gen (revelation generation) got the throng dancing. The irrepressible band Target were back and the lovely singing of Nancy Sawyer moved the crowd. Skellig, the Celtic rock band, now an integral part of Kingston, played a great set while TC Peach intrigued us with electric music; Martin J Nicholls was an all rounder while local worship band Race, and Fruit, another worship group from Chichester, did well.

Alias were back too, with their unique sound, The Strait offered comedy with a purpose, Steve Legg was still out-timing the escapes by Houdini, If Only did an energetic set and Careless won the crowd with their indie/pop.

Andy Hurst turned up with his famous racoon and Adam Watson with his famous guitar strap. 12 Feet brought 'in yer face' gospel and Mark Skinner and friends' music style was well worth all the travelling. Even the Filthy Peasants turned up!

To all the artists and speakers who uncomplaining fitted into re-scheduled programmes and to all the visitors who didn't cause us any big problems, my grateful thanks! May God bless you all especially those who found new life while at this year's event. Plans are already underway for next year, our special 10th birthday.