The Many: The Chicago-based collective with the "Find Our Way To Love" radio hit 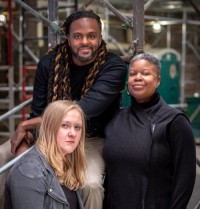 The worship collective from Chicago, The Many, describe themselves as "the house band of The Plural Guild", which is a diverse arts community who are "trying to do justice, love mercy, walk humbly and follow the God who so loves the world". The fact that their song "Find Our Way To Love" has made it to the Cross Rhythms playlist is no mean feat considering the vast avalanche of modern worship material currently bombarding the world Church. I spoke to some of these radical worshippers to glean their story.

The founding father of The Many, in more ways than one, is singer, songwriter, author and academic Gary Rand. Gary's background was distinctly musical. He reminisced, "My parents were country and western singers. Not very famous but they had a radio program in Boston, Massachusetts. They did drive time radio in the days of live radio so they told jokes and sang songs. They had a big audience in Boston. When I was born they just brought me along and I stayed in the studio with them and I sang as soon as I could; by the age of two I was singing along with them. This drive time show was country music so they did a lot of gospel songs and gospel is part of country music. They did that for a long time. The only way I could get out of the group was to go away to college. By that time I was a little tired of dressing up like a cowboy."

By the early '70s, Gary found himself in a band, one of the hundreds emerging from America's Jesus movement, and joined Crimson Bridge. In 1972 the band had a self-titled album, released on Word's newly formed Myrrh Records, which showed them to be a highly credible Blood, Sweat & Tears-styled team featuring horn-driven songs with one entire side of the album given over to an ambitious "Suite In Three Parts", composed by Rand.

When Crimson Bridge broke up, the highly talented Rand entered academia. Gary gained a doctorate in music and went on to teach music at several colleges and universities. He said, "The last 20 years I've been music director and worship leader at McCormick Seminary in Chicago. We've done a lot of things but all along the way I've still been playing the guitar and writing songs (Gary recorded solo albums such as 1981's 'Break That Ground' and 1983's 'Caught By Surprise'). I've done a lot of church leadership. Hannah came along; she just finished college a couple of years ago with a song writing degree. We were talking about the music needed in the church, about songs that weren't being written, songs that didn't express how we felt or the experiences we were having or even be honest about the realities of life in our world. So we began to write songs about those kinds of things and The Many developed out of that. We had all these songs and we said it would be great to get them out to the church and see if they would enjoy singing them or if it would be meaningful to them. So we thought we needed a band and we put together a band in some way to reflect our concerns to be inclusive, multi-racial. A lot of traditions are represented in the music we sing. It has been a great experience for us working with Darren and Leslie. The opportunity to work on all this music together has been enriching and we're all learning in the process."

The Many's 'All Belong Here' album was released in July 2017. A Cross Rhythms reviewer wrote, "To keep things varied and reflecting the band's name, a number of different vocalists with their own unique style deliver each song with skill, passion and genuineness with the smooth tones of Darren Calhoun adorning the soulful Easter song 'Love Rises' whilst Leslie Michele adds a hint of gospel to the likes of 'Forsaken'. Elsewhere, the indie pop vocals of chief songwriter Hannah Rand and a blues-tinged performance from now former member Kerry Anne Pritchard add further diversity to an album that is the perfect alternative to the big label modern worship conveyor belt that currently runs through the market."

As well as songwriting, Hannah Rand plays keyboards at most of The Many's gigs. Speaking about her songwriting, Hannah said, "I grew up writing pop music then when The Many came around I was realising that it was important to embrace a different bunch of genres. Growing up in the church where my Dad was, he found it very important to sing not just contemporary Christian music but songs from Africa, songs in Spanish, songs that were hymns, that were gospel music. I realised that for The Many it was important to blend genres and make it acceptable, at least in some ways, to a bunch of different people who grew up in a bunch of different backgrounds. We've tried to incorporate that and we've tried to co-write songs with great gospel artists so that we can really honour them and honour that background and all the other genres."

Although not performing with The Many, Gary's wife Lenora has written a number of lyrics for the group. It was she who wrote the words for the Cross Rhythms radio hit "Find Our Way To Love". She spoke about the song, "It was written soon after the terrorist attacks in Paris but it was really written in response to so much violence that's going on in our world, and the insanity of our world where hatred and violence seem to be everywhere and seem to be winning. It feels really hard sometimes to know how to pray and what to do. The song was written both as a lament and as a search for a different way. Maybe there are no easy answers, but the feeling was inspired by that passage in Romans where it says weep with those who weep. I think there was an understanding that if we weep with those who weep, if we see ourselves as 'us', we're all 'us' not 'them' then it really does change things. It really helps us get to love. I was also inspired by that Martin Luther King Jr quote from a letter that he wrote from the Birmingham gaol. He said, 'We are caught in an inescapable network of mutuality, tied in a single garment of destiny. Whatever affects one directly, affects all indirectly.' I tried to bring some of that sensibility into the lyrics of the song."

It seems Brits have particularly taken to "Find Our Way To Love". Explained Gary, "We've had a relationship with an organisation in the UK called Proost, I don't know if you know them, Johnny Baker and some other people. A couple of years ago they heard that song and started talking to us about being part of the Proost collective. It's been a good song for us. A lot of people in the US too have been singing and playing it."

The song, though, which has most strongly connected with American congregations/audiences is "All Belong Here". Explained Hannah, "It's a song we wrote about communion but it's really a message of belonging; not only that people are welcome but they actually belong in a lot of places where a lot of the time they don't feel like they do belong. So that's one song that a lot of people have told us they've been singing in church." Gary added, "One day we received a Facebook message from a church in Paris, Tennessee and they said they were singing 'All Belong Here' that morning. Then, the same afternoon, we received an email from a friend of ours in Paris, France saying they had sung 'All Belong Here' that morning."

The three singers/musicians who go out most regularly to minister as The Many are Hannah Rand, Darren Calhoun and Leslie Michele. I asked Hannah what has been the most memorable experience so far for The Many. She remembered, "I think it was when we sort of became a group at The Wild Goose Festival. I say that because that was the first festival we played at as a group that put us in a position where we realised people really wanted to hear us and hear the songs. We played there three years in a row and after the third year a lot of people knew us and knew our songs and really wanted to hear us again. I sort of realised at that point that these songs were more than just for us; they were for a wider audience. And so that Wild Goose Festival was really powerful to join us together as a group and help us figure out that this was something that we could do, that would have a wide impact."

Recently things have been very busy for The Many. Gary explained, "We've just been on a great spring tour; we've been working real hard, every week we've been out of Chicago this last month. All along the way we've been playing new music to see how our audiences react to it. So when we get home in the middle of next month, we're going to start recording. August, September and maybe some of October we'll be recording a new album."

For more on The Many visit the The Many artist profile