The 4th March in Yeovil, Somerset saw a new groundbreaking festival launched which in one memorable day showcased over 30 UK Christian acts. Tony Cummings was there.

A million miles from the big buck mechanisms of Nashville and some distance from the racks of worship CDs in the UK's Christian bookshops a British Christian music underground flourishes. With little or no financial help, hundreds of acts of every conceivable style have emerged out of Britain's churches to play whatever gigs they can find and make "independent" recordings to sell at those concerts. It was a new event with a heart and vision to encourage and nurture this underground which took me down to Yeovil in Somerset. The Nth Fest is the beloved baby of two visionary grassroots organisations, the Nth Degree - a community of Christian musicians working together mainly in the South West - and Risen Records - a Somerset-based record label who despite all the odds and minimal distribution beyond the artists themselves have clocked up three excellent CD releases.

Having the day before inspected the beautifully set out facilities of The Gateway, which each Sunday houses the Yeovil Community Church, and heard the fearsome power of the PA as Bosh sound-checked, I'd already grasped that Nth Fest weren't skimping on the facilities. In fact, when I stepped into the carpeted main hall, the vibrant rock sound that greeted me was everything that rock should be - the thudding kick drum, a bass loud enough to rattle the rib cage and guitars snarling with explosive power. Clearly sponsors ESP Production had done a great job with the sound. The kick off band at Main Stage were Electralyte, still theoretically an independent act though in April ICC will be releasing their debut full length album. They were exceptionally good with an extraordinary multi-textured sound for a three-piece and memorable, anthemic praise-orientated songs which showed why their fanbase is growing daily. After an Electralyte interview, I caught the last bit of Escapade's set. Escapade are a Devon-based band whose EPs have picked up a bit of radio play in the past. They were okay, if not particularly memorable. My ears needed a rest and my stomach a sandwich so leaving the Main Stage area I made my first jaunt to the second stage-cum-cafÃ©, housed in a rather cold, rather echoey gym. The Repercussion were clearly young and the young lass peering over her Casio keyboard seemed stiff and nervous. The songs rambled a bit too, almost resembling retro-prog rock at times though the young lead guitarist could clearly play a bit. Next up at the CafÃ© Stage was one Mary Santo, a slip of a thing with a nice line in jazz singing. Her brief set of standards aided by a pretty hot jazz keyboard player was enthusiastically received though Mary's set did smack slightly of cruise ship entertainment.

I managed to get back to Main Stage to catch the close of The Plymouths' set. They were excellent. Tight, fresh, alt rock rhythms, a charismatic lead singer who throws himself around the stage and songs which show just why they've got a growing reputation in mainstream clubland. It was good to see an established mainstream act like The Plymouths (who incidentally hail not from Plymouth but from Bournemouth) in amongst all these ministry-orientated bands. Next on Main Stage were Glo whose material from their excellent 'Evilution' album was as hard-hitting as ever. Here was a band with a lot to say and the tight, abrasive style to put it over. At the CafÃ© Stage The Overtons offered engaging Tom Overton originals and mellow acoustic strums. After them came the magnificently named Nancy Pong, two Southern lasses with a nice line in wistful pop harmony. Back at Main Stage Last Man Out, who amazingly had journeyed all the way down from Scotland, impressed me, and blessed the throng, with their passionate gutsy worship. I'd missed The Asher Band at Greenbelt so it was good to catch up with them on the CafÃ© Stage. A three-piece with girl singer and girl drummer, their sound mixes in elements of wistful pop and funky rhythm in a hard-to-classify musical cocktail.

At 5.00pm Echolab took the Main Stage. It was a big day for the Poole-based band, this being the launch event for their 'Always In Your Grace' album on Risen Records. Echolab grasped the chance of playing to a 500 plus crowd on a powerhouse PA with enthusiasm. The songs, all from their album, were crowd pleasers and the audience were baying for more at the close. The next band up, Bosh, kept up the energy levels. The brothers, singer Dave and drummer Michael Griffiths have steered the band through 10 years of gigging and recording to a place where they are tight as an ice skater's leotard and as boldly passionate about their faith as anyone on the scene. Their songs, some of which I recognised from their 'VII' CD on Risen, are memorable and the crowd clearly loved them. Exactly the same thing could be said for the next band, Brother John. Their sound is bright and fresh thanks in part to the dazzling electric violin work of Mark Wood. He and the gutsy vocalist and memorable songs of faith keep the audience transfixed. 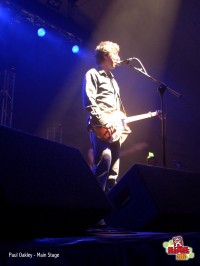 If anyone glancing at the programme and finding the veteran Ishmael as next on Main Stage was expecting a Kids Praise Party they were in for a big surprise. This was Ishmael reliving the glories (quite literally) of his proud punk rock past and with a young band (the girl drummer was outstanding) growled his way through vintage gems from such evergreen delights as 'If You Can't Shout Saved You'll Have To Face The Penalty' and 'Rev Counta And The Speedoze' '70s albums and utterly won over the excited teenage audience. Ish's winning ways made him a hard act to follow but [dweeb] with an extended set brought the Nth Fest its supreme highlight. Anyone who's already witnessed [dweeb]'s madcap onstage antics will know that these Coventry lads are THE most entertaining band on the whole British scene. Their surreal silliness from the first song "Pirate + Copse = Quandary" which had, seemingly, the whole, adoring audience pointing at bass player Matt and chanting "He's a pirate" to the utterly silly tribute to The Cheeky Girls/Spice Girls with singer Timothy Alford reaching for stratospheric notes of dog whistle heights were propelled by the TIGHTEST rhythm section you'll hear anywhere this side of rock heaven. Then, when all the on-stage theatrics and explosions of laughter were at their height, came the spiritual wake up call - a telling and powerful presentation of Christ's death on the cross followed by a call to accept the Saviour. I, like the rest of the crowd, had my eyes closed for that bit, but I later heard that plenty of people prayed the prayer of commitment Tim led them in. After such an explosive set, anything would have seemed anti-climactic but there was still time for some worship. Paul Oakley, with Electralyte providing his backing to play a set of songs, mostly from his 'Antiphony' independent album. And I even managed to shrug off fatigue long enough to catch some of the worship-orientated songs of Unite, another Dorset band, sung to a dwindling crowd in the CafÃ© Stage. But then foregoing the turntable delights of DJ Steach, who had the task of closing the event, I made my way to the car and a welcome bed for the night.

Nth Fest was quite transparently a big success. To get close to 800 people out on a bitingly cold March day to see acts only a few of whom would be known to the audience is no mean feat. To handle the mind-boggling logistics of over 30 acts playing with turn around times of five to 10 minutes is impressive. But, most significant of all is that the Nth Fest is a prophetic declaration to the whole British Church that talent in the grassroots is here in abundance and that concert organisers and fans alike need to look beyond the obvious Delirious?, Redman, Hughes big names to find music that delights God's heart.

ummm,, we went to the one in 2008 and were just woundering when the nezt one will be,, because we are really wanting it go to another !!! we enjoyed our selves so so much last time and cant wait for the next one! please reply !!! =) x x x x x

i actually cant wait until March or the next one. But is it possible to buy tickets over the phone, or from somewhere other than See tickets???? x

Despite the fact that Yeovil seemed a slightly random location for a pretty large-scale music festival, it was really cool to have something happening in the southwest. My day was made my the fact I discovered an excellent punk band, and so I left with a smile on my face and a CD in my hand! More of the same please...! Kat xx

Wow, this event sounds like it was a stomper! I'm really chuffed to see that there are others like myself who have realised that booking Delirious isn't the be-all and end-all of having a 'Christian' music event! Glad to see so many unsung heroes getting the recognition that they are so often denied. 'Mon the underground that's what I say! Blessings - emo x

Stunning event. I've been to many gigs/festivals over the years and having organised several of my own I can say that ESP Productions should be acknowledged for providing an awesome rig and supplying staff with the best attitude I've seen thus far... so helpful it was un-true. Bosh blew me away. I know the keyboard player Grant, but had never heard him playing with Bosh live before... now I can't wait to hear them again. Well done to the Nth Fest organisers, I hope it will be back next year!? DB

Really enjoyed Nth Fest, but the highlight for me was watching BOSH and Echolab playing their new material. Awesome day out! Thanks

Nth Fest was indeed a really top class day! Some of us have said its the best day we've had for ages!! Some top class acts, many un-sung heros that remain un-named - and also a great atmosphere - There were lots of people running around with 'Infusion' t-shirts on, I think they should be congratualted!! They were really hardworking and helpful!!
Lots of love to everyone who reads this!!
Peace!

The whole day was awesome, i bought some Cd's from the day and after listening to them i wasn't disappointed at all. It's a shame about some bands on the Cafe Stage, The Repercussion's sound really let them down, and deserved to be on the main stage in my humble opinion. Their Cd was well good though!
Brother John and Bosh were amazing. But band of the day had to be DWEEB! We love you in Yeovil now, you guys are legends!!
Can't wait for next year.
Love to you all.

I attended Nth Fest specifically to see Ishmael and his new Glorie Band in action. They played an excellent set, resurrecting a number of Ish classics with glorie-ous punk prowess. But I was also surprised to see so many other bands, as I stumbled upon this treasury of bright, sparkling musos. I hope they continue to encourage one another towards greatness. The festival itself was extremely well organised - staff and stewards were cheery, friendly and respectful. It was a refreshing day out. Thanks for the hospitality!