The Revival Festival Of Music: Legacy Five and many more at Scottish festival

"We want to see souls saved and that's what we're here in Perth for," Dawn continues. "We have healing ministry and there are so many people that are hurting. If there's something that we can do or we can say that can touch somebody and help get them through whatever they're going through then that's what it's all about. Whether it's to one person or 10,000 people, we go wherever God calls us to sing." 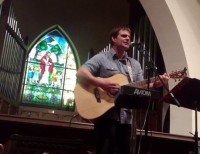 Brought up and based on the small Orkney island of Westray, singer/songwriter Michael Harcus has ploughed his own furrow of country-tinged Christian music for a number of years with eight albums, including his latest release 'Hardship & Hope', under his belt. Together with wife Teenie and pianist Mairi Warren, Michael won the hearts of the Perth audience at every turn thanks to a combination of his Orcadian charm and some genuinely spine-tingling moments of music and ministry. With his homespun musical style adding some welcome variety to the US acts on the bill, I ask Michael how it feels to be just that little different from everyone else.

"I was at a secular event back in Orkney the other week and every single act was different and I enjoyed every minute of it," he explains. "I was reminded that it's all right to be different. We sometimes make the mistake of wanting to be like the more well-known guys we share the stage with but God wants us to be who we are."

Michael makes it clear that the camaraderie between the acts witnessed on stage is very much genuine and evident off stage. "It's a great bunch of folk at this event. One of the good things about weekends like this is that we get the chance to sit down, pray together and share food together - something that Jesus did quite a lot! Maybe that's why here is a good place to be."

Resplendent in cowboy boots, skinny jeans, big guitar and country girl blonde locks, 23 year old Mississippi-based rising star KC Johns mixed songs from her new EP 'Key To My Heart' with her own take on hymns such as "Blessed Assurance" and "Amazing Grace" in what, like the Pathfinders, was her first visit to Scotland.

"I'm just so honoured to be amongst the other artists," KC enthuses. "I knew of them but I had never actually met them even though half of us are from the US. It's been such an honour to work with such incredible musicians at this festival."

KC sums up her ethos: "There's a variety of people here which is cool and my main aim is reach the younger crowd. They're the next generation to come up so I just want to tell them about Christ and share my story and hopefully they'll come to know Jesus. The biggest highlight of this festival for me has been meeting all the fans and spending time with them and getting to know them. Also, getting to know the other artists has been really cool and I would love to come back to the UK again soon." 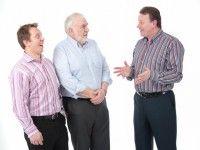 Having disbanded as a quartet in 2005 and reformed as trio in 2010, Northern Irish Southern gospel pioneers Crimson River have seen ever-increasing audiences fall in love with the Belfast humour, sincere Gospel presentation and close knit harmonies of members David Mawhinney, Gordon Halliday and Derek McCreight. I ask the trio what makes Crimson River tick.

"It's very much a ministry for us," confirms Derek. "We all have day jobs so it's a passion for us and it's fantastic to have the opportunity from God to get out there and glorify him and just share the message of the Gospel with people through music."

"Also, we don't live in a bubble world and we have a well-accepted roundness of identifying with people where they're at and the circumstances of life that they're going through - some of which we in the group have gone through ourselves," adds Gordon. "These times of challenge have been a test of our faith and test of the strength of our unit as well. This, we believe, is an important aspect of being able to use our music to touch people in a real way and to challenge them and ourselves as to where they're at with their faith in the Lord Jesus Christ."

"At the end of the day, there's no point singing about something you haven't experienced yourself," David chips in. "We can all point to times in our lives when the Lord has touched us and we are happy to sing about that."

Gordon sums up his hopes for the weekend. "We just want to touch people with the Gospel and touch hearts that are maybe a little bit cold. This is an opportunity for them to hear the voice of God through the various people who are ministering this weekend."

In closing, Gordon states the aim of all involved in the Revival Festival Of Music. "Over everything else, everyone taking part wants the name of the Lord Jesus to be glorified in all we do here in Perth this weekend."