James Attlee met up with one of the giants of contemporary gospel music RICHARD SMALLWOOD. 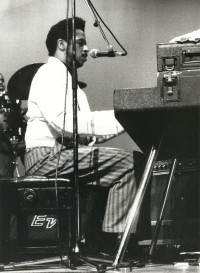 The 80s saw many of black gospel's leading lights in the US seeking to broaden their audiences by moving stylistically more and more into crossover territory.

Every soul or R&B hit scored by a member of the gospel fraternity was further incentive to tone down the lyrics and turn up the beat. Some felt that as that beat got funkier so the 'message' got flakier, until there was little to choose between so-called gospel artists and their soul and pop counterparts. More traditionally-minded performers retreated into a purely church-based ministry. However, there has been another path trodden by a select band of performers of whom The Richard Smallwood Singers are a perfect example: that is, to avail themselves of everything the modern studio has to offer without compromising their lyrics one iota.

Smallwood's background is classic gospel. He describes his initiation into music as "automatic - my father was a minister, and I was singing and playing at four or five years old. Dad was an evangelist, we travelled all over the USA, he founded 20 or 30 different churches. I was born in Philadelphia but I travelled all over until I was about 10, when we moved to Washington D.C.

That travelling bug must have stayed in the blood, because Smallwood's still on the gospel highway in 1990, even if the road takes many different forms today from those it did a few decades ago. When we spoke he was about to leave on a 'gospel cruise' sailing from Key West down to Florida, the third such trip he and his band have undertaken. But Smallwood is far from being some cocktail-lounge Inspirational' crooner. With 'Portrait' he has delivered the finest album of his career to date - a searing slab of contemporary gospel with its roots right back into the rich heritage of the finest of American black music. What were his influences, I wondered?

"Basically artists in the more traditional style: Roberta Martin, James Cleveland, Clara Ward, Mahalia Jackson. I did get a chance to meet many of these artists - my mother used to take me to meet them when they came to our town. Among more contemporary artists Walter and Edwin Hawkins were really inspirational in my style and in my writing."
One of Smallwood's hallmarks is his superb piano work. He started playing at five years old, and grew up idolising Little Lucy Smith, the piano player with the original Roberta Martin Singers. In 1970 a unique occasion took place that gave him the chance to fulfil a dream. "The original Roberta Martin Singers reformed for a concert at the Smithsonian Institute, and I played piano with them. It was like working with living legends."

From The Smithsonian Institute in 1970 to the famous Compass Point Studios in Nassau 20 years later is a long way for anyone to travel, but Smallwood gives the impression of an artist just finding his feet. Had he enjoyed recording his latest album under the Caribbean sun?

"I really did, it was a beautiful experience. The atmosphere was so relaxed, I just took my time. We did the rhythm tracks and the voices at Compass Point, then we went down to Nashville to do the strings. We recorded the horns in D.C., and mixed it all down in Atlanta, Georgia."

One of the most enjoyable things about the album in this age of synthesizers and samplers is its use of real instruments - notably the red-hot horn section on a track like "He's Able."

"I really wanted to do that - it's part of my training. I trained on acoustic piano and I've got a love for acoustic instruments. There's nothing like a real horn section, or real strings or a real drummer!"

The Richard Smallwood Singers formed in 1977, so together they have seen many changes in gospel music. Originally the Singers were 15 strong but they have slimmed down to a more lightweight eight members to facilitate touring. 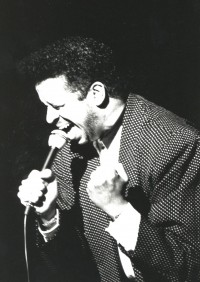 Smallwood maintains that 1990 is a healthy time for black gospel in America. "Gospel has really begun to be accepted in the mainstream market - artists like BeBe and CeCe Winans and Take 6 have really opened doors for a lot of other artists. Record companies are spending more money on projects, the projects are being recorded in a more professional way."

Could this influx of cash lead to a dilution of the essence of gospel?

"I don't think so. Gospel music should be recorded with as much excellence as the top pop act. The more spent on a project, the better it sounds! The spirit of contamination comes in when you let the lyrical content get watered down, or when the music gets so intense that it gets in the way of the message. It's really up to the artists, the composers to not let it be contaminated.

"The problem is a lot of times artists go in and they sign contracts and they don't get the creative control they should have. The company says 'take Jesus out of this line, take God out of that' - the artists need to negotiate control so that the company can't make it into something completely different, so that you don't lose the spirituality out of it."

'Portrait' is Richard Smallwood's third album on Word and is distributed to the mainstream by A&M records.

"The secular label is very important to reach people via the shops and by getting radio play. I'm always looking for ways of reaching more people, by whatever means I can. I pick up some radio-play but not yet to the extent I would like. Certain types of music cross over, and those types of gospel songs contain lyrics that are really a watered down version of the gospel. My only problem with that is I have something I want to say to those who don't know God.

"I have a positive message - Jesus is the way I should go and my life should go. I haven't written so many songs along the lines of 'I love you' which could mean 'I love you baby' or 'I love you Lord.' Because of that they don't crossover quite so easily."

With its call to "go back to the oldtime way," to prayer and to holiness, 'Portrait' is nothing if not uncompromising.

But then that stance has been a trademark of this man who grew up steeped in the traditions of the fieriest practitioners of black gospel since the beginning of his career. As Viv Broughton wrote about the album "The Richard Smallwood Singers" in his book 'Black Gospel - An Illustrated History Of The Gospel Sound'. "This is contemporary gospel that succeeds on all levels - spiritually, artistically, technically and, yes, commercially. For there is a hunger to hear gospel music as it confronts, rather than reflects, popular culture."

Whether its in concert halls or on cruise ships, in downtown D.C. or at Compass Point, I'm sure Smallwood's going to be confronting as well as entertaining his listeners for many years to come.