The Surfaris: Surfing for Souls 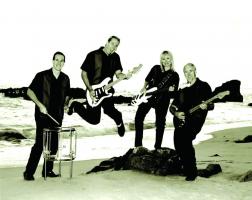 The release in the States this month of the album 'Wipe Out' by the Surfaris will have every devotee of '60s music reaching for their rock music encyclopaedias. For a record released in 1963 by a high school surf band called the Surfaris has become a part of pop music legend. The original Surfaris - Jim Fuller, lead guitar, Bob Berryhill, guitar, Pat Connolly, bass and Ron Wilson on drums - produced one of the most memorable instrumentals of their or any other era, the classic surf anthem "Wipe Out". It was originally recorded to fill the other side of an independently released single, "Surfer Joe", and was cooked up by the band in 15 minutes. "Wipe Out" featured a drum solo which was actually a cadence for Wilson's high school marching band. A simple rudiment called a paradidle formed the main beat.

Remembers Bob Berryhill, now 56, "I suggested some drum breaks, we added some chords, a little melody and in a short time, we had 'Wipe Out' written and recorded. Our manager did the crazy laugh intro and we cracked a plywood board over the microphone to make it sound like a busted surfboard and 'Wipe Out' was in the can. One hundred 45 rpm records were pressed and we got the record to a distributor. He took it to Hollywood and met some people who got it played on the radio. That was January 1963 and by April 1963, it was number one in Los Angeles and number two in the United States. So we had kind of a meteoric rise."

That summer was the Summer Of Surf-the heyday for surf music. Recalls Bob, "We toured the world playing and surfing places like Hawaii and in January 1964, we landed in Australia. This tour included the Beach Boys, Roy Orbison, Paul And Paula and the Joy Boys from Australia. They were also the backup band for Roy Orbison. We kept on playing for the next two or three years until the Vietnam War hit and the Beatles came along and changed the music scene."

The Surfaris abandoned beach and hot-rod themes for folk rock and had a number two hit in Japan with the song "Kareen". They also recorded music for the movie The Lively Set starring James Darren. The career of the Surfaris seemed to have petered out with Ron Wilson dying from a brain aneurysm in May 1989. But the unforgettable "Wipe Out" refused to die. It turned up in films such as Dirty Dancing and The Vanishing while advertisers such as Nissan, Pepsi and Kodak all made use of its pounding, primeval appeal. Admits Bob, "'Wipe Out' has gone on to have a life of its own." Everything was to change for Bob Berryhill in 1971 when fellow Californian musician Chuck Girard from the Castells and the Hondells started a new group called Love Song. Chuck called Bob one weekend and asked him to a concert at the Long Beach Auditorium. Remembers Bob, "I showed up thinking it was going to be some kind of Beach Boys/Hondells concert, but it turned out to be a Jesus concert. So I was there listening to the music by Love Song and they played a song called 'Welcome Back'. The Lord tugged at my heart but at the time I didn't know who or what it was. Then Chuck Smith came out and said, 'Taste and see, the Lord is good.' Something compelled me to get out of my chair and I grabbed my wife's hand and we went forward to accept the Lord that night. It was December of 1971 and since then we've been riding along the crest of the wave with the Lord."

Nearly 15 years ago, Bob reformed the Surfaris with his wife Gene and other surf rock musicians. He still owns the DBA of the name and it has over the past seven years become strictly a family affair. His wife, a concert violinist, plays bass, and their eldest son Deven plays guitar. He is also the director of music at Calvary High School in Costa Mesa, California. Their younger son Joel is the drummer, and vocalist on the new recording of "Surfer Joe". He currently leads worship at the new Calvary Chapel South County in San Juan Capistrano. "For the new album, now with Calvary Chapel Music, we decided to write and record eight new original songs, plus new recordings of 'Wipe Out' and 'Surfer Joe'. The two classics are not that easy to find these days, so we rerecorded them for this CD." The vision for the band is to bring families together. Bob says, "What I've noticed over the years as we have been doing surf music in a Christian ministry vein, is that people really want to hold their families together. Parents are looking for anything they can have in common with their sons and daughters. When we play a concert, the high school, junior high and elementary school kids love the music and the parents say, 'Gee, that's my music. It's simple, straight ahead, and alive. Our kids want to play music and I'd rather have them learn surf music than grunge or hip-hop or some of the other styles.'

"What the beauty of this is, I have my two sons and my wife on stage with me. How many guys have the privilege of having their family play with them on stage? So basically, it's a family ministry. Unfortunately, there are husbands who can't stand to have their wife and their kids in the same room together, let alone play in a band and write songs. God has brought our family together through music, through the Lord and through the power of Christ. His awesome love puts his covering over us and it enables us to stay together as a unit, and that's the centre of our ministry, to be an example of God's love and desire to hold families together. We are still doing concerts and plan to continue as God empowers and leads."

Fuller kills it on Wipeout and Point Panic That guy is hot!
Surf's UP!