The Swanee Quintet: The 72 year old group with the James Brown connection

The Swanee Quintet are gospel music survivors - an old style vocal group who over the decades have travelled the Gospel Highway playing everything from humble storefront churches to Carnegie Hall and Madison Square Garden. They are also a group who were called gospel's "countriest" act by gospel authority Anthony Heilbut (meaning the Swanee's sound was raw and rural rather than veering towards the white sounds of Nashville) yet a group sophisticated enough to record and tour with Soul Brother No 1, James Brown. While hosting a TV special opening the remodelled Apollo Theatre, actor/comedian Bill Cosby said that one of his favourite memories "was watching the Swanee Quintet excite the Apollo audience with their special brand of gospel music."

The origins of the group go back to 1939 when a trio - consisting of Charlie Barnwell, Rufus Washington and William "Pee Wee" Crawford - toured Georgia and South Carolina. Based in Augusta, Georgia, they added two other members, James "Big Red" Anderson and Ruben W Willingham, and by 1945 the group were operating as the Swanee Quintet with Willingham on lead vocals, Crawford dropping his vocal duties to concentrate on playing his unmistakeable guitar and the other members harmonising.

The group's name was as downhome as their music, gospel authority Chris Smith observing, "The Swanee Quintet [was] closer than most people have got to the correct spelling since Stephen Foster altered the Suwannee River to fit his tune."

For several years the Swanees were featured on a daily radio programme in Augusta. Eventually in 1951 the group came to the attention of Nashville entrepreneur Ernie Young who had formed Nashboro Records, a label with a close link to Ernie's Record mart retail, mail order and distribution house. From the outset, Ernie Young had hit upon a reliable niche market for gospel music amongst Southern blacks and with regular exposure on the influential Nashville radio station WLAC he had a ready sales outlet in Ernie's Record Mart. The first 78s released on Nashboro by the Silvertone Jubilee Singers, Zachery's Heavenly Gospelaires and the Skylarks were moderate but as the '50s rolled on regular play on WLAC of Nashboro's growing roster of downhome gospel purveyors like the Consolers, Edna Gallmon Cooke, Professor Harold Boggs and The Swanee Quintet the hits began to come. 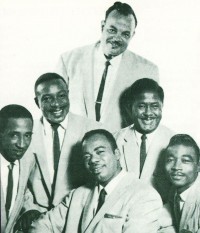 It was the Quintet's 1953 single "Sit Down Servant" they broke big on the gospel market. Wrote Chris Smith, "The song had all the ingredients that were to be typical of their style over the years: Crawford's bluesy guitar riffs, the mighty background chords of Anderson, Barnwell and Washington (these three formed the Swanee's backing vocal team for over 30 years) and above all the fierce preaching and singing of Ruben Willingham, moving with an easy grace from speech to song to something in between."

More successful Swanee Quintet singles like "Cry Sometime" (1954), "It's Hard To Get Along" and "I'm Alright Now" (1955) and "Race To Run" and "Jesus Won't Fail" (1956) followed. Chris Smith described Rev Ruben Willingham as the "testifier par excellence" and certainly his rasping exhortations to keep faith in Christ were as exciting as anything in gospel. If Willingham's singing needed anything to make it perfect, it was a foil, someone to supply contrast. "Big Red" would sing falsettos in the background, but in 1956 the group went to the next level when the Quintet became a sextet when Little Johnny Jones joined. The addition of Jones' sweet high tenor to the group's vocal armoury was a revelation. More singles like "Come See About Me" (1957) and "Sleep On Mother" and "Over In Zion" (1958) and "My Father's Land" (1959) were good but it was their "New Walk" single recorded in August 1959, with its stately but impassioned beginning suddenly transforming into an uptempo, church wrecking romp, that is considered a classic.

Chris Smith wrote about the Quintet, "As the years passed there was little change to the Swanee's sound; they and Nashboro kept up with musical fashion adding various combinations of bass, piano, organ and drums at times, but luckily these were usually well and unobtrusively played and they don't distract, either from the vocalists or from Crawford's guitar work."

Pioneers in gospel like Sister Rosetta Tharpe and the Ward Singers had taken gospel music beyond the confines of the church and in the '50s New York disc jocky and gospel singer Thurman Ruth began to present his Gospel Caravans at the Apollo. Thurman remembered the Swanees as "the greatest singing group that I had at the Apollo. They were terrific. I had them with another big-name group and the big name was closing. But the Swanee Quintet was so tough that I had to let them close the show."

By the '60s the sales of the Swanee Quintet's singles were dipping and though Nashboro released albums like 1960's 'What About Me', 1962's 'The Anniversary Album', 1963's 'Meetin' Tonight' and 1964's 'Soul Stirring Gospel' the golden age for the group seemed to be over. But then "Mister Dynamite", James Brown, took an interest in the Swanee's dwindling career.

Brown had once worked as a shoe shine boy outside the WGAC radio station in Augusta (where the Swanees had their afternoon radio programme). The shoe shine boy grew up listening to the Swanee Quintet and in his teenage years secularised the sound of Ruben Willingham and the Swanees to start James Brown & The Famous Flowers. The R&B star took the Swanee Quintet under his wing and gave them a spot in his touring review and even produced a single, "Try Me Father", with them. As it turned out, even with the James Brown Band behind them the single, on Crescent Records, a gospelisation of Brown's 1958 hit "Try Me", was not a success. Shortly after that session Ruben Willingham left the Quintet to enter the ministry and perform as a solo singer, although on his first recordings in 1969 he used the Swanees as a backing group. Johnny Jones was briefly tempted into an unsuccessful mainstream R&B career, but he too rejoined the Swanees from time to time.

The group brought in replacement lead singers Percy Griffin and Clarence Murray and, though not at the same pace as of old, continued to tour and, occasionally, record. The Swanee Quintet recorded albums like 'Eternal Life' (AIR, 1992), 'Just One Rose Will Do' (AIR, 1995), 'So Glad' (AIR, 1998) and 'The New Walk' (Gospel Jubilee, 2000). In 2002 James "Big Red" Anderson was inducted into the Gospel Hall Of Fame while the following year J R Riles, with the help of fellow Augustans recognised the historical significance of the veteran gospellers by honouring the group by naming a street Swanee Quintet Boulevard.

In 2009, The Swanee Quintet celebrated 70 years of singing gospel music with the release of the CD '70 Years: The Legacy Continues'. The CD was a mixture of old and new material and was described as "serving to introduce the new members of the group." By that time the lineup consisted of long-time members Percy Griffin, Johnnie Mims and Eddie Bynes and new members were listed as Mario Smith, Marciano "M & M" McKie, Charles Green, Colby Weaver and George Drummond (making a total of eight!). Whatever the exact lineup for any gig, 'The Legacy Continues' still showed plenty of old time gospel fire. The long-in-the-tooth gospel practitioners are indeed what they were called on a televised cable TV special, "Living Legends Of Gospel".

Since I started all over again really moves the holy spirit in me it made the Dr.Jesus album fantastic.

I'm from Augusta, thanks for the history of "The Swanee Quintet"
a great group.