Phil Baggaley, Jo Carlier and Rob Bullock spoke about the new concept album 'THE TIME PROJECT'. Tony Cummings was there. 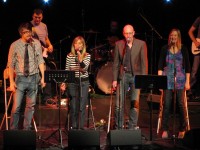 As followers of Britain's Christian music scene will tell you, there's a small enclave of musicians and songwriters - several based in Derby - who, down the years, have been responsible for a string of successful various artists projects. The most successful of these albums, 1997's 'City Of Gold', is now considered a classic of its kind, with music and spoken word fused in a breathtaking audio experience. Now the driving force behind these albums, songwriter/producer (and as nostalgists never tire of reminding him, one half of CCM hitmakers Phil & John) Phil Baggaley has once again called on the services of many of the 'City Of Gold' associates. These - Welsh singer/songwriter and now composer of successful musicals Mal Pope, renowned solo and session singer Julie Costello, and author, raconteur and poet Adrian Plass - together with Derby-based singing talents Jo Carlier and Pete Webb assembled a team for a new album, 'The Time Project'.

The Time Project is a unique collaboration of friends, musicians and artists in support of a children's hospice called Helen & Douglas House. One of the musicians involved in the project, guitarist and harmonica player Rob Bullock, spoke about his connection with the Oxford-based hospice. "We've got some friends who work down there. We got chatting with them and were really interested in what they were doing as a hospice. Basically what they have to do in real terms is raise four million pounds a year to keep the hospice open. We came away from these people and thought it would be really nice to do something, number one to raise awareness about what they were doing at Helen & Douglas House. The only thing we do is music, so we started to think about what kind of subject we could focus on in a musical presentation."

Put simply, the theme of the album is the passing of time and the wisdom in valuing all the days we have given to us. Singer and composer of the song "Where Did The Years Go" Jo Carlier spoke about the theme, "I think it's one of those subjects that almost everyone has got something to say about it: 'Where's the year gone?' 'The day is really dragging'. It's one of those things that we all have in common and we can talk about it with virtually everybody. I think that's the thing with the project, with the album, it's hopefully got something to say to everybody at a number of different levels. 'Where does the time go?'"

One of the most powerful songs on the album is "Italy", sung beautifully by Carlier. It was written by Phil Baggaley. He said, "When I get an idea for a song I write it down on a piece of paper and save it for a year and then find a tune that goes with it. A couple of years ago, my mum and dad had their 50th wedding anniversary and for a treat they took us all on a Mediterranean cruise, which was the first time I'd ever been on a cruise. On one level it was fantastic. It was like, as much food as you wanted, it was very decadent I suppose. It was mad on this boat, there were about four thousand people on board. It was almost like a small village and the theatre was like some West End theatre. On another level, it almost got too much so that you really wanted to get away and get a bit of peace and quiet. At one of the ports the ship stopped at in Sicily my wife Claire and I got a taxi and said, 'Take us to a small village in the mountains.' We wandered round this little town and found a church. It was that whole experience really I suppose." 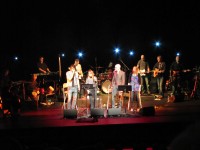 All Baggaley's compositions come from a Christian world view though over the years he's become adept at writing which also connects with a non-church going audience. He said, "In the last few years we've been doing an event called Soul CafÃ© in Derby and that was our attempt at putting something together that was Christian but accessible to people outside of the Church. I think as part of that process you start to think like that with everything that you write, especially with what we've been doing with the band for the last couple of years as well. I'm of the opinion that a lot of people are very spiritually interested in things, and for whatever reason, can't relate to the Church as we know it. The choice is we either don't communicate with these people or we find a way of showing our beliefs. I also think that sometimes, especially with Christian music, you can end up dotting the i's and crossing the t's too much for people, and giving them no room to make of songs what they will. For example if you go to the theatre, people don't have to tell you the ending of the story before you can start to work it out yourself, and so I think that from a writing perspective that's what we try to do, just to make it accessible as far as you can go."

'The Time Project' album was originally set to be released by Authentic Music but with that company's difficulties Phil and his friends took the bold step of releasing it independently. It was launched at a concert featuring all the major participants at Derby Theatre on 21st January and judging from the rapturous reception given the new songs and poetry by a packed-out audience, the album has the potential to raise a considerable amount for the Helen & Douglas House hospice. The co-producer of the album was Rob Bullock. He admitted, "It was a very interesting learning experience. About this time last year I decided I wanted to buy a little bit of recording gear, just to use at home for my own interest and enjoyment. It turned out to be quite good at what I bought it for and through an interesting set of circumstances, we ended up recording most of this album on that, in my house, in our spare bedroom."

As so often happens with home recordings, drum playing caused some difficulties with the neighbours, though not in the usual way. Explained Rob, "The next door neighbour one side plays the drums anyway, so we had to stop some of the recording because he was playing a bit too loud. I mean, it's a detached house so can you imagine how loud he was."

There can be few potential purchasers of 'The Time Project' who will fail to be moved by the underlying story of the album and the amazing work being carried out with terminally ill children at the Oxford-based hospice. Remembered Phil, "There's a lady called Sister Francis, who was one of the founding members of the Helen & Douglas House. She was talking on a DVD saying, for the work that they do there it's not the LENGTH of time that is important but the DEPTH of it. I thought that that was a really good way of putting things into context. For children who go to the hospice, time as we know it is quite limited. We can learn a lot from how much value they place on the short time that they have."

I have the album here in NZ... a very fine recording and great to see Baggers inspiring great songs to be written by a good bunch of musicians.
Good work... well worth supporting.