As Mark Allan Powell wrote 'Can It Be?', released in 1975, bore "little resemblance to its first, but remains exceptional in its own right." Powell continued, "The band added rock and roll to its panoply of styles and came up with a wildly eclectic collection of material that lacks focus but preserved more innovation than had been demonstrated by any other group at the time (this was still a year before Daniel Amos released their debut album and two years before 'Shotgun Angel'). The album opens with 'A Cowboy's Dream', a melodic country/rock song that differs from the country/folk of the debut through employment of broader, electric instrumentation and pedal steel (courtesy of Al Perkins, the album's producer). It is basically in the same musical ballpark as Pure Prairie League minus the twang. 'Days Of Noah' comes closest to the folk stylings of the first album, though again the arrangements are richer, with layered vocal harmonies, fuller instrumentation and extended electric guitar solos. Lyrically, 'Days Of Noah' testifies to the imminent return of Christ with reference to Matthew 24:37. 'I've Been Sealed' is a pure country romp with a hand-clappin', foot-stompin' chorus that declares, 'Ain't no body gonna take my joy away. . . I've been washed in the blood and I know that I'm here to stay'; someone really does go 'Yee ha' halfway through. Likewise, 'Sittin' In The Pew' is a hillbilly jug band indictment of those whose participation in church activities seems to lack any true devotion. Both of the former two songs ('I've Been Sealed', 'Sittin' In The Pew') have elements of the Ozark Mountain Daredevils.

"By contrast, two more songs move toward guitar-dominated art rock. 'Do You Feel The Change?' contains fluid guitars reminiscent of Tommy-era Who with Santana-like percussion and almost choral vocals in service of a song that, unfortunately, does not have the lyrical strength that such an opus deserves ('Jesus is why we can sing/Freedom is what he can bring/New life is what you will live/Heaven is what he can give'). The title track is more successful, a spooky, atmospheric meditation of the mysteries of the universe that contains subtle sonic allusions to artists like Pink Floyd or Emerson, Lake And Palmer. The real surprise of 'Can It Be?', however, is 'Living On The Bottle', an almost blistering rock track with raw lyrics about debauchery, appealing to those whose lives need a 'change in style' and whose souls need to be 'saved from hell'. The album also contains a unique, down-tempo ballad called 'Bearded Young Man'. With strings arranged by David Diggs, the latter song develops with unpredictable textures and, again, atmospheric effects. Lyrically, it presents the historical figure of Jesus as a first century hippie in a manner similar to Larry Norman's 'The Outlaw'." 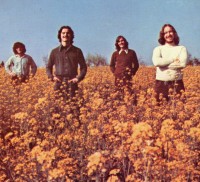 With the release of 'Can It Be?', The Way were a well-oiled, professional touring entity with their own custom van and a trailer. Reminisced Dana, "By now, we had five musicians, one sound man, two wives, one baby and a booking agency that was keeping us plenty busy. The toll of constant travelling was starting to wear on us. We quite often had heated discussions about silly things. Alex decided that he had had enough touring and asked to step out of the band. It was sad, but we all understood. He had a great sense of humour and was very stable in his emotions. His loss was more than just musical. We replaced Alex with a highly technical drummer from Laguna Beach named Michael Fickling. Mike had been schooled on the Buddy Rich style of drumming. That just means that he's good, very good. Along with Michael came his wife and we now added one more to the van.

"Michael was famous for his 20 minute drum solos that were highly technical and dynamic. Once we were playing at a high school mid-day assembly up in tri-cities, Washington State. We were used to blank faces and smirks from high school students, and most high schoolers are extremely critical. In the middle of our set Michael would stop and perform a drum solo. These high schoolers' jaws dropped to the floor when they saw him play his solo, and they ended up giving him a standing ovation. His talents were very useful in getting people's attention."

But life on the road was taking a serious toll on The Way. Recounted Dana, "After another year of touring Bruce decided that he had had enough, too. With a new baby it was hard travelling all of the time. We had several tours booked and we now needed a replacement for Bruce. We were introduced to a Christian artist named Jim Stipech. He agreed to fill in and he quickly learned Bruce's lead vocal parts as well as learning Bruce's guitar parts. He went with us on several tours and filled in quite nicely, but I always felt the void that Bruce left."

In 1977 The Way finally broke up. John Wickham spoke about the band's wrap-up, "Some people got married and had these things called children and it was harder financially and God just had other things for us. We didn't take it lightly what we were doing, we took it very seriously. We thought it was something God wanted us to do so we really prayed about it when we disbanded but it was definitely time."

When the end came The Way's members took off in different directions. Dana kept his musical hand in with a funk band Horizon and re-emerged in 2011 with the solo album 'One Of Them'; Alex MacDougall played with Daniel Amos and the Richie Furay Band; Gary Arthur and John Wickham became members of Parable and were on the group's second Maranatha! Music album, 1977's 'Illustrations'; and Bruce Herring contributed his smooth vocal tones to the anonymous studio ensemble The Maranatha! Singers whose 'Praise' series of albums were to become huge selling projects for Maranatha! Music.

Looking back on the six years of The Way's existence Dana wrote, "In those six years, we did 12 years of living. We completely wore out two vans. We travelled so many miles that we lost count after one hundred thousand. We ate the best food and the worst food. We got thrown out of a truck stop diner in Tennessee because of our looks. We got chased out of a gas station in Arkansas by an owner with a shotgun, in the middle of the night, when we were out of gas because he didn't like our looks. We slid across many, many bridges, covered with black ice, fish tailing and praying we wouldn't go sideways. We had the pastor of a church apologize to his congregation for the way we looked, after we had just finish playing, while the Holy Spirit was moving on people's hearts, and he should have been giving an alter call. One time we were playing at a beach concert in Northern California, spreading the Gospel of Jesus Christ, when a fire broke out on a hill directly behind where we were playing.

"Once we played a concert in Livonia, Michigan, and the next day we were supposed to play an afternoon performance in Buffalo, New York. It would have been easy to get there by cutting across Canada, but they wanted to charge us $1.00 duty on each of the 'The Way' albums we were bringing into the country. Well, we had three to four hundred albums travelling with us and we ended up driving all night, going around the southern end of Lake Michigan and finally arriving in Buffalo, only to find out that our contact had over stated his commitment. Our performance was to about a dozen people in a coffee shop. We ended up that night sleeping on the floor and in chairs at his house and having ragu and Kool-Aid for dinner. All we could do was to pray that God would bless his ministry and be on our way to the next town. Such was the life on the road. We met thousands of Christian brothers and sisters who treated us well and to whom we owe a tremendous debt of gratitude. All in all, we were still very blessed to chosen by God to do his work. Nothing will ever compare to watching the Holy Spirit work through our band and nothing ever felt as good as watching God softening people's hearts and welcoming them into the Kingdom of God."

I was in junior high school when The Way's second album arrived in unopened boxes at the Calvary Chapel bookstore in Costa Mesa. I had been anxiously awaiting its release, and I'll never forget buying the very first one as they cut open the first box fresh off the truck. Huge fan then, still a huge fan. I've also learned how to play guitar with most of the first album's songs.

IN the late 70's Bruce Herring was worship leader for Calvary Chapel Huntington Beach. I was on his worship team. SO gifted. He mentored me spiritually and musically. I am so grateful, I'm still in worship teams and playing like he taught me!

I was attending Calvary Chapel, and those amazing concerts back in'69-'71, I was 16 yrs. old. I used to play their first album over and over. Through these 44 years "Closer to God" still goes through my head, I sing it to myself! I haven't had that cassette for 40 years! So now after all these years, I decided to go "on line" and try to get a recording of that album, and I stumbled on this fabulous article! It's so true how the Holy Spirit worked through these young men to bring us closer to God! Thank you for posting it! Now I'll go back to try to find a recording , God bless.

Great message, very interesting.
Thank you for the blessing you have been in my life for so many years. Also there was a song, I don't remember the name, but part of it was "seated on the throne with a rainbow ....with all nations bowing at his feet, I guess getting old and can't remember more. I loved it and it brought me through some rough times just playing it over and over and kneeling by the bed, GREAT TIMES.