This Beautiful Republic: Mike Rimmer met up with the Ohio rock band

Mike Rimmer met up with Ohio rock band THIS BEAUTIFUL REPUBLIC and explained to them the deficiencies of their name. 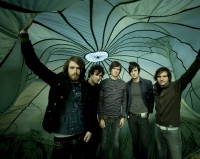 For a rock band who hail from Toledo, Ohio, the five-piece This Beautiful Republic have already made a dent in British consciousness. They received enthusiastic reviews for their UK dates in Cheltenham, Stoke-on-Trent and Exeter in August; their performance at the Greenbelt Festival brought forth similar accolades while all those who have heard their 'Even Heroes Need A Parachute', produced by Allen Salmon (engineer for albums by Sanctus Real and Mutemath), will tell you that they are an exceptional act in the vein of My Chemical Romance. The band consists of Ben Olin (lead singer), Andy Smith (drummer), Jeremy Kunkle (guitar), Brandon Paxton (bass) and Adam Smith (guitar).

I find myself in Nashville surrounded by the guys trying to get a recorded chat under way. I make a start but the band members take a moment to come to attention and I stop the tape and start again. It is now that I commit the ultimate music journalist faux pas. I call the band THE Beautiful Republic rather than THIS Beautiful Republic. Whoops! I observe that they've deliberately called themselves This Beautiful Republic to annoy people like me! "Totally!" They laugh and singer Ben Olin adds, "That's the whole point!" Guitarist Adam Smith chips in, "We thought, 'You know that Mike Rimmer guy? I know he's gonna HATE this! So let's do that.'"

Olin speaks some sense, "That's exactly why we chose 'This'; to set it apart. Because we know there's a lot of 'The' bands and we just didn't want to blend in as another 'The' band. So we said, well let's be a 'This' band and that'll add a little bit of a distinction." Adam Smith goes a little deeper, "If you're saying This Beautiful Republic, that means that you're there. Like we're in THIS room, we're not in THE room, you know? If it was The Beautiful Republic, it's something that's off in the distance or some other place. If you're there, it's This Beautiful Republic."

Their unusual name was created collectively. Olin explains, "We actually had a voting system designed and we threw out the best ideas. We locked ourselves in a room one day because we knew we needed a band name. We came up with the best ideas that we could find. This one actually came about from a combination of a couple of different ones but the meaning behind This Beautiful Republic is just that we're all part of the Kingdom of God. We're all a part of this republic, with the goal of glorifying Jesus. So no-one's better, no-one's worse. We're all equals and we should be working towards the same goals."

All this is fine to a point but I wonder whether anybody has actually pointed out the design fault of their band name? There are puzzled looks as I suggest this. I explain that I come from a kingdom. I am a subject of the United Kingdom, with the Queen ruling the kingdom that I belong to. I explain that they belong to a republic, which has no royalty, no king, no ruler, but just has a President. So there's a fault, because the Kingdom of God is a KINGdom, with a King. A republic has got rid of the king. We had a republic in the UK for maybe about 20 years when we executed Charles I and we turned it into a republic. No king! But then we invited the king back and we're now a kingdom again. I am a subject to a kingdom and as a Christian we're all part of the Kingdom of God. So the band name doesn't actually work!

They laugh at my suggestion, albeit nervously! Guitarist Jeremy Kunkle responds, "We actually looked it up in the dictionary and there are two definitions. One was: 'a group of people that has no king.' But the second was: 'a group of people working together towards a common goal.' So we chose the second definition and merged it with the Kingdom of God. So depending on which definition. . .! But we actually did see that."

Hmmmm, I am not convinced. Obviously these guys are reading an American dictionary! "I can understand the design fault though," Olin admits, "but This Beautiful Kingdom just doesn't sound good!" They erupt in protest, "It's just a band name! It's just a band name!" and dissolve into laughter.

Olin explains more about the vision, "Basically we just want to use what we're good at and what God has given us just to encourage others and uplift them and give them something more to life I guess. And in return we get the same from them. We're very dependent upon our fans and after the show, just hanging out with them, they encourage us. So it's like, we're giving of ourselves to them; they're giving of themselves to us. And it's all being done in a way that glorifies God. So everybody just gets uplifted and encouraged. We keep each other going. I'd say that's the whole point of everything. That's the whole point of the band name, of the record." He pauses and then adds, "And that goes for everybody, not even just bands. That's just the Christian life; helping each other out and holding each other up when we need it." 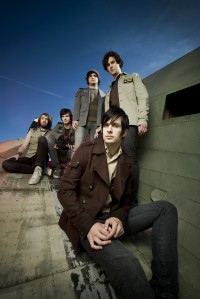 In my time wandering around interviewing bands, I have noticed that there is often a vibe of the band being a gang and this is reinforced by the fact that this band are in uniform. To accompany the title of their debut album 'Even Heroes Need A Parachute', the boys in the band have fake parachutes sewn onto their green uniforms. Very smart they look too!

Adam Smith explains the album title: "It goes along with the whole idea of This Beautiful Republic that everybody that's in it is equal and working towards the same goal. And 'Even Heroes Need A Parachute' is like those people that we think have it all together: the most talented, the most blessed people that we can look up to and admire, even they're going to need saving. If you're jumping out of a plane everybody is equal at that point and you're gonna need something to save you."

I encourage the band to share their vision with me for what they want to achieve. I suggest they dream out loud but instead they break into a chorus of the Everly Brothers' "Dream" complete with harmonies and everything then Ben Olin pulls them back together with a straight answer, "I think any musician", he explains, "creates music to be able to share it. So the more people that you can share it with the better. If you're dreaming, you're dreaming of playing festivals where there's a hundred thousand people and they're all sitting there connecting with you. From 300 yards back, they're still connecting with the songs that are being performed on stage. I think if we're to dream, it's playing in front of as many people as we possibly can but maintaining that legitimate creativity in the songs. But then at the same time, that connection with people really being effected and encouraged towards their relationships with God."

Who do they see achieving what they'd like to do? "Probably Delirious?" Brandon Paxton observes. Olin continues, "Every single time they play they have billions of people that show up, and they are all there to worship and they all feel the connection with the band."

But This Beautiful Republic are not a worship band. Ben responds, "But you don't have to be a worship band to be able to connect with 'worship' music. I think the lyrical content of our stuff is still very sincere. It COULD be worshipful. I mean, it could be a worship song if you played it in a worship style." Adam elaborates, "I think that in a sense, even though our style isn't considered worship we consider what we do to be worship. It's what we want to do. We want what we do to be honouring and glorifying to God, and also to be able to connect and share that glorifying and honour to God with the people around us and include them in that."