This Way Up: 3 Bands, 1 Sonic Assault

British grassroots bands CHASING STARS, SUPERVISION and TITUS are all featured on a new showcase album 'This Way Up'. Tony Cummings spoke to all three. 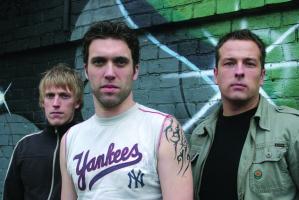 One only has to view the thousand-odd bands and soloists listed in the Cross Rhythms Christian Music Directory and then work out how few of them have a recording contract with a UK label to grasp that there is still much to be done to grow the Christian music scene in the UK. The majority of bands and soloists realise that the way to get started is to put out an independent release or two. But it's still true that a record label is needed to take an act to the next level and to gain them national recognition. Eastbourne-based Elevation Records, a subsidiary of ICC, has been quietly building a home base for British Christian rock talent. Its albums by Kato and Quench have sold well and certainly helped those groups find higher profile than they would ever have done as independent acts. Now Elevation have released the multi-artist album 'This Way Up' which with the subtitle '3 Bands 1 Sonic Assault' makes a bold leap forward in introducing excellent new rock talent to the racks of most of the UK's Christian bookshops. I questioned each of the bands - Chasing Stars from Brighton, Supervision from Liverpool and Titus from Newcastle - about the project, their past and future.

Chasing Stars may be a new name to most Cross Rhythms readers (they didn't even send CR a copy of the debut EP from 2003 'Straight Into The Sun') but the majority will have already experienced their musical expertise, the band having played extensively behind Paul Oakley as well as other worship leaders. The band's guitarist Matt Weedall explained why the band came together. "It is our dream to be able to make a living out of doing something we love - music. The band consists of Martin Cooper who plays guitar and lead vocals, Matt Leach on the drums and me on lead guitar. We all feel we have a creative spark which we love to express through music and the band is our outlet for this. Through our songs we aim to communicate some of our experiences of life, love, hope and grace to others which hopefully they can relate to." Matt Leach emphasised that there is a lot of difference between a Paul Oakley gig and a Chasing Stars one. "With Paul it I more likely to be predominantly Christian audience and the purpose of the event is, obviously, worship focussed. With Chasing Stars we usually have no idea who's going to be there and the songs are very different. Our material looks to talk more about life and some of the issues, difficulties or even realities associated with it. Quite naturally because we are all Christians, a good amount of hope, grace, faith and love are contained within the songs."

The recording sessions for 'This Way Up' were memorable. Recalled Martin Cooper, "One of the main emotions that I felt was of how privileged and humbling it was to watch people give up their weekend to put all their energy into working on songs that we had written. Also on a personal note, I belong to Kings Church in Eastbourne, which is the same church as Adrian Thompson the label manager at Elevation, who also produced our songs on the album. I tend to wear my heart on my sleeve in pretty much every situation, for better or worse, so it was definitely nice to have someone in charge who was part producer, part pastor for the weekend! As far as the actual recordings sound, I'm particularly pleased with a song called "Only Human". I wrote it during a particularly difficult time last year and I think the sentiment of the lyric has been captured pretty well on the album."

Of the three bands showcased on 'This Way Up' the best known, at least to regular listeners to Cross Rhythms City Radio, are Liverpool's Supervision. The band, consisting of Mark Doohan (vocals, guitar), Ian Finch (guitar), James Harding (bass) and James Birch (drums), have had some good independent releases with "Son Of A King" (from 1999's 'Dayglo'), "Pretty People" (from 2000's 'Shining Star' EP), "She Stares In The Mirror" (from 2002's 'Bring You Up To Speed' compilation) and "Heavenbound" (from 2003's '12 Hours' EP) getting playlist exposure. In 2003 they were winners of the Ultimate Events Battle Of The Bands contest though after playing for 2000 people at Alton Towers subsequent events were a bit of a let down, as Ian Finch explained. "After the Alton Towers gig we had a bit of an anti-climatic feeling. Things kind of went back to normal despite getting a few more gigs and the elusive 'record deal' was still nowhere to be seen. We started soul searching again about the future and our vision. Then in September we were offered a secular management 'deal' that aimed to introduce us to a larger label ie, Virgin or Independiente. It seemed like the dream 'deal' and it symbolised everything we had been working towards. So we prayed and fasted about it and, against the odds, we all felt that we should turn it down and focus for a time on serving the church through 'The Edge' at Frontline in Liverpool (our home church) and other youth events. It was the first time we had ever all unanimously agreed about the band's direction and it felt really good. Two weeks later we were confirmed as the support act for Replenish's 30-date UK tour from Feb-Apr 2004 promoted by Top Dog Promotions (agent for Yfriday, Steve, thebandwithnoname) and one week after that we got a deal from Elevation Music to record for their latest release 'This way Up'. God seemed to have been waiting for us to make the right choice and for the right motivation...and so that's where we are up to." 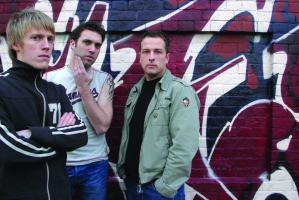 Mark Doohan admitted that there is a huge difference between the tracks on 'This Way Up' and the tracks on the band's previous '12 Hours' independent EP. "Our '12 Hours' CD was basically a snap shot of the band. We called it 12 Hours because it took that long to record and it really captures the live and raw sound of the band. It was kind of a demo, but also for the fans, who really wanted to be able to take home the latest songs. The tracks on 'This Way Up' are more of a glimpse of things to come and what you could expect from a studio album from the band."

Two of the tracks on 'This Way Up' are new arrangements of Supervision oldies "How Long" and "Here I Am" given a creative makeover with cool production work from producer Trevor Michael. "Back Up" is a brand new number. Explained Ian Finch, "'Back Up' is the first track we have ever really written and arranged in the studio environment bar by bar with a producer and we think the result is a significant step forward for the band sound."

Titus were originally featured in Cross Rhythms when, in 2002, we highlighted the musical activity of Newcastle-upon-Tyne. Their CD sleeve biography perfectly sums up the band's unlikely background, "It sounds like the perfect setting for a Channel 4 movie - three Chinese guys from Newcastle-upon-Tyne playing in a punk band." In fact, the high energy punk sounds evident on 'This Way Up' are a relatively recent musical addition for Pac Chum (lead vocals, bass), Matthew Ng (guitar) and Paul Fung (drums). Their earlier independent releases 'The Ground Had Shook' (2001) and "I Could Run A Thousand Miles" single (2002) had little of the edgy guitar excitement that producer Pete Lozinski has now brought out of the band. Said Matthew, "We are definitely a rock/punk band with an American type of sound these days if you get what I mean; I think that's due to Paul and myself watching too much Kerrang MTV and loving too many American rock bands. Although our sound has changed our heart for worship has not. Many people in our gigs, as well as ourselves, have had some of the most intimate times with God whilst doing full-on rock."

Matthew spelt out the serious spiritual mission behind the fun-loving punk team. "Titus' spiritual mission has always been simple; it's about delivering the awesome message of hope, truth and Jesus Christ, that he is crazy for you all! There's no doubt in my mind that if Titus was just an ordinary punk rock band it would have ended long ago. The spiritual mission is the key; the reason why all three of us strive to do what we do. And have stuck together and agreed to carry on walking this crazy and difficult road. It's times like these that we receive comfort by knowing that this is what God wants us to do, this is the path that was made for us, his purpose for us is bigger than our own desires. And this is only the beginning for Titus!" 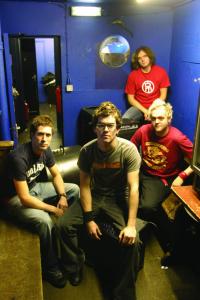 Like the other bands, Titus thoroughly enjoyed the 'This Way Up' sessions. Said Matthew, "The recording sessions were fantastic, we honestly loved it all. It's everything that every rock band has to go through. Long hours, late nights, lots of coffee, lots of junk food and a lot of sitting around just thinking and laughing. But the thing I most remember is Neil Costello teaching Pak the secret art of wrapping up guitar wires! Eddie Izzard was in the other studio doing a recording session! Shame we didn't have time to talk to him, I wanted him to do some backing vocals with us!"
Â
Things are already looking bright for 'This Way Up's grassroots bands. As I write this, Titus are about to kick off a major UK tour supporting Fierce! artists Superhero while Supervision are currently on a 30-date UK tour with Replenish. Toughing it out in the unglamourous world of UK-style grassroots Christian rock is far from easy. The fact that this talented trio have got this far down the road says much for their resilience as well as their creativity. Here's hoping that Elevation Records will be producing more projects in the future to build the platform for spiritually relevant youth culture music.

I have a band in east London called Salvators Gun. We are Christians and playing some good hard rock n roll with a strong message of the amazing hope that Jesus brings. We are looking for gig opportunities and I came across this article and it was great to read material from like minded people. It would be great to link up in terms of gigs and communication 'iron sharpens iron' and all that. If you could help us get some exposure that would be really cool. Bless you guys