The sun shone, the Spirit flowed and the music played on and on. Over three glorious days on 7th, 8th and 9th July, 3,000 people came to Risdon Farm, Okehampton, Devon to experience the fifth Cross Rhythms Festival: Table In The Wilderness. With the words of some of those present and the photographs of Lukas Willcocks we record some of the sights and sounds of Cross Rhythms '95. And we kick off this tribute with a word-for-word transcription of a word from God brought to the festival by Australian prophet musician Stephen Bennett. 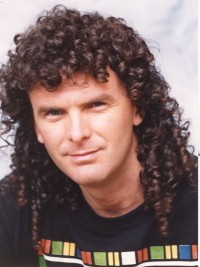 A PROPHETIC WORD
"The Lord has given me a word for this festival. There's an anointing that God has placed upon this festival and the Lord will raise up many voices, not just through this festival but through the machine, through the administration and through the leadership as they seek God and his very heart in this hour. And the Lord will bring sounds from across the nations of the earth to this area and many people will discern in their spirit to come and redeem the sounds of the earth for the purposes of the Lord. And I shall lift you up says the Lord, and I shall make your name known and there will be people queuing to come says my father in Heaven. And I see that financial provision will not even be an issue and I stand against the powers of darkness who would come against the provision for the work of the Lord and I release abundance to Cross Rhythms and all the media endeavours that they will pursue. Today's a new day. The heavens are open says the Lord, and I shall pour out my melodies from Heaven and many shall come to know me. And the Lord says to the leadership, father my Levites, father my prophets and father those that carry my heart in all the sounds in all the earth. And as it is written in the book of Daniel, when you hear the sounds of all sorts of instruments and all styles of music, multitudes shall bow down and worship Jesus Christ as Lord of Lords and then, everybody dances in the street..."
Stephen Bennett, New South Wales, Australia

Please note: We are excited by this prophecy and deeply respect the ministry of Stephen Bennett. However, whilst we are confident at Cross Rhythms of God's leading of our ministry and are open to prophetic input we believe it is important not to be incorrectly swayed by prophetic counsel but to allow God to outwork His purposes, and by looking at Jesus Christ ensure that, as a ministry, we are in a spiritual position of obedience for the prophetic to actually be fulfilled.
Chris Cole, CEO Cross Rhythms.

ANOINTING
"Highlights for me included Split Level, Electric Revival, the Sanctified Dance party - big thanks to Paul Cross who was the perfect host and deejay, Dave Omellas, Tony Loeffler, Stephen Bennett and those seemingly omnipresent Blue Angels. Messrs Omellas, Loeffler and Bennett do not play what I would call my type of music, but the anointing and blessing of God upon them was something not to be missed. The day of prophetic music ministry has arrived."
Paul Leader, Tonyrefail, South Wales

TIME TO RELAX
"My husband was touched by the Holy Spirit in the Mega tent on Sunday morning and still really feels empowered to bravely go where God is sending us. Even just a week later the picture is clearing about what God wants to do with us. As well as the thrill of seeing Split Level live on Saturday and realising we were too old to dance for that long we were really touched by Stephen Bennett as well of course as all the other brilliant musicians there. Thank you. And special thanks to the ladies who ran the crÃ¨che. Just to have two hours every morning and afternoon not to looking around checking we hadn't lost Tabitha (22 months) or Benjamin (four and a half), wanting to go somewhere else was wonderful. It was brilliant to just have that time to relax."
Mike and Diane Cromie, Frame

CRYING SESSIONS
"I just want to say that Cross Rhythms this year was brilliant, probably the best year yet! This year I went to more of the talks in the seminar/ministry tent and received prayer and had a few good crying sessions! I feel so released! In previous years I've only ever been for the music, but I'm definitely going to go back to the seminar tent next year, God willing! I also spent more time in the Arts And Theatre tent too -very good, especially the dance."
Alex, Torquay

BLOWN AWAY
"I must say that I was completely blown away by the whole event. The standard of those I managed to see in the Mega tent was exceptionally high. It would be unfair to pick one particular band but I think Margaret Becker must be one of the most exciting artists both to see and hear. Tony Loeffler, Dave Ornellas, Nuffsed, Split Level, Two Small Fish, Breakspear, Chris Eaton were among others I was most impressed by both musically and the sincerity in which they came across to the audience."
Charlie Allansen, Torquay

SHAFT OF LIGHT
"For me I think the highlight had to be the Sunday morning worship service God really spoke into my life and ministered to me. I have a sister who is six years older than me and basically apart from not being a Christian she has everything I long for - a good job, house, husband, baby, etc. I have always seen myself as always being second best. God really spoke to me and showed me how important I am to him and at that moment the sun shone through a gap in the roof of the tent and fell on my face. It was just as if God was saying, 'You're so special to me I've chosen to shine on you.' It was amazing. During the ministry time the Ornellas family sang "Heart Of The Sons" and it was as if my 'dwindling' relationship with God as my father was completely restored. I left Cross Rhythms refreshed and really hungry for all God has for me (I was also physically shattered and couldn't wait to have a bath and sleep in my own bed!). Things haven't stopped since! On Monday night I went to Aglow where God again really spoke to and ministered to me. When I got home from Aglow I picked up some Bible reading notes that I haven't used for at least a month and I couldn't believe what I was reading. It was a new series and it was all about how we see ourselves and how God sees us. Everything I read that night and since then has completely confirmed what God started at Cross Rhythms - it's fantastic!"
Jo, Plymouth

CROSS RHYTHMS' CROSS RHYTHMS
"We took about 35 people from our church and everyone without exception had a thoroughly good time. The brilliant weather obviously contributed to the holiday atmosphere but it was the overall content of the weekend that was mostly appreciated. Personally I thought the musical content of the Saturday evening in the Mega tent was excellent. As an aging youth leader nervously eyeing 40 the highlight for me was the set by the Ornellas family backed by the Blue Angels and then Tony Loeffler And The Blue Angels themselves. These guys were unknown to me before the last few months but they made my feet dance like they haven't danced in a long time. The cross rhythms created by the four percussionists overlaid by guitars and sax was an experience I shall remember for a long time. Those guys know how to play rhythm and blues and I was moved to rejoice. Hallelujah!"
Marc A Nash, Plymouth

UP-AND-COMING
"By far the best band appearing was Split Level, whose name I had heard but whose music was something new to me. Eden Burning were also rather good as were Nuffsed and No Second Chance who stole the show as a young up-and-coming band."
Chris Gardner, Isle Of Wight

FRESH WORSHIP
"Stoneleigh '95 was one of the best Christian events I've been to in years. The other one (yes, really!) was Cross Rhythms Festival '95! Truly inspirational. We got home and Herbie (drummer) was explaining the joys of the rave worship he'd been to at CR to the church worship band. So the very next Sunday we put some of his ideas into practice. Result - fresh worship!"