Through Solace: The Welsh hardcore band who've landed a US record contract 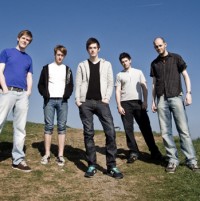 It's the tail end of 2005 and I'm interviewing a couple of lads on my rock show about a new event they're putting on near Birmingham, UK. In his best Black Country accent, one of them volunteers, "Here Greg, you've gotta play these guys - I reckon they've got a lot of potential. Dave at Meltdown is thinking of taking them on." He digs out a CDR from inside his tardis-like backpack and I give it a listen. It's pretty rough but I trust the guy's judgment, he's got a history for finding UK bands before the crowd, and I know that Meltdown are very fussy about who they work with. So I give "Graeme Lawrence" a few weeks' airplay, with the disclaimer that it is just a rough demo. Rough it may be but it certainly has something.

Fast forward a few months and some skinny Welsh kid gets in contact with me to say that he's just finished recording a new EP and I should check out his myspace. I did and BANG, 'An Innocent Confession' by Through Solace wakes up my speakers and knocks me for six. Luke Nicholas and his fellow band members have clearly found a producer who's captured their mid-career Zao-meets-Nodes-Of-Ranvier sound bob-on, instead of that rather discordant mess I heard on that CDR. The EP alone went on to get Through Solace festival appearances across Europe as well as a number here in the UK. And when, of course, people went to see them live it became instantly obvious why they'd become such a crowd puller. Luke Nicholas sings and writes like Tim Lambesis but looks about half his size! This slightly built young man, who looks like mother's favourite, is a crowd stirring gravel-gargler, who has not just got a bee in his bonnet but has a hive's worth lodged halfway down his gullet. But when you step back and work out what this fella is banging on about, it really is deep and poetic, hence my earlier comparison to Lambesis.

At Greenbelt 2007 the band tell me their next EP is going to be picked up by a label. I start quizzing Luke on which company it is going to be but he's careful to keep his cards to his chest. "We've got European distribution sorted but hopefully we've got something sorted with a US label. Anyway, I've gotta go and soundcheck now." What follows is my first taste of 'The Stand', their EP picked up by independent US label Holdfast Records and put out in March 2008. What hits me is that the usual hardcore speed, passion and intensity is coupled with an added ability to incorporate melody and much more metallic edge. I mean, they'd already learnt how to make crunchingly thick and chunky brutality but now the guitars have much more of their own life - Kev Williams and Rob Milligan have done themselves proud while bassist Rohan Bishop and drummer Sean Fletcher have developed into a seriously tight unit. Even more encouraging, Kev has stopped in persisting in wearing his Barry Town soccer shirt - they're a poor team with a dreadful strip! Nuff said!

Rather than rushing into that elusive debut album Through Solace buy time and fan support with their two tasty EPs and wait for the right deal to emerge. At the time of 'The Stand''s release they state, "We're putting the CD out there as a taster of what our band is all about, and at the same time a reward to people who have given us their support for a few years now, and have been waiting for a mature and more sophisticated record." 'The Stand' earn them tours across Europe and the US and help to cement their identity as a Christian band rather than a bunch of Christians making music. Says Kev, "I met a kid in Alabama and he explained how our lyrics helped him to restore his faith. I'm thinking, that's it, that's what it's about."

After more than two years of lying dormant, Facedown Records' subsidiary label Strikefirst remerged with a new roster and new goals. Amongst their first four signings was Through Solace. Their patience paid off and the final piece in the debut album puzzle fell into place. Recording took place in January 2009 and the album came out in May. But it hasn't been until this July that the band have been able to tour their debut album, university studies and the small matter of a European election getting in the way - Luke works for the Welsh nationalist party Plaid Cymru.

So why on earth did Strikefirst take a gamble on a bunch of part time musicians from the other side of the Atlantic? Kev tries his best to explain, "About a year ago Luke emailed Jason Dunn from Facedown Records and told him about the UK Christian scene, about how it is small but it is growing. And I think that's what intrigued Jason to try it out, to try and get the name of Strikefirst out over in the UK." Things were helped along at last year's Freakstock event over in Germany where the lads got to share a backstage room with Facedown legends Seventh Star, who went on to recommend them to the Facedown founder.

'The World On Standby' has a great feel, the first six songs are pretty much an unrelenting surge of brutality. Then "Landmark" creeps into gear and nods to a more melodic edge appear. According to the guys we can expect more of Rob's clean vocals to offset Luke's gargling screams on their next release. The second half of 'The World On Standby' really sees the band experiment with various sounds yet always being able to find their way back to that innate brutality.

So what's the future for Through Solace? Are they going to follow their fellow countrymen (Lostprophets, Funeral For A Friend and Bullet For My Valentine all hail pretty much spitting distance from Through Solace) and head over Stateside as no doubt their label would relish? Responds Luke, "We are basically Welsh guys that play in a band, rather than a band that is a brand that can be relocated here and there. We do other things aside from music and we'd want to stay here, but at the same time we'd definitely like to see different places and take our music there."

Explains Kevin, "Through Solace wasn't originally a Christian band, it was a band of five Christians. But then we all decided to be a Christian band. There are so many bands out there with no intention behind what they do, there are no feelings. So to put our faith out there. To me it's what hardcore should have, you represent yourself through your music." Backing up Luke's statement on where they're meant to be right now Kev continues, "I met up with a friend a while back and he asked me about our song 'Navigators'. He said he was really into the song and wanted to know what it means. So I started to explain. I met up with him more recently and now he's started going to a church in Cardiff every week. It doesn't work with everyone but if it works with at least one person then to me it's job done."

The opinions expressed in this article are not necessarily those held by Cross Rhythms. Any expressed views were accurate at the time of publishing but may or may not reflect the views of the individuals concerned at a later date.
About Greg Sammons

Having completed a BA in Politics and an MA in Broadcast Journalism Greg Sammons presents a number of shows on Cross Rhythms Radio, as well as writing for the website. Heâs based in Stoke on Trent and on top of his faith has two big passions: comedy and hard music.