Tim Jenks: The blusey Wolverhampton songsmith only too conscious of the sounds of time 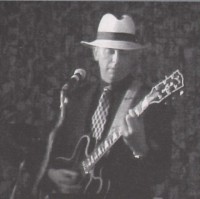 Tony: Give us a potted biography.

Tim: The late '60s saw me introducing the electric guitar into our local church and the start of gospel rock making an impact within the coffee bar circuit. With a constantly changing line-up we settled on a three-piece boogie blues band called Life which spent most weekends hacking up and down the M6 to church coffee bar outreaches. With gig demand ever increasing I prematurely ended my teaching career in 1974 to form the full time pro band Aaron and after a year touring pubs and clubs - the emphasis being on playing places Christian bands normally didn't - Aaron was invited to tour high schools and colleges in the USA. Two nine-month tours followed and we successfully took on the secular glam-rock scene. However I returned to the UK in 1978 and family commitments with the birth of my first son Dan - who now drums in my band - meant the demise of Aaron before a recording deal could be secured. I joined Rocksalt in the early '80s, joining up with ex-collaborates from the Life days. Again heavy scheduling at weekends in church halls saw a radical approach to Christian music based on good ole rock 'n 'roll. The '80s saw a fall off in demand but I continued to file away songs and take on the odd church hall concert or pub gig by forming a band on demand. The four songs on the CD are a representative selection from a lengthy repertoire spanning three decades.

Tony: What is the current line up?

Tony: What keeps you motivated in music?

Tim: I've always wanted to take the "positiveness" of playing and singing about my faith into the secular music field. Aaron was formed to do just that. I believe we have to earn the right to talk openly about our faith having convinced the audience we are accomplished rockers just like any other charting rock band today.

Tony: If you died today and the Lord asked you to play him a song, what would you choose to play?

Tim: I'd do a quick medley sample from "Sands Of Time", "Heaven Bound" and "Light That's Shining" (a song not yet done with the band in the studio!). The one song that probably means more to me than most is "Sands Of Time" - John and I first came up with it, we reckon in 1968 - I've been playing it at every gig ever since!