Time Tunnels: A journey through history of Christian music 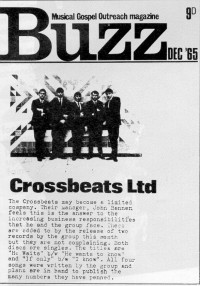 May/June 1972
A special investigation: The truth about the Jesus People" trumpeted the front page of Buzz magazine in June. Having come in for some criticism for failing to recognise the cultish tendencies of what appeared to be bona fide American Christian organisations, Buzz this time garnered quotes from the experts, including Arthur Blessitt and Larry Norman, who summed up the Jesus People beliefs very succinctly: "God demands that we abandon our sin and turn to him for forgiveness and new life." - Speaking of Larry Norman, Polydor Records had released a mainstream single "Righteous Rocker, Holy Roller"; Buzz described the style as a cross between T Rex and Don McLean's "American Pie" - Very much involved in Jesus Music later in the decade (they even did a live album at the acknowledged birthplace of the movement, Calvary Chapel, Costa Mesa), were Malcolm Wild and Alwyn Wall, soon to release their classic album 'Fool's Wisdom'. In a full page article in the June Buzz, the lads from Sutton-in-Ashfield, Nottinghamshire, described how they'd worshipped the Beatles during the mid-'60s, and how they looked for what Malcolm described as "the 'what's it all about' bit" via transcendental meditation through the personal recommendation of George Harrison. Then, thanks to two very ordinary and nameless guys, they found that Jesus had all the answers. These days, Malcolm is pastor of Calvary Chapel, Merritt Island, Florida, and Alwyn is in the ministry team at Calvary Chapel, Westminster, London. - The Glorylanders, the UK's popular folk gospel trio, announced in the May issue of Buzz that they were going to be "full time but not professional", having taken the decision to leave their day jobs with effect from August. Arthur Pemberton, Bill Simmons and Ian Moore (who still get together from time to time for the occasional gig) had formed a fellowship of supporters, each of whom would pay a membership subscription of Â£1. - Very few Christian releases for the reviewers to peruse; apart from Larry Norman's above-mentioned single and the continued promotion of his album 'Upon This Rock', along with Graham Kendrick's 'Footsteps On The Sea' and the Imperials' 'Time To Get It Together' (all released by Key Records), Word's newly created Myrrh label announced 'Keep On Singin" by Andrae Crouch & The Disciples.

May/June 1982
Cover girl in the May issue of Buzz, Sheila Walsh, whose second album 'No One Loves Me Like You' (described by the Buzz reviewer as "Sheila Walsh for those who like the voice but can't take the power...") was new in the shops. An in-depth article (complete with a couple of cheesy photos of the lass taken in the 70s) traced her life and career, including how she came to terms with the death of her father when she was five and how originally she'd wanted to be an opera singer. The second album, described by Sheila as not a follow-up to her first album, 'Future Eyes', had been released on Kingsway Records, following the collapse of the much-trumpeted merger of Kingsway with Chapel Lane. Meanwhile, in the States, 'Future Eyes' was getting the hard push by Sparrow Records: big block letters headline of one ad in CCM Magazine - "SHEILA ROCKS!" - Buzz celebrated its 200th edition in June, with a retrospective of its history which had begun in October 1965. The first issue, price nine old pence, had had eight pages, one of which was blank, and a front page editorial. Later covers featured, amongst others, Mary Whitehouse, Cliff Richard (three times), Johnny Cash, Roy Castle, Corrie ten Boom, tennis star Roscoe Tanner, and, more unexpectedly, John Travolta and John-Boy from The Waltons. - Those due to appear at Greenbelt '82, venue for which was Knebworth Park, near Stevenage: Norman Barratt and Bryn Haworth with their respective bands, Graham Kendrick, Adrian Snell, London's gospel funk outfit Paradise, the Resurrection Band, Servant and Kenny Marks from the USA, plus Moral Support, Paul Field, The Predators, Giantkiller and ex-After the Fire drummer Iva Twydell. - Meanwhile in the USA, CCM magazine looked at Leon Patillo, eight years on from his Christian conversion and five years after he gave up being lead singer for Carlos Santana. CCM also carried an interview with Cliff Richard, who at that time, despite having been in the music business for 24 years, and a Christian for 16 of them, was nowhere near as big a name in both mainstream and Christian music in the USA as he was in Europe; and a very positive review of Bryn Haworth s classic 1980 album The Gap', released in the USA by StarSong Records, with comments such as "...one of the premier slide guitarists in the music world... Bryn has kept the material simple and delightfully predictable, with a lot of good hook lines."

May/June 1992
As the months between issues of Cross Rhythms widened as it fought for survival, America's CCM magazine for June featured Rich Mullins, with some wonderfully ethnic photographs of him barefoot, with holes in the knees of his jeans and hair almost down to his waist. During the interview Rich talked about his song "Elijah", which he wrote in late 1980, just after John Lennon was killed, calling it "the first song [I wrote] where I forced myself to dig under a lot of the cliches of the Christian faith. I wrote a song that said 'someday I'm gonna die, and I wanna die good.'" Prophetic, because in many ways, "Elijah" became Rich's epitaph. - Word's Premier advertorials for May and June gave the big push to new albums by Marilyn Baker, Keith Green (the release on CD and cassette of the compilations The Ministry Years Vols. 1 and 2') and Michael Card. News items included a preview of the upcoming lona album 'Book Of Kells' with new members Nick Beggs (ex-Kajagoogoo) and Terl Bryant joining Dave Bainbridge, David Fitzgerald and Joanne Hogg); the launch of Metal Direct, a record club for hard rock, thrash and metal enthusiasts (Recording of the Month, live: Blow The House Down' by One Bad Pig); and some new collector boxed sets, including the complete three volumes of Charlie Peacock's 'West Coast Diaries' and 'Decade', a collection of cuts by Kerry Livgren recorded between 1980 and 1990. - Unconfirmed but strong contenders to appear at Greenbelt 1992 included: Martyn Joseph, Don Francisco, lona, violet burning, Adrian Snell, Runrig, Ben Okafor, Fat And Frantic, Vigilantes Of Love, Over The Rhine and the Dakoda Motor Co. - The BBC announced another series of Radio 2's The Gospel Train, featuring specially recorded live cuts by British gospel artists, plus the best of traditional and contemporary black gospel music on CD. Fronted by US disco diva Gloria Gaynor, the show would air on Thursday evenings for six weeks during May and June.