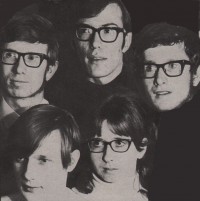 The front cover of the February Buzz reported the arrival of "the greatest import from America since Batman," a six-boy, three-girl folk band from California known as The Forerunners. Their folk tinged MOR and their amazing enthusiasm (they would practise for up to eight hours each day) knocked me out when I heard them live at an MGO Conference. Their eponymous debut release was issued in the spring of 1968 by Key Records and they made two more albums for Key before the band folded in the early 1970s.

Meanwhile, once upon a time there was a British band based in Putney known as...The Forerunners! A potential problem was neatly avoided when the Brits decided to change their name as they felt it didn't quite fit with the gospel prog rock they were beginning to play. The band told Buzz that they'd never heard of the American outfit, so the existence of the "other" Forerunners wasn't a factor in their decision. Their new name? Whispers Of Truth. I am not going to ask "Where are they now?" because I know. If the two bearded guys look familiar, it's because they are Graham Kendrick and his brother Peter; also in the band, their sister Gill, along with Coleman and Martin Poole.
The band never made a full album, only four of their songs were ever recorded; although Pete Meadows of MGO wanted to do an album, the band had decided to go their separate ways by the summer of '69. These days, Martin is a Baptist minister in Godalming, Rick is an organic farmer in South West Wales, Gill sadly died in 1988 after contracting cancer, Peter is a full time evangelist with the London City Mission, and if you don't know what Graham's doing with himself, what planet have you been on these last 30 years.

Last issue I asked whatever happened to pioneers the Crossbeats, Liverpudlian purveyors of gospel beat music. Well, reader Geoff Matthews reports that Eddie Boyes, Sam Pennington and Eric Knowles are still making music and are currently doing local productions of The Promise' around Merseyside. FOOT AND MOUTH DISEASE STRIKES GOSPEL GROUP was the intriguing headline in the March '68 Buzz. The van belonging to Lincoln band The Advocates broke down as it was being driven through a disinfectant dip. Meanwhile, North West-based group The Gospel Rhythms were coming home after a booking in Scotland when their van expired in Carlisle, leaving them to go home on the train; the van was only restored to health after an engine/gearbox/clutch transplant. If these gleanings from the pages of UK Christian music mag Buzz sound a tad parochial, it's an accurate reflection of where the keen but insular UK Christian coffee bar scene was in early 1968. Things were different in the States. A single was soon to show fleetingly on the American Hot Hundred, "I Love You" by People, a band formed in San Hose, California by guitarist Geoff Levin and including in its ranks Randy Stonehill and Larry Norman, about to arrive! 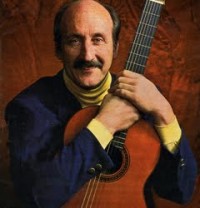 Ex-Peter Paul & Mary member Noel Paul Stookey played a four-city UK tour at the beginning of March to coincide with the release of his new album 'Real To Reel'. Support for the four concerts was provided by Stewart & Kyle, Adrian Snell, The Jesus Centre Band and Nutshell respectively. Also touring, Karen Lafferty, probably best known for her worship song "Seek Ye First The Kingdom Of God"; an album by Karen had just been released by Maranatha! Music, its title 'Bird In A Golden Sky'. Other tourists included After The Fire, Ishmael, Garth Hewitt, Stewart & Kyle, Rodney Cordner, Steve Flashman, Barry Crompton and Bryn Haworth (pictured), fresh from his session duties on Cliff Richard's soon to be released 'Small Corners'.

Amazingly, according to the 1977 Buzz Readers Poll the most popular CCM album in Britain was 'Adam Again' by Michael Omartian (yep, the veteran producer-back then a singer as well). Top UK album according to the Buzz readers was 'The Prize' by the Alwyn Wall Band. John Pantry (now of course a Premier Radio broadcaster) brought out his classic 'Empty Handed' album Irish group The Genesis made the Irish Top 10 with their Christmas album. The youth choir The Continental Singers were looking to recruit at least a dozen more male singers for a new UK group to tour during March and April; applicants needed to be aged 16-25 and be vocally or instrumental proficient.

On offer In Word's Premier magazine, Stormie Omartian's 'Low Impact Aerobic Workout Video' - "low impact" because you keep one foot on the floor at all times (one foot in the grave, more like!). Word launched Hosanna! Music into the UK in February, billing it as "a vibrant new dimension in quality praise and worship recordings." 'Lamb Of God', featuring Graham Kendrick (that's the third time I've mentioned him in this feature!) as guest worship leader, was Premier's praise and worship album of the month. Other albums on offer in Premier included 'More Precious Than Silver' by Lynn DeShazo; 'Breaking Bread' by Paul Field and the MAYC Choir; Heart Of The Shepherd' by John Michael Talbot; 'Count It All Joy' by Debbie McClendon and 'Russ Taff' by the ex-'Imperials' singer.

Almost 10 years to the month since its first release by EMI, Cliff Richard's celebrated gospel album 'Small Corners' finally made it onto CD courtesy of Word Records. Tongue very firmly in cheek, the reviewer wrote: "This is another of those cases where the artist has started to make a name for himself and wants to cash in on it by crossing over to the more lucrative Christian market. This young man has a bright future ahead of him and remember, you heard it first from Word."

Premier's Contemporary Album of the Month for February was Steve Taylor's 'I Predict 1990'. It had been scheduled to be released in time for Steve's visit to Greenbelt 1987 and Premier gave the "official" reasons for the delay. These included, Record label wanted duet with Sandi Patty; Steve had left music to become a Sumo wrestler; Steve had spent the last two years developing the world's first edible CD.