"The story of how the Jesus People came alive, told in music" was the tag line of a full page advert publicising a series of International Jesus People concerts, due to be held in Watford and Walton-on-Thames in April, with two more gigs in Chatham in June. Top of the bill were a group of converted Californian hippies known as Â°The Sheep, whose first album was released by the newly formed Myrrh label in the summer. The West Coast rock sound of the band would go down very well with the punters at the first Greenbelt Festival the following year. Â° The Forerunners, the easy listening folk gospel band from Campus Crusade For Christ International, were back in the UK for a very short tour in April, having toured Southern Europe and Ireland in the early part of the year. Reflecting the current trends in both mainstream and Christian music, gone were the acoustic guitars, string bass and banjo (a wise move, I'd say. Ed) and in their place came electric guitars, piano, keyboards and drums. Personnel of the latest line-up was five guys and two girls and they had brought with them a new album, 'Prepare The Way For Jesus' Â° Some memories of the pop scene of the late 1950s were evoked by a news item in Buzz for April, referring to a British singer whose fame (or notoriety) was not so much connected with his performances on stage or in the pop charts (none of his three hit singles climbed higher than number 15 in the UK), more with his anti-social public image. Terry Dene, born Terry Williams, had had brief British pop chart success in 1957 and 1958, but fell from grace after being convicted of drunkenness and vandalism. After having had his National Service terminated after two months due to being classed as mentally unfit, he dropped out of pop music, but then announced that he had become a Christian and began a ministry as a musical street evangelist in Sweden. The news item revealed that Terry was planning to return to the UK and that British Youth For Christ evangelist Tony Stone was to look after his engagements. In 1978 Dan Wooding collaborated with Terry to write the book I Thought Terry Dene Was Dead, which was the companion to an LP with the same title. Â° 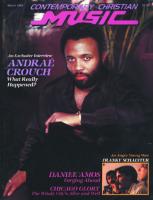 Following the news of the arrest of gospel pioneer Andrae Crouch on drugs possession charges the previous month, CCM magazine ran an in depth interview with Andrae where the singer tried to give his own account of proceedings and explain how the whole incident had affected him. Apparently, some suspicious-looking stuff found on the carpet of his car was powdered chicken soup (Andrae was trying to follow the in-vogue-at-the-time Cambridge Diet to try and lose some weight), and an empty phial and straw, used for snorting cocaine, had been left in Andrae's apartment by a non-Christian acquaintance who often used the place while Andrae was away touring. Although the charges were dropped due to insufficient evidence, the experience had still left Andrae shattered and bruised, but he was gradually getting back to something like normal, thanks to the ministry he received at his father's church. Additionally, Christians around the world had sent thousands of letters and messages of support. Â° Adrian Snell appeared to be Flavour Of The Month on both sides of the pond. His new album 'Midnight Awake' was reviewed by Tony Cummings in the March Buzz magazine: "Few Christian musicians in Britain have a broader sweep of musical expression than Adrian Snell." Meanwhile, in the USA, CCM magazine reviewed "The Virgin" in its April issue (get in early for next Christmas!), and discovered it to be "a captivating recreation" of the birth of Christ, and "finely crafted and acutely penetrating." The Greybearded One's choice for Buzz Album Of The Month in April was 'War' by U2; "(with) songs of maturity and quality.they now richly deliver an album which manages to live up to every column inch and airwave minute of its pre-release publicity." I think he liked it! Â°

From being close to disintegration at the turn of 1983, After The Fire were reconsidering their future. In contrast to their lack of chart penetration in Britain, their latest single "Der Kommissar" had reached the Canadian Top 10 and was climbing the charts in the USA as well. Additionally, a compilation album drawn from their first three albums was also selling well in the States. Pete Banks confessed to Buzz in April that they had been ready to pull the plug on the band at Christmas because of the lack of success, but in view of what had been happening, they had decided to continue cautiously, watch out for divine guidance and take things one day at a time. In fact, their album sales in one five day period in the USA had exceeded the total UK sales of their first album 'Laser Love'. Â° Bizarre Item Of The Month has to be a report in the April CCM magazine that Christian country star Dennis Agajanian played the William Tell Overture on a guitar whilst riding his off-road motocross bike at 40 mph - and a photograph was published to prove it. It could only happen in America. Â°

The long wait for subscribers was finally over when the February/March Cross Rhythms appeared, the first issue since November/December. Acoustic troubadour evangelist Don Francisco, about to embark on a sellout British tour, was the cover story and his 'Come Away' was already a top Christian bookshop seller. Â°
"Pope Attacks Chart" was an intriguing news story headline in Cross Rhythms. Closer inspection revealed that, instead of the Vatican speaking out against the evils of pop music, the piece was about Mal Pope, whose latest single "Golden Days" had been released into mainstream record shops in January. Sadly, the Mumbles man caused nary a ripple in the Top 75. Â° Adrian Snell, meanwhile, had intended to follow up his 1992 release 'Kiss The Tears' with an instrumental album, but these plans had been shelved because he and Phil Thomson had been commissioned to do a concept album about the problems of people with disabilities. This would appear later in the year as the stunning 'Beautiful...Or What!?' with Adrian teaming up with Caroline Bonnett. Â° The March issue of Cross Rhythms reported on the application for medium wave radio frequencies in London by a consortium fronted by former Buzz editor Peter Meadows. This would finally come to fruition several years later, when Premier Radio hit the airwaves. Meanwhile, United Christian Broadcasters (UCB) had achieved one of their objectives in January when they began broadcasting via the Astra satellite. Â° Cross Rhythms also reported that David Fitzgerald, founder with Dave Bainbridge of the legendary Celtic band Iona, had left the group to concentrate on finishing his music degree. His replacement would be Mike Haughton, who had depped for David at Greenbelt '91, when David was away touring in the Soviet Union with Adrian Snell Â° Due to tour the UK during 1993, Phil Keaggy, The Allies, John Michael Talbot and (a treat for all metal heads) Bloodgood. Speaking of Bloodgood, their erstwhile lead guitarist David Zaffiro had released a second solo project " Surrender Absolute". Â°

I am looking for the lyrics to the song Second Coming Sunset by Matthews, Taylor and Johnson in 1972.

It's good to know that people put together sites like these,to discuss music.I am in my 30's and have a lot of Q'S and possibly A'S of bands,songs..some i have found,but still looking for others.Feel free to chat...Thanks

does anyone remember a christian christmas rock album that came out i think in the 90's maybe the late 80s?

Reply to Kasey:
"Why Should The devil have all the good music" is a song from Larry Norman. This is a song from the album "Only Visiting This Planet" from 1973. One of the greatest albums ever made (in my humble opinion).
The words below are from another song. For more on Larry's music, go to: www.larrynorman.com.

Glad to see someone else remembers Sheep. I've been trying to track down a copy of their album 'Why should the Devil have all the good music?' Anyone out there able to help??
Also, does anyone recognise these partial lyrics which I think are from the 80s:
Are you talking to the Father / Are you sharing His concerns / Or are you singing Hallelujah / While the man beside you burns'
I just want to remember the rest of it!!!