One Question that was occupying the minds of both Buzz editorial staff and Christian music group members in January 1973. Basically the question was, "Should music groups in a concert situation aim to communicate the message of Jesus entirely through their music and link chats between songs, or should a speaker be booked to give 'the preach'?" The debate had been started by a reader who had said that, as it was the business of music groups to communicate the Gospel through their music, if it was necessary to have a speaker, then the groups weren't getting the message across properly. The group members who had already responded were overwhelmingly in favour of letting the music do the talking. v Regular Buzz readers may have been more than a tad bewildered when their favourite mag appeared in January in both French and English. As the United Kingdom with effect from January 1st was henceforth a full member of the European Economic Community, Buzz had collaborated with French youth magazine Jeunesse Liberee (Freed Youth) to produce the bilingual edition. Articles from each magazine were printed in the other's native tongue and provided an interesting insight into the way each country tackled evangelism of young people. "Ten thousand start the New Year with Jesus" (a report on the January 6th Concert at the Albert Hall, with Parchment, Graham Kendrick, Malcolm & Alwyn and Larry Norman) sat alongside articles on the Spiritual Songs Festival in Nimes and the Carpenter's House coffee bar in Lyons. v Speaking of Malcolm & Alwyn, the Sutton-in-Ashfield duo had recently returned from their first working visit to the USA. Their month-long odyssey was made harder than usual because as first-timers, they had no network of contacts or pre-arranged personal appearances to smooth their passage. As a result, they did most of their travelling on Greyhound buses, and slept on floors and in spare rooms instead of hotels or motels. Despite this, they were able to put on a goodly number of successful concerts, mostly in California, so they were also able to see how much the Jesus Movement had grown up since the end of the 1960s. One thing had changed, though: back in the 1960s on Sunset Strip in Hollywood, where Arthur Blessitt had founded His Place, it was impossible to walk the length of the Strip without being witnessed to at least once by street Christians. Not any more: the only people Malcolm and Alwyn met were a Jehovah's Witness and a local Hare Krishna devotee. v Quote of the month from Graham Kendrick in his February article Rejoice In The Lord: An Encouragement To Worship: "I've got nothing new to say about worship, but don't switch off - the old stuff is pretty exciting!" 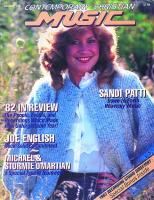 Usually at the start of a new year, there's at least one article that's a look back at the previous 12 months and in the January 1983 issue of Contemporary Christian Music magazine (to give it its full title) seven albums were given the accolade Best of '82. These included the smasheroo 'Age To Age' by Amy Grant, 'Songs For The Shepherd' by Keith Green, offerings from Mylon Lefevre, Bob Bennett, Mark Heard, Kansas and (very reassuringly for British CCM fans) 'Future Eyes' by Sheila Walsh. v Under the headline Crouch Crisis, Buzz reported in January that Andrae Crouch had been busted in Los Angeles for cocaine possession, but the charges had been dropped because the amount discovered had been insufficient to secure a conviction. Hundreds of Christians in California were reported to have begun intense intercessionary prayer. v The musical Daybreak by Paul Field (described as "a musical and dramatic celebration of the Resurrection") was about to start a nationwide tour, beginning in London in March and ending at Great Yarmouth in April. Two decades later, history is repeating itself: Paul Field's musical Here And Now (a musical and dramatic celebration of the Sermon On The Mount), is in the middle of a nationwide tour. v The number one album on the Buzz chart for January was 'Praise Him In The Sanctuary', recorded at the Dales Bible Week, displacing 'Fullness Of Joy' from the Downs Bible Week, which fell to number three. 'Songs For The Shepherd' by Keith Green was at two, with 'Now You See Me Now You Don't' by Cliff Richard at four. In February, Keith had knocked the Dales brigade off the top and Cliff had risen to number three. The Albums Of The Months (as raved over by Tony Cummings): 'Precious Lord' by Al Green ("this superb gospel album"), and 'Michelle Pillar' ("this album positively exudes class"). v Quote of the month is from Paul Baker's review of the first recorded offering by rock music satirist Steve Taylor, 'I Want To Be A Clone': "Call it new wave Christian if you like, the term's already over-used to include any rock that's a bit left field, but this is far out in left field. Steve's magic is that he makes us want to go far out in left field, as far as he wants to take us."

January/February 1993
Issue 13 of Cross Rhythms magazine wouldn't hit the streets till March and having the offices burglarised didn't help. Word advertorial magazine Premier reported that a parcel delivery man hadn't realised the intent of the Cross Rhythms office occupants that he had encountered whilst trying to deliver a package of product from Word. He was simply annoyed that nobody wanted to sign for the parcel! v Premier featured among its recommended offerings 'A Portrait Of Christ' by Steve Green, 'Free At Last' by dc Talk, 'Crimson And Blue' by Phil Keaggy and 'Take The City' by Dave Bilbrough. This latter was a bit of a come clean exercise by Hosanna! Music, as some previous "live" praise and worship albums which were specifically aimed at British punters and which featured British worship leaders (notably Noel Richards, Dave Fellingham, Dave Pope, Ian White and Chris Bowater) had been re-dubbed after the American worship leader's voice had been removed! This time, Dave got to fly to Florida. v A precursor of later events in the news items in the February Premier; Adrian Snell had been commissioned to perform at a charity concert organised by The Leprosy Mission at the end of January, with the guest of honour being Diana, Princess of Wales. After her death in 1997, a copy of Adrian's album 'Feed The Hungry Heart' was found in Diana's CD rack. v Meanwhile, in the States, front cover articles in CCM magazine for two acts that are still going strong a decade later, Bryan Duncan and 4Him. Bryan Duncan's latest 'Mercy' had already reached seven on the CCM Update album chart, whilst Messrs Marty Magehee, Kirk Sullivan, Andy Chrisman and Mark Harris had gone two better with 'The Basics Of Life': the title cut is still one of my favourite 4Him songs. v And an interesting festival planned for the Spring Bank Holiday weekend was being organised by The Boys' Brigade. Firm Foundations would take place at Felden Lodge, near Hemel Hempstead, and topping the bill, Randy Stonehill, with support from (amongst others) Dave Pope, Eden Burning, the Remission Choir and Adrian Plass.

Am looking for Adam Again by Michael Omartian on CD , I can't find it anywhere! The album would be O.K. to have also because I can always transfer it over onto a CD