Tim Rice and Andrew Lloyd Webber's hit musical Jesus Christ Superstar was once again the subject of an in depth article in Buzz. The September issue asked, "Superstar - are you who you say you are?", and sought to answer the question by quizzing Larry Norman, who'd seen the show the previous year. Larry pointed out that the production had been plagued by thefts and illness, with rickety scenery and accidents on stage (some had suggested divine retribution), and despite the powerful visual impact of the thing, it was flawed because the Jesus of the show wasn't the Jesus of the Bible. Asked if it was something Christians should avoid going to see, Larry suggested that mature Christians would probably not come to any harm, but new Christians should go and read the Bible instead. As mentioned last issue, Parchment, nÃ©e Trinity Folk, had released the London Festival For Jesus anthem "Light Up The Fire" as a single, and as at mid-September the song had made its way into the Top 40. The album of the same name was due to be released on November 3rd, available through record shops or direct from Key Records, price Â£2.20 plus 15p post and packing. As part of an overview of the UK Christian music scene, Buzz ran an article in October called On The Road For Jesus, showcasing British bands and singers who had gone into full time ministry. 30 years later, some names are still familiar Malcolm & Alwyn, Dave Cooke & Judy Mackenzie, The Advocates, The Glorylanders, Ishmael & Andy and Graham Kendrick. Quote of the month from a report in the October Buzz on the Festival For Jesus event "There's a danger of the Festival becoming .. a sort of public playtime for those Christians who think the greatest Christian experience in the world is to stand in a fountain and shout 'Give us a J .... '." 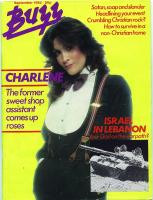 Buzz reported the death of Keith Green at the age of 28 in a plane accident. Keith was killed, along with four other adults and eight children, two of whom were his own, when the aeroplane in which they were all travelling crashed on take off from an airstrip in Woodland Hills, California. Keith's most recent album, 'Songs For The Shepherd', was reviewed in the October issue of Buzz by Tony Cummings, who wrote "... possibly the finest praise and worship LP these ears have heard..." Tony also reviewed the debut release by four young men from Detroit, Messrs Carvin, Marvin, Ronald and Michael Winans. 'Introducing The Winans' contained, according to the Greybearded One, "exquisite ballads, full of harmony (and) supertight production." New in the shops on Kingsway Records, 'Masks', the second offering from a four-person band made up of two married couples, Sue and Steve Bassett and Sharon and Bernie Armstrong, aka New Beginnings. Later in the decade, they would all become more or less involved in the best British Christian band of the '80s, Heartbeat. Other artists with new releases included Noel Paul Stookey of Peter, Paul & Mary fame, whose unique style of music had ministered very powerfully to Tony Cummings at Greenbelt that year; Phil & John (their debut single for Kingsway); Swedish metallers Jerusalem; UK punk rockers The Predators (produced by John Pantry?!); ex-mainstream rock star and later church pastor, Richie Furay; and the aforementioned Heartbeat. Family matters reported in Buzz during September and October; John Pac, ex-Trinity Folk/ Parchment, and at that time with record company Marshalls, had become a dad, thanks to the arrival of son Samuel; and Les Moir (in those days a producer with ICC, nowadays running Survivor Records, became engaged to Judith. Bizarre report of the month was that Gerald Coates, the founder of Pioneer People, had allegedly been buttonholed by someone at Greenbelt who thought that he, Gerald, was Andrew Lloyd Webber ... Don't cry for me, Cobham High Street?

The Greenbelt Festival '92 suffered storms of two very different kinds. Gale force winds ripped through the Castle Ashby site on the Sunday, wrecking tents, blowing down trees, and causing Mainstage to be closed down on advice of the Fire Brigade. Only some 16,000 punters were present over the weekend, a 20 per cent reduction on previous years. However, the big talking point was the controversy surrounding the appearance on Mainstage on Friday night of a "worship rave" event put on by NOS (Nine O'Clock Service), from St Thomas Crooke's, Sheffield. Complaints of New Age content and too much emphasis on sexual imagery came as a surprise to GB organisers, who claimed that they were unable to predict what sort of reaction the event would provoke, as they didn't have any idea what NOS were going to do. This was, of course, not the last time that NOS would cause a furore at Greenbelt... And there was plenty of breast-beating and navel-gazing going on in the USA, not only over Sandi Patty's impending divorce from her husband David Helvering, but also over the allegations of fraud and financial misconduct against comedian and evangelist Mike Warnke. Adding to the sombre mood, Mark Heard's obituary in the October issue noted that Mark's widow Janet faced medical bills of over $300,000 following Mark's hospitalisation after his heart attack at the Cornerstone Festival in July. Coincidentally, Mark's latest and last album 'Satellite Sky' was voted his best ever ... The new album by Michael W Smith, 'Change Your World', was reported to have sold in excess of 420,000 units even before it was officially released. Tony Cummings reviewed the album for Cross Rhythms 12 and used phrases such as "sizzling immediacy" and "superlative production" (courtesy of Smitty and Mark Heimermann) to demonstrate why Reunion Records had managed to shift so much product in so short a time. CCM magazine's reviewer considered it "a supremely fun album .. that you can play for any of your friends." Back on the British scene, Cross Rhythms magazine reported that Neill Forrest, the mandolin virtuoso with Britain's most popular Christian band, folk rockers Eden Burning, was leaving the group. As it turned out, the band were never again to reach the creative high points they found with Mr Forrest.

Was the group New Beginnings really all those years ago ?? Yes, it must have been. I have some video of them performing several songs in the early 80's.