Eight years after its debut, a new look for Buzz magazine, with a new layout, new faces on the team, a new logo and a new name - New Buzz. Part of the re-vamp included recruiting Cliff Richard to write a column, starting with the October edition. In it, Cliff recounted his experiences at Spre-e, when he went incognito to one of the music concerts - I doubt if he could do the same thing at Cross Rhythms... The concert in question was by the Swedish gospel youth choir Choralerna, who had wowed the Earl's Court crowds every night of the week of Spre-e. Founder member Ingegerd Holnberg told New Buzz that they were formed in 1968 and had decided to adopt their black gospel style after a visit to Sweden by a choir from the First Church Of Deliverance, Chicago. The main story in New Buzz for September was about Johnny Cash, on the back of the publication in the UK by Hodder & Stoughton of a book The New Johnny Cash by American author Charles Paul Conn. On May 9, 1971 Cash had gone forward in a meeting at the Evangel Temple, Nashville, and dedicated his life to God. The problem of superstars in church congregations that was to plague later converts such as Bob Dylan had been countered at Evangel Temple via a sign in the church lobby, "Absolutely no autographs or photography in the sanctuary"! Cash and the Evangel Temple Choir had had a worldwide chart hit with the country gospel song "A Thing Called Love" in 1972. Following on from the demise of Ishmael & Andy (see TT, CR75), Myrrh Records had issued a farewell album 'Ready Salted'. Other new UK releases included 'Born Twice' by Randy Stonehill, the whole of the first side of which was an extract from a typical Stonehill US gig; and The Buzz Postal Shopping Service (the 1970s equivalent of Cross Rhythms Direct) was now offering 'Fool's Wisdom' by Malcolm & Alwyn (who were off for a six-month Stateside visit at the end of September), and 'Only Visiting This Planet' by Larry Norman. In New Buzz for October, Dan Wooding reported on the first manifestation in the UK of the phenomenon-to-be that was Come Together. Written by Jimmy and Carol Owens (trivia fact: Jimmy used to be a dance band trumpeter), and featuring Pat Boone as compere and worship leader, the show had been touring selected cities to packed houses, with many turned away at the door. Boone also took the opportunity to testify how he had got it back together in his Christian life through joining Jimmy Owens's church, after nearly losing his marriage and his family due to career pressures and wild living. His four daughters later carved out careers of their own in Christian music, both as a group and individually, particularly Debby, who had a US No 1 pop chart hit in 1977 with "You Light Up My Life". 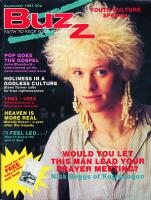 The cover article in Buzz in September homed in on Nick Beggs, the latest mainstream pop star to announce his decision to follow Jesus. The bass player of teen sensations Kajagoogoo, and famous (or notorious) for his nose stud and beaded blond plaits, Nick had received a bit of a rough ride from the tabloid press, almost as rough a ride as many of the music press hacks were want to give the band. In later years, Nick found plenty of opportunities to use his talent on the Christian music scene, most notably as a member of Iona on their 1992 classic 'The Book Of Kells'. The question on the front cover of America's Contemporary Christian Magazine in October, trailing a Cliff Richard article, was "Can a Godly man sing about a devil woman?" It wasn't until the last paragraph of Stuart Henderson's interview that the question was answered, when Cliff told about a letter he'd received from a girl in Australia who was involved in spiritism. A friend had told her to listen to "Devil Woman", and following that, she'd turned her life over to Jesus. Cliff had released an album through EMI in 1982 called 'Now You See Me, Now You Don't', one of the tracks from which was Paul Field's song "Has To Be You, Has To Be Me". Unusually, bearing in mind the usual treatment dished out to British Christian music artists in the USA, the former Nutshell man's 1982 Myrrh album 'Restless Heart' (which contained the composer's cut of the song) had received a belated (and very enthusiastic) review in CCM. Also well reviewed, a five track EP by Welsh rockers The Alarm, soon to tour the USA, and 'Press On', the third album from Joe English, formerly (and briefly) Paul McCartney's drummer. Keith Green had had his top status on the Buzz Contemporary Album Chart taken away by Sheila Walsh, whose album 'Drifting', featured production and harmony vocals by Cliff Richard. In the USA, Amy Grant's album 'Age To Age', having spent a total of 16 months on the chart, was still at No 1. Buzz Album Of The Month for September was 'More Power To Ya' by Petra, and other new projects mentioned included 'One Mind, Two Hearts' from the short-lived London-based soul/ gospel outfit Paradise, who'd impressed many, including Buzz reporter Phil Thomson, at Greenbelt. October Album Of The Month was 'Teach Yourself Praise Guitar' by Joe King, which Tony Cummings declared to be so interesting and useful, it had encouraged him to press on until he could do a passable set of choruses for his church Sunday evening service. We await the Admiral's main stage debut at Cross Rhythms with impatience... .

Thoughts and images of the 1993 Cross Rhythms Festival, Holy Power, filled five pages in issue 17 of Cross Rhythms magazine, published in October. Headed up "Storm Clouds Of Power" (because it rained for the third year straight), the article mentioned some of the highlights of the festival as experienced by punters and organisers alike. Examples: Rick Elias, who, as he launched into a hot axe solo while the rain hammered down outside, quipped "Don't shock me, Lord!"; Kevin Prosch: "[ As I listened to Kevin] I felt a huge excitement inside, and I couldn't stop smiling.."; The World Wide Message Tribe: "Absolutely mind-blowing"; Eden Burning: ".. incredible, joyful folk rock, the crowd went crazy..", and Split Level: ".. truly stupendous." Cross Rhythms 94: Touching Glory had already been pencilled in for July 8-10 the following year. Greenbelt 93 had been considered a great success, according to organisers, although the attendance of 17,000 was a tad disappointing, seeing as Cliff Richard had been there to help celebrate the festival's 20th birthday. To compensate for the non-appearance of such acts as Pray For Rain and Out Of The Grey, dc Talk had been a late addition to the bill, but most were agreed that the highlights were provided by Eden Burning, who seemed to have attracted the majority of those present to their mainstage set, and Julie Miller, who was assisted by husband Buddy, with Sammy Horner and The Electrics as the rhythm section. Lots of news was reported in Cross Rhythms magazine of bands and artists coming and going, including the demise of Bristol's finest thrash metallers Detritus; Michael Card was reported as having been booked to star in a Christmas show at the London Palladium; 'Fields Keep Calling', the debut CD of Midlands roots maestros Nuffsed, featuring guest appearances by David Fitzgerald, Neil Forrest (ex-Eden Burning) and Mike Stanley, and many song lyrics by Tony Cummings; and the passing of Moses Dillard, who had won a Grammy and a Dove in 1982 as producer of Al Green's classic gospel album 'Precious Lord'. Meanwhile in the States, Rich Mullins was putting the finishing touches to what was arguably his masterpiece, 'A Liturgy, A Legacy And A Ragamuffin Band'. Backed by Jimmy A, Rick Elias, Beaker and Billy Crockett amongst others, Rich explained that liturgy was something we submit to, so it can shape us; legacy gives us our perspective. And the ragamuffin bit? That was borrowed from Brennan Manning's book "The Ragamuffin Gospel", which was due for a reprint, with a new foreword by none other than Rich himself. Quote Of The Month from Steve Taylor: the Clown Prince of CCM was in Vietnam, shooting video footage on a worldwide trip, when he sent a postcard home saying "Wish you were here, but then I'd be over budget." Steve's new album 'Squint' was due out in the USA in November. And talking of new releases, The World Wide Message Tribe's 'Take A Long Hike With The Chosen Few' (described by CCM Magazine as "kickin'", and "a funky mix of house, techno, rap and rave") had been let loose in the States by Scott Blackwell's N-Soul label.

I remember this magazine 'Buzz' from many years ago...Can you still get this paper?
I am going down memory lane tonight and it's wonderful.All because I have bought a record player and started to play my gospel records from yeras gone by.I think my lord is trying to tell me something. As I have lost my way for the past year.but slowly finding the light once again. x

I am trying to find Lars the coir leader of Choralerna in Sweden, can you help me? Thanks