A full page feature in the November issue of New Buzz quizzed Graham Kendrick, to find out if there was any truth in the popular opinion that the life of a full-time Christian "folk singer" must be a bed of roses. The 23 year old Mr Kendrick, by then a veteran of two albums, countless gigs and thousands of motoring miles, spoke at length about the need to learn to worship, a subject which he has explored on many occasions in the years since. One quote on the topic: "There is a vast difference between a sing-a-long and worship." He also promised that his next album would be "less orchestral." He kept his promise: the followup to 'Bright Side Up' was the classic 'Paid On The Nail'. ... The by now traditional annual MGO-organised gospel music concert Start The New Year With Jesus had been pencilled in at the Royal Albert Hall for Saturday January 5, 1974, with featured acts to be Malcolm & Alwyn, Swedish gospel choir Choralerna, Yugoslavian-born Aleksander John, North Country pop rockers Canaan, and Wales's Kevin Gould who had recently had a single in the record shops (see Time Tunnels, CR 75). Prices were a very reasonable 40p standing (as per the Proms) to Â£1.50 for the posh seats. Choralerna, who had been the sensation of Spre-e 73 (see Time Tunnels, CR 76), had also lined up a four-date lightning tour to go with the Albert Hall gig, along with a studio session to cut a new album, their first recordings outside Sweden. ... Talking of Malcolm & Alwyn, the Sutton-in-Ashfield folkies had released 'Fool's Wisdom' in the USA through Word Records and had shifted 5000 copies in six weeks, pretty awesome for a virtually unknown act. However, the lads were remedying the "unknown" thing by spending six months touring the USA with their wives and families and gigging as hard as they could wherever they went. ... News of a happy event for Ian and Irene Smale (aka Mr and Mrs Ishmael), the safe arrival of baby Joseph Gideon. Following the demise of Ishmael & Andy at the end of a 16 date tour by the British Youth For Christ Roadshow, which also featured Kevin Gould and The Advocates, Ish had enrolled at the Elim Bible College. 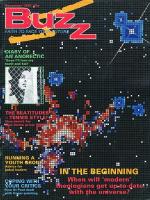 In the September issue of Buzz, editor Stuart Goddard and assistant editor Tony Cummings had quizzed John Blanchard about Pop Goes The Gospel, the book Blanchard had coauthored on the topic of whether or not contemporary Christian music was a suitable means of conveying the Gospel message; he and his fellow authors had concluded that it was not. Feedback in the letters column was immediately forthcoming; opinions expressed ranged from condemning Buzz for publishing a piece of "shoddy Christian journalism", to a heartfelt plea from Martyn Joseph, who wrote urging the authors of the book to take another look, because he had witnessed God changing lives through his (God's) great gift of music. Perhaps a more sardonic opinion of the book was reported in the Briefs column in Buzz, where "St Michael" told us that it was on sale at the Filey Bible Week bookstall under the category of Fiction! ... The release of the first album by Phil & John, 'Count Me Out', was accompanied by a feature article in November's Buzz entitled Working Class Heroes, with the by-line "Phil & John have played Greenbelt, but are more committed to the blackboard jungle of schools evangelism." Greatly influenced by Malcolm & Alwyn (hardly surprising, since they all come from the same part of Nottinghamshire) as well as Charles Wesley (according to John), the Mansfield folkies had just finished their first year full time as associate evangelists with Youth For Christ in Derby. ... Albums Of The Month in Buzz for November were 'Voice' by The Barratt Band ("bold and classy and never gives you a moment's peace", wrote Adrian Snell's future lyricist Phil Thomson), and Steve Taylor's debut minialbum 'I Want To Be A Clone', described by Tony Cummings as "the most exciting and radically prophetic recording the rock 'n' roll subculture has so far presented to the Church." Appropriately, December's Album Of The Month was Amy Grant's 'A Christmas Album'. Buzz also ran a feature mentioning some Christians with new mainstream releases, including Dion, Donna Summer, Philip Bailey, Paradise, Kajagoogoo, The Alarm and David Grant.

Plenty of big names were featured in the 18th issue of Cross Rhythms magazine, published in December, including Phil Keaggy, whose latest album 'Crimson And Blue' had just hit the UK, David Meece, The Winans, with a sideline article on Angie & Debbie, Helen Baylor and The Brooklyn Tabernacle Choir. Pick Of The Pile in the reviews section was 'Mukti Dil-Aye: He Saves', a fusion of Eastern and Western music overseen by South Asian Concern, featuring Kevin Prosch, Bryn Haworth, Nick Beggs, David Fitzgerald, Terl Bryant and David Grant and produced by Martin Smith, described by Tony Cummings as an "exciting new discovery." Elsewhere in the reviews section was a Cummings review of Martin's first Cutting Edge tape, "six exquisitely crafted worship songs," quoth The Greybearded One. The Cutting Edge Band would in a few years' time metamorphose into Delirious? and the rest (as they say) is history. ... The festival season may have finished for another year but Soul Survivor were quick off the mark with a hand out plugging the 1994 event, with plenty of big name speakers and music promised from Bryn Haworth, Iona, 65 dBA, The Wades, Kevin Prosch, Matt Redman, The Funky Beehive and The Pink Dandelions. And the organisers of the first Roots & Branches Festival, held in the West Midlands on October 2, pronounced it a success; despite a rather disappointing attendance, the atmosphere more than made up for it. Those appearing included Nuffsed, Eden Burning and Jonathan Day & Eye Of The Storm. ... Slightly Bizarre News Item Of The Month: a project called Roller Gospel kicked off in London. Featuring roller skating to Christian music, the fortnightly event would showcase Christian DJ The Vinyl Preacher and special guests including Marvin Sapp of Commissioned and Vicki Winans. ... CCM magazine's main features for November and December were an in-depth profile of Texan singer/songwriter Al Denson, who had just released his fourth album 'Reasons' for Benson Records; and a big splash on 'Young Messiah', described as "the (re)making of a contemporary classic" (methinks George Frederick Handel might well be rotating in his grave). ... Hot on the heels of the release of his classic 'A Liturgy, A Legacy And A Ragamuffin Band' (Reunion Records' publicity blurb described it as "a new album that's very Rich"!), Rich Mullins was quizzed in the December issue of CCM. Always ready with a quotable quote, Rich was on his usual good form: "The amazing thing about the whole joy of Christianity is, it's something you can't find, it's something that has to find you."

Hi Trevor,
I would be very interested to know if UK gospel-funk band Clarity (1980's) ever recorded.