Lead article in the January issue of New Buzz was an in-depth interview with the northern based folk trio Parchment, still best remembered for "Light Up The Fire" reaching number 31 in the UK pop charts. However, Sue McLellan and John Paculabo admitted that, because they had had a hit single, people thought that they were rather more professional than they actually were. Their New Year resolution, with new member Jeff Crow on board to replace the departed Keith Ryecroft, was to work much harder to improve musically and in their concert presentation and to let God take care of the rest. - "The biggest problem I face as a Christian in show business is not so much what I believe, but being able to live up to what I believe;" the first lines of a full page New Buzz interview in February of country music legend George Hamilton IV. George had recently moved from Nashville back to his Bible-belt roots, to his home state of North Carolina, taking up residence in Charlotte, which just happens to be the birthplace of Billy Graham. George was positive about the Jesus Revolution, but fed up with all the emphasis on the seamier side of life. One verse of Scripture that always helped him to make it through was Philippians 4:8: "Whatsoever things are good, whatsoever things are pure, whatsoever things are true, think on these things." - The review page in the January issue of New Buzz included a review of 'New World', the latest release by the Edwin Hawkins Singers. Things hadn't gone well since the "Oh Happy Day" smash of 1969, the choir complement was down to seven voices (more like Blue Mink at times, in the opinion of the reviewer), and it seemed that much of their "blackness" and their soul had been taken away. - New Buzz's celebrity columnist Cliff Richard had been in action on the football field and the man had the photos to prove it. Despite a bad back, a nasty cough and an upset stomach, he had turned out as a substitute for a Buzz All Star team, which included well known Christian singers Len Magee, Kevin Gould and Garth Hewitt, versus the Swedish gospel choir Choralerna. However, not long after coming on at the start of the second half, Cliff was involved in a shirt-pulling incident with Choralerna captain Albert Sandberg, and was sent off. - Finally, Buzz contained an intriguing news item on one time member of the 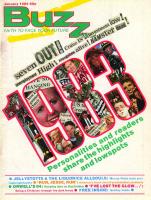 Retrospectives for the old year, both serious and silly, decked the pages of Buzz and Contemporary Christian Music magazine in January. Petra were declared the best-selling Christian rock band ever, with their album 'More Power To Ya' racking up a continuous top five spot in the CCM album chart for over 11 months, and Amy Grant's hyper-mega selling album 'Age To Age' had gone gold, with half a million units sold, and was still solidly at number one in the CCM album chart after nearly two years. Encouragingly for British Christian music followers, a "best of 1983" album review in the January issue of CCM placed Sheila Walsh's 'War Of Love' at number six. From a UK perspective, best and worst of the year in the opinion of a variety of contributors included, in the "best" category, Cliff Richard ("-.[his 25 years in show biz is] encouraging for pensioners who think life ends with old age", according to Tina Heath, ex-Blue Peter presenter and wife of Dave "Better Than I Know Myself" Cooke), and in the "worst" category, the tragic demise of Phil & John's pet hamster Albert. - John Pantry ended 1983 at number one on the Buzz album chart with 'It's For You', closely followed by 'Drifting' by Sheila Walsh, and Amy Grant's 'A Christmas Album'. However, during January, Keith Green's 'Songs For The Shepherd' regained the top spot after falling to number six, and 'More Than A Feelin'' by Koinonia, Tony Cummings' Album Of The Month, came straight in at number two. Quoth the Greybearded One, "Koinonia are the sessionseasoned cream - [this is] invigoratingly joyful music". For February, Tony selected the Mark Williamson Band's Myrrh release 'Missing In Action', featuring a very youthful looking, but by then vastly experienced, Chris Eaton. - Other news from the States recorded the demise of Marty McCall's band Fireworks; he would have a few years as a solo artist before forming First Call with Bonnie Keen and Melodie Tunney in 1985 -. and soul stars James Ingram and Michael MacDonald had released "Yah Mo B There", described as "a song of encouragement in the Lord"; the cut was receiving Christian radio airplay as well as on Top 40 stations. Eventually the song would be released in the UK, making number 11 in the singles charts in January 1985.

Detroit gospel legends The Winans were the cover artists on the December/January Cross Rhythms. In the feature Carvin Winans spoke about the Winans getting criticised for working with mainstream (non-Christian) pop and R&B stars. He said, "It's flattering to know that these artists have respect for what we do and sing about-" In the same issue there was an article on Angie & Debbie Winans, recently signed to Capitol Records; the latest act with a release on Sticky Music, Glaswegian alt rock team Calvin's Dream; an interview with CCM veteran David Meece; a piece on the Wades, whose anti drugs single "Get Off That" had recently been released; and a lengthy piece on CCM pioneer and guitar virtuoso Phil Keaggy. (shape) Plenty of news about, with pride of place going to the announcement of the first ever National Day Of Prayer And Fasting For Christian Music set for 22nd January. The idea for the initiative came from British gospel stalwarts Marcia Dixon and Juliet Fletcher. - Other news included the announcement that hugely popular folk rock team Eden Burning were recording their new album in January, that Carman had recently enjoyed the biggest ever attendance for a solo Christian music concert with over 50,000 people seeing him play the Music For Peace concert in Johannesburg and that rap stalwarts Run DMC were to be one of the special guests on the new Commissioned album. - Grassroots artists were, encouragingly, beginning to advertise their wares in Cross Rhythms. Heavy metal band Gethsemane Rose, with their memorable bi-line "It's nice and it sure ain't pretty-", were toting their newly recorded album 'Tattered 'n' Torn' while Barrow's alt rock band Pity The Small Thumbs were toting for gigs and advertising their EPs 'Stumbling' and 'Magic Balloon Man'. - Amongst the more esoteric items in Cross Rhythms was a survey on the Christian music scene in Belgium which praised such indigenous CCM acts as Solid, Angie C and Adri van den Berk and a feature, in its The Living Composers Society series on Polish purveyor of the avant garde and neoromanticism Krzysztof Penderecki. - Pick of the pile in Cross Rhythms album reviews was Asia Worships 'Mukti Dil-Aye'. Coordinated by South Asian Concern, the album fused Western and Asian music and was produced by a, then unknown, Martin Smith.