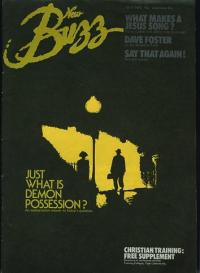 "What makes a song a Jesus song?" asked New Buzz in its May issue, highlighting what it considered to be an increasing difficulty in differentiating between Jesus music and music about Jesus. The article looked at some of the mainstream music makers who had produced such material, including Kris Kristofferson, Billy Preston and Bob Dylan. Kristofferson had written his hit country song "Why Me Lord" after his first visit to a church in some 30 years; Preston, in spite of his well-documented personal lifestyle problems, talked about how he wanted his music to show people truth and find a new way of life. Dylan's rediscovery of his Jewish heritage had started him on his search for answers; his mother was quoted as saying that, of all the books he had in his house, the Bible was the one that received the most attention. Always available for a quote, Larry Norman had the last word - in his opinion, Jesus music was anything that accepted Jesus for what he said he was, the Saviour, and not something that mentioned his name because it was in fashion. ... The latest recruit to the ranks of Christians in mainstream music was Wanda Jackson, who'd had a couple of Top 50 chart entries in the UK in the early 1960s, but who later carved a niche for herself in her native USA through country music. In spite of a tendency amongst US country artists to record gospel music, Wanda had refused, being quoted as saying, "How can I sing about a person that I do not know?" However, after her Capitol Records contract ended in 1973, she had signed a new deal with Word Records. ... With more Christian music releases in the shops, the review content of New Buzz was also increasing. One that grabbed the reviewer's attention in May was 'Laughter In Your Soul', the debut release by Jamie Owens, daughter of Jimmy and Carol of Come Together fame, with "interesting and well balanced" production and arrangements. Also reviewed was 'Help It Along', the latest from Cliff Richard, a live album based on his gospel concert set, with "production and orchestration superb throughout"; the royalties from the album were destined for TEAR Fund. Other interesting albums new in the shops included Dave Cooke And Judy Mackenzie's offering 'Thinking It Over'; no less than six albums featuring Pat Boone, including the definitive recording of 'Come Together'. 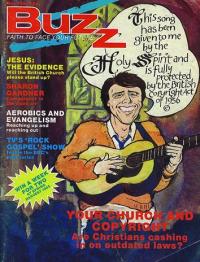 A topic that had been given a good airing in New Buzz in 1974 resurfaced 10 years later (although really it had never gone away) - the question of copyright. Basically, if anyone creates anything that is "the product of intellectual endeavour", be it song, novel or play or whatever, then that person owns it under law, and is the only one who has a right to copy it, hence the word copyright. In 1974, it was the copying of vinyl albums onto cassette; in 1984, it was the new-fangled overhead projectors that were appearing in churches, and the sort of things that were being displayed on them. Tony Cummings' article in the May issue of Buzz accepted that getting permission from copyright owners to reproduce copyright material on OHP or song sheet was a laborious task, and consequently many ignored the law, much as the illegal tapers had in the 1970s. Also, those who declared that they did ignore the law quoted Scripture as justification, which was vigorously countered by artists such as Graham Kendrick and organisations such as Kingsway, who asserted that the law existed to safeguard people's legitimate rights. Although Kingsway had begun to issue acetate packs for the most popular songs, these were expensive and the problem wasn't really solved until the creation of Christian Copyright Licensing International (CCLI). ... Buzz reported in the May issue that the phenomenon of Christian aerobics, rhythmic exercise to Christian music, had arrived at Spring Harvest, via Sue Barnett, trained PE teacher and wife of evangelist and regular Buzz contributor Doug Barnett. Sue had joined the ranks of those who had produced what Tony 'Fat Stuff' Cummings had dubbed aerobic vinyl, and Tony reported that Sue's 'Fit For Life' programme was quite gentle and user-friendly. This was in contrast to some of the offerings from the States (one album was described as "a series of non-stop exercises which could only be realistically undertaken by the super-fit or the suicidally inclined"!). ... Getting on to more conventional music matters, Buzz's Album Of The Month for May was 'Triumph In The Air' from Sheila Walsh (in the words of Tony Cummings, "a talent that the whole Christian arts community in Britain can be proud of"). In June, the accolade went to the self-titled album from New Beginnings, Steve and Sue Bassett and Bernie and Sharon Armstrong, some of whom would be involved later in the decade with Heartbeat and who offered catchy synth pop. ... 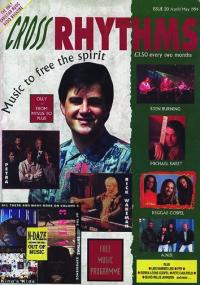 The ministry behind From Minus To Plus which Cross Rhythms described as possibly the most ambitious evangelistic initiative ever undertaken in Britain had been overseen by South African worship leader, Bible teacher and gospel singer Oliver Raper, at that time recording as Olly. Way back in the 1970s, Oliver had been a member of the singing trio Rufaro, along with his sister and brother-inlaw, and whilst plying their trade in the UK in 1981, Rufaro were asked to sing at a crusade in Birmingham, at which the preacher was the then unknown evangelist Reinhard Bonnke. When the other members of Rufaro decided to return home, Olly stayed in the UK and set up the British office of Reinhard's organisation, Christ For All Nations, and the initiative was to supply every household in Britain with a Scripturebased booklet From Minus To Plus. As if he wasn't busy enough, Olly had also released his fifth solo album 'Heart And Soul' on Rob Andrews' Chapel Lane label. ... Roots Rhythm & Redemption, the 21st year celebrations of Greenbelt, due to happen on the August Bank Holiday weekend at Deene Park, Corby, was to be graced by the presence of the Clown Prince of CCM, Steve Taylor, fresh from the critical acclaim of his latest album 'Squint', gospel legends The Original Five Blind Boys Of Alabama, and guitar maestro Phil Keaggy, as well as home grown talent in the shape of Martyn Joseph, Bryn Haworth, Iona's Wild Goose Worship Group and Glasgow's Late Late Service. ... A grand total of 105 albums had been reviewed for the 20th issue of Cross Rhythms magazine; Pick Of The Pile was a truly stunning album of (to quote Tony Cummings' review) "songs that are going to heal nations, songs that will break the powers of darkness, songs that will spearhead the Holy Spirit revival". The creator of this 10 square album was Hawaii-based worship leader Bob Fitts, the title 'Proclaim His Power'. And a Pick Of the Pile CD from the previous year, Adrian Snell and Phil Thomson's musical 'Beautiful. Or What!?' featuring Adrian and Caroline Bonnett, was due on a European tour, encompassing Switzerland, France, Holland, Germany and a special performance on the Saturday of the Cross Rhythms Festival, Touching Glory. ... In the Sidelong Glance feature in Cross Rhythms, a piece about a bizarre item of apparel that later inspired a tune. The Midlandsbased roots musician Mike Stanley, a good friend of the Black Country roots band Nuffsed, had bought a pair of multi-coloured pantaloons which became immortilised in Nuffsed's "Mr Stanley's Amazing Trousers". ...