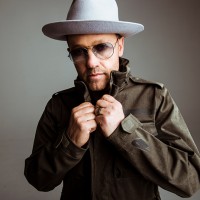 Mike: What got you back into doing hip-hop?

Toby: I looked up and said, "You know what, when I listen to 'Supernatural' versus 'Jesus Freak' or 'Free At Last' or even earlier than that, there's just that missing element of hip-hop, a culture, a lifestyle that I really love and grew up in." It's just missing on 'Supernatural' and it's just a hole and I then had the desire to fill it. It wasn't that Kevin and Michael are making records that I should too, it truly was the absence of hip-hop in my life and in my art.

Toby: Yeah. I think a lot of opportunities came at the same time, it was weird. Several groups came and asked me to guest and I just did what I do and it was cool. You know I would normally have shied away from those things. I thought it might be cool to get the opportunity to do those things I always wanted to do as far as collaborating with people but I haven't had the time because of dc Talk and living on the road and having a family, so it was nice.

Mike: Working solo, did you miss Michael and Kevin because there's even more responsibility on your shoulders?

Toby: Definitely. Michael and Kevin are like having a vocal bazooka in both hands. I don't have Michael's huge voice or Kevin's intense melodic voice. Those aren't part of my arsenal as a solo artist Just the same as my cadence and my rhythmic tones and speaking aren't part of their arsenal and I think each of us may be feeling it slightly. But at the same time it's like the recipe revealed to dc Talk are these ingredients that make a dc Talk record. And I think each guy has longed not to have to be diplomatic, not have to be a democracy where everybody decides what is best. I'm not saying that I'm not leading it, sometimes I wish I wasn't but nonetheless I am. Believe me, every decision is run by Mike and Kevin. They have a say in it, so for once we can follow the beat of our heart and hopefully God is playing a major role in that. If not, I think we need to reassess what we're doing.

Mike: It marks a return to hip-hop for you so what was that like?

Toby: I'm kind of battling within myself because I really do want to make some more organic type experimental hip-hop. Maybe more along the lines of our 'Erace' record that we put out a few years ago, that I can take to smaller settings. Side stages at festivals, coffee houses, clubs -1 really do want to get back to those type of elements and I miss that. dc Talk didn't get to experience that for very long and it's something I want to do. Setting up there with the bass player and the acoustic guitarist, maybe a cellist and a groove and do some hip-hop tracks and they're a little more stripped down and organic. I think people know what I love to do and know the sound that I love and the sound that I grew up with. Maybe I'm being naive, maybe people jumped on board at 'Supernatural' and they might not know, but I think most people will know.

Mike: Why launch the band's solo records with an EP?

Toby: The EP is sort of a flag, it's throwing up a flag saying, you know, we're going to support one another. Whether we're together making music or whether we're not, I wanted the next dc Talk record to be four solo songs by Kevin, four by me and four by Mike. We still see that as dc Talk. I mean dc Talk is totally Michael and Kevin, it's our friendships and it's the art that comes out of those friendships. To me that would be a dc Talk record, I don't think the record company saw that as such but never mind.

Mike: Are you embarrassed by some of the earlier rap tracks you recorded?

Toby: There was a period about five years ago when I was embarrassed but now I think you mature a little and you go, "Well that's where it was then." It wasn't hardcore by any means. I always wanted to mix melody with rap and I always wanted my rap to be fairly friendly but it was definitely cutting edge for where we were and when I listen back, it's not embarrassing, it's just kinda cute.

Mike: What about ministry? Where does that fit in to where you are as a solo artist?

Toby: For me I can't avoid what's on my heart and that is to share the good news that has been imparted to me. I consider myself very much an artist and very much a guy that wants to develop Christian music so I guess a businessman too. I have both sides, and I do feel like I want to move the whole machine forward, the whole artistry meeting spirituality. Art meeting Christ, I want to move that forward and by every means necessary. But at the end of the day the calling in my life is evangelism and that's a hard pill to swallow because it doesn't sound very artistic. But at the end of the day I have to acknowledge that that is the calling of my life. Every song I write and every concert that I do, it's very difficult. I mean it takes force to not get me at some moment to share what Jesus means to me or share his principles with the audience or the listener. I'm not trying to force it in there, I don't feel like I have to. But there's just that need in me to do that.