ToddZero: The LA-based electronica man who deals in painful transparency

Tony Cummings reports on TODDZERO, a singer/songwriter prepared to sing about his "Precious Limp" 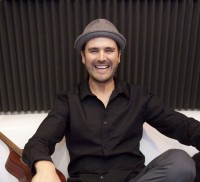 ToddZero is an electronica-style songsmith who, right from the off, received Cross Rhythms radio play. His debut mini-album, when he was recording as Todd0, produced two CR radio hits -"Hallelujah Chorus" and "No More In Heaven" - and since then his 'Kid Heart' album has brought him critical acclaim. But it's his latest album 'My Precious Limp' which demonstrates that this Los Angeles native is one of the best, and most transparently honest, of the new wave of singer/songwriters currently plying their trade on the Internet.

Todd was born Todd Olivas in LA on 17th August 1971. Like millions of other kids Todd grew up listening to music on the radio. The first song which caught his imagination was Glen Campbell's "Like A Rhinestone Cowboy". He explained, "Something about the lyrics and melody made me want to sing along." He took a few guitar lessons and played "in a million bands which then played in a million small venues." But then music was put on the backburner. On his website Todd wrote honestly about what followed. "I was raised Christian. Then I rebelled. I got married way too young and things were fine for a few years but after awhile due to a stubborn and hard heart towards God and my wife, I 'fell'. For me that meant a shameful affair which lead to a divorce. That lead to a lifestyle of sowing my wild oats and doing whatever I wanted. During that time, I even slept with my friend's wife. More shame. More distance from God. Cue the partying, experimenting with drugs and debauchery. Cue the car being repossessed, the credit score in the 500s, and the dingy one-bedroom apartment behind a fast food restaurant with only a mattress on the floor and my clothes in trash bags. Fortunately - indeed, very fortunately - I lost everything. So in 2003 I crawled back to Christ where I got a second chance."

In 2010 Todd began collaborating with a friend who owned recording equipment. The songsmith explained, "It was fun at first, but then the bug bit me. What started out as merely a hobby turned into a full-blown calling." Immersing himself in the recording process Todd bought his own recording equipment and learned how to self-engineer. In 2012 Todd released the '1234567' mini-album. He remembered wondering, "Amidst the sea of music out there who would care that yet another dreamer was writing songs?" As it turned out quite a few people. Cross Rhythms gave it an enthusiastic review and airplay, Alpha Omega News pronounced it "Grade A" and it appeared on NoiseTrade.com's New & Notable homepage. Dozens of radio stations added the single "Freedom In You" to their playlists.

Building on the buzz generated by '1234567' Todd returned to his Los Angeles studio to write, record and produce the bulk of his first full-length album, 'Kid Heart', which was released on 4th June 2013. Said Todd, "The first half of 'Kid Heart' is a collection of deeply personal songs while the second half is a concept album that followed the narrative of the final week of Christ's life from the triumphal entry all the way to the resurrection." The album got enthusiastic reviews and again plenty of airplay. But for his next project Todd decided to go deeper still. He wrote, "When I sat down to write this third album, I had a choice. I could very easily have stuck to my usual song themes: innocence lost ala 'Kid Heart' songs, New Testament inspired narratives like "When Love Comes Riding By (Hosanna)" or "We Will Win" triumphant songs designed to get the heart pumping, the stadium cheering (in theory), etc, etc. But something about going that route seemed like a lost opportunity. An opportunity to tell the truth. The real truth about what I've been feeling. And when I say 'I', I mean Todd, the middle-aged father of two, on his second business, second marriage, and on his second lease on life - not ToddZero the wannabe rock star playing the sweaty Viper Room on the Sunset Strip or Austin, Texas' SXSW wearing (barely) fitting skinny jeans."

Todd continued, "There's a lot of wreckage in my story. And most if not all of it was self-inflicted. There's a million songs out there about being the person who was 'done wrong.' But very few songs from the perspective of the person who did all that wrong. So that's what I decided to write about. On 'My Precious Limp' there are 12 songs about my journey of how during my 20s I threw everything away and generally lived a base, self-loathing existence as far away from my moral, Christian upbringing as you can imagine. If you do it right, facing those kinds of ugly truths about yourself is both brutally humiliating and painful but also freeing. I think it was Jesus who said, 'Then you will know the truth, and the truth will set you free.' Opening up about major character defects and lies from your past is not for the faint of heart. Along the way I wrote songs with not-so-subtle titles like 'I Knew That I'd Get Caught', 'My Best Friend Wants To Kill Me' and 'Yeah, I Lied About It'.

"There's no real way to atone for all the destruction I caused. It's not like a fender bender where you can repair the damage and make the other person 'whole'. You can't write a cheque or do jail time to pay this type of debt. Even an album of 12 'I'm ashamed and sorry' songs is meagre recompense. Speaking of. . . I wrote a song called 'Sorry Is A Stupid Word' with exactly this helplessness in mind: 'There's one thing that I am sure/And I know it's not a lot/Sorry's stupid but it's all that I got.' It's now 2016. About 15 or 16 years have elapsed since I made all those horrible character choices. And on this side of things, having become a prodigal son of sorts, having miraculously received the forgiveness of both my ex-wife and ex-best friend, I have a new perspective on what grace - real world grace - looks like. To me it looks like this: more blessings and less justice than I ever deserved. Songs spring from this. For songs like 'Glory Glory Glory' and 'The End Of The World' I wrote lyrics like: 'Your love's enough at the end of the world/Fear forever was my home, my bed of thorns/But love's my shelter I have learned/At the end of the world." Through it all, I have learned a number of things. First, there are certain things one can do that can never be undone. Tread lightly. My pastor says we are all just one or two bad decisions away from destroying everything. He's right. I speak from experience. So stay close and stay clean. Close to God; clean in your heart.

"Second, certain things will never be 'okay' or 'fine'. The knife in the back may have been removed, the wound may not be an open bleeder any more, but there will always be a scar. Always. It's my job now and forevermore to live with the realisation that I caused that scar on another person. It takes a certain amount of faith, I'm finding out, to not allow self-condemnation to sabotage my own healing. It really does nobody any good if I just retreat under a pile of shame. Which leads me to point number three. . . Since there's no way to pay this debt back, the next best thing I can do is simply get better. Be better. Be a better father, husband and human being. As I mentioned, I have been on this 'better' path for a decade and a half. So how about another decade? Then another one after that. This thought inspired the lyrics to 'Time': 'Seven billion branches on God's family tree/So there's a good chance my son will turn out like me/Wish there was something that I could do for you/But there is nothing except maybe improve (and soon).'

"Finally, I've learned that forgiveness is the best gift one human being can offer another. I am the grateful recipient of that gift from at least two people who I hurt. And I'm still astonished and grateful for it each and every day."