Todd Agnew: The Texan singer / songwriter studying for a PHD

When Cross Rhythms last reported on Todd Agnew he was about to release his 2009 album 'Need'. The Texas-born singer/songwriter had come a long, long way since his first album, 'Grace Like Rain'. That album of songs largely emanating from a students' Bible study he helped run at Germantown Baptist Church in Memphis had led to recording, touring and critical acclaim. The 2003 debut was a big seller in Christian retail while his retelling of the Christmas story 'Do You See What I See' in 2006 was nominated for a Dove Award while his 2007 'Better Questions' album featured a US Christian radio hit with "Our Great God" - a duet with CCM artist Rebecca St James. But Agnew's career wasn't to go in the direction the Nashville CCM industry had marked out for him. He married, relocated back to Texas and immersed himself in theological study and preaching and teaching engagements. With the release in May this year of the album 'From Grace To Glory: The Music Of Todd Agnew' demonstrated this most gifted of songsmiths has not complete abandoned music making. Alongside a selection of old recordings there are two new songs - a theologically rich hymn "Glory To Our Great Redeemer" and the reflective "Nearer Home". Todd spoke to Cross Rhythms about an album which is a neat capsule history of the 14 years recording history of an eclectic music maker.

Tony: How did you become such a musical eclectic?

Todd: I didn't start out doing it intentionally. I always tell people that I never listened to pop music growing up. I kind of hung out in the garage with my Dad listening to national public radio. There would be an hour long show that was folk music and then an hour long show that was blues music then an hour long show that was something else. So I grew up with all these different influences and I loved a lot of different kinds of music. And then when I got to writing I realised that I still loved all those kinds of music and so I kept developing skills that let me play in different genres and write in different genres. And yeah, I have always intentionally pursued that just out of a love for music. At this point in my life, I sometimes wish I had just chosen one of them and got really good at it. Cos I look at my friends - I look at Andrew Peterson. He's such a craftsman. His songs are beautiful. I know that I can't do that. I accidentally will do it every once in a while. But I can't just sit down and do narrative. But I can do a lot of things that some people can't which is switch from genre to genre depending on what I feel that song needs.

Tony: Parts of the music industry states eclecticism doesn't sell. Have you ever come across such an idea?

Todd: Yeah, it's definitely there. I've seen it a lot. I was really fortunate that as my career started the person who brought me in was Dana Key. He was an artist himself and he was in a rock band but he grew up in Memphis playing blues and had multiple influences. Then he brought me into the Ardent team and every one of the Ardent guys are either an artist or an engineer. So they have been so encouraging to me because, yes, I think if I'd been anywhere else they would have found the thing that sold and the rest of my career could have been 'here's ten more songs that sound like that!'

Tony: Now, tell me about the acoustic song, "The One You Want". Is that a new one or is it on a previous album?

Todd: It's on a previous album. It was actually on the record right before this one, 'How To Be Loved'. 'From Grace To Glory' goes from now backwards. It starts with the two new songs and then goes all the way back to 'Grace Like Rain'. So it's kind of how we built it so that it told the story, even though it told it backwards. "The One You Want" is a song I co-wrote with Jason Ingram. Jason co-writes about half the stuff in Christian music right now. He's a wonderful writer in Nashville. 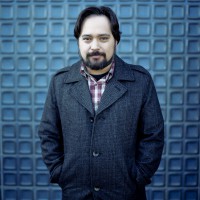 Tony: Now, people are already saying - I've read one review that stated "Glory To Our Great Redeemer" is a "new Agnew classic", to use their phrase. Have you seen any signs yet that it's going to connect with congregations?

Todd: I don't know. I know that my church likes to sing it, so that's somewhat helpful. Obviously, there is really only one Agnew classic and that was "Grace Like Rain" and when I took that song, people latched onto it immediately. And "Glory To Our Great Redeemer" honestly, I wish it was exactly the same thing but it's not like that. Instead, it's really rich and deep theologically. And so the first time people hear it, I think they're more engaging with the truth of what's going on. So it works best not in a concert setting. It can work in church, where you can sit and wrestle with those things; where you can sing the song week after week and come back to it and let it grow in meaning and let you engage with God on your gratitude for what he has done for you. And in that environment I think it is working.

Tony: Is that a song you could have written before you went to seminary?

Todd: Well, no. I mean yes, I could have written the words. I knew all these things; they weren't new ideas for me but what had happened for me was I had read a book years ago and he brought up this idea of why we use so many metaphors for what happens in salvation. You know, we say that we are redeemed, that we are ransomed, that we are rescued, that we are pardoned, that we are forgiven, we are justified. He's like, so, which one is it? Which one of these things really happened and why do we use all the rest of them? And it really bothered me. It wasn't that I minded him asking the questions; it was that I didn't know the answer. Which one of these really did happen and why do we describe it in so many ways? And I've thought about that for years. So when I started working on this song a couple of years ago, I wrote those first four lines: "Glory to our great redeemer/Spotless Lamb for sinners slain/My pardon purchased, my ransom paid/Glory, glory to his name." I finished the first four lines and had already used four different metaphors for salvation. Which one of 'em's right? I was kind of paralysed so I put the song to the side 'cos I thought I don't think I'm ready to write this yet. But in seminary I took a class on soteriology, the doctrine of salvation, and I had an assignment where I had to go through the Bible and study all these passages and I realised that we use so many metaphors because God uses so many metaphors.

What happened in salvation, what happened at the cross was not this one simple act that we could understand with one metaphor. It's this rich, deep thing. So God continues to use different words and paints in different ways to start helping us understand the bigger picture. Galatians says that we are redeemed and adopted; 1st Corinthians says we are washed, we are sanctified, we are justified; Romans says we are reconciled and we were saved; 1st Peter says we are born again and we are heirs. All those things are true and that's only four verses of the Bible. God paints that same picture over and over with different language and different vocabulary, using all these metaphors to say, hey, look, I want to help you understand what I've done for you. Once I understood that it wasn't us trying to describe God, and we're falling short in our words, it's God describing what he has done, knowing our vocabulary was limited so he painted with different brushes, over and over in different colours and made this huge beautiful painting for us. I'll never completely understand until I get to heaven, I suppose. But once I got to that point I said ok, remember that song from a year ago, pull that thing back out cos now I'm ready. Man, I charged into it and I finished it really quickly but then I took the finished song and went back to my seminary professor and said, "Will you look at all this to make sure that it's right?" And that was a really neat thing to be able to do.

Tony: Looking through the album there are two songs which in years past Cross Rhythms gave a lot of radio play to. One was "This Fragile Breath", which is on there and the other, no sign of it, is called "Only One Thing". I don't know if you ever found out that there was a radio ministry in Europe who were heavily playing that song, but there you are, you know it now. I think that's a wonderful song.

Todd: Thank you. That's great. You know, the beginning of my career was so unexpected. I was playing youth camps and I was leading in church and I recorded 12 songs that we were doing in our young adult ministry in Memphis, Tennessee and I was going to sell it at camp and at church and Dana Key heard it and said, "Hey, more people need to hear this record than you're going to sell it to out of the back of your car." So that started my relationship with Ardent Records. It was really a surprise and the first song that they released was "This Fragile Breath". So all of a sudden this guy that nobody knew who he was, that had signed with a little management company with a little label with a little booking agency became a big song, and then we followed that with "Grace Like Rain". I came behind that and said, "Hey, guys, I think the third song should probably be 'Only One Thing'." And they said, "Well, we like it, but we don't know about the logistics of it because you put a Delirious? song in the middle of your song." I did. They're awesome. So it isn't released here in the States, not going to radio and I still pull it out every once in a while and play it. One of my best friends, Chris Collins, we wrote all of those songs together. So I've been pulling it back out because I've always loved that song. I didn't know that you guys used it, I'm very happy.