The Bristol-based trio known as TOMORROW'S GIRL are being tipped by many to break through. Tony Cummings asked them the questions. 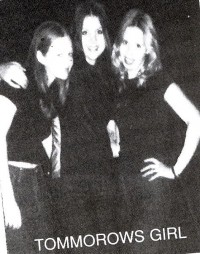 Those who know the UK scene are predicting big, big things for Tomorrow's Girl. On the verge of signing the big record deal, the talented trio of Tanya Farthing, Rachel and Carrie Coup have impacted schools all over the South West since their emergence under the NGM banner while their show-stopping appearances at events like Spring Harvest show that Christendom too is ready for their classy girl pop with an R&B edge. I began by asking Tanya for a potted history of Tomorrow's Girl.

"About two and a half years ago, NGM discussed the idea of setting up a new band to work primarily in schools, we wanted to engage young people with an experience of God. After a year of praying for the right people, we auditioned and came across Carrie Coup and Sue Facey, all of our hearts and visions matched up, we all wanted to get God across to unchurched young people in a relevant way and take Jesus to the furthest regions of our youth culture. We have now been going for almost two years and it is going really well. Rachel has just joined, taking the place of Sue, completing the T-Girl line-up."

It was in Germany that the group came up with their attention-grabbing name as Carrie Coup explained. "Whilst in Germany, the directors of NGM spotted a newspaper article with the headline Tomorrow's Girl' - a girl for the new millennium! She was described as being secure, confident and ready to face anything! At the time we were looking for a name for the band and we thought this name was great!"

I asked Tanya whether the group were tired yet of being described as a Christian version of the Spice Girls. "No as hardly anyone has ever said that to us! Our style js very different and there are three of us not five! If there have been any comparisons, it has been to Atomic Kitten, probably because there are three of them and we've all got the same colour hair!"

Unlike pop luminaries, Tomorrow's Girl are prepared to slog it out in the far from glamorous field of schools evangelism. Said Carrie, "A typical week, if we're not away doing gigs, would include rehearsals, vocal lessons, prayer meetings, administration work, fitness (six days a week!), working on new songs and dance routines and much more! We mainly work in schools doing lessons, assemblies and lunchtime concerts. We also perform at festivals like Cross Rhythms and Soul Survivor as well as doing many one off gigs, for example Alton Towers. We are extremely busy!"

Tanya emphasised the spiritual agenda for the group: "Our aim is to follow God's plan for us in letting young people know that God is exciting and relevant to them and hopefully we leave them thinking that it's not sad to be a Christian but actually it's cool! The best achievement we could have would be to see the young people we work with start an ongoing friendship with God."

Rachel gave the low-down on what Tomorrow's Girl's debut album might sound like. "For our new album, which we're just about to record, there will be a mixture of sounds influenced by Britney Spears and Christina Aguiler's style of music but still aim to keep our own sound original. I would say that our musical style is pure pop with a funky edge."

Though fans are still awaiting the Tomorrow's Girl debut album, one song, "We've Got What We've Got", has already been getting considerable airplay from their debut EP released last year by Engage. Rachel spoke about the track, "This song talks about the fact that we've all got different talents and gifts and that we shouldn't compare ourselves to others. We've all got something good to give and we are all valuable people. We believe that God accepts us for who we are no matter what and this song expresses this positive message."