Touched By A Song: "On The Fritz" by Steve Taylor

Ex Peace Convoy member Kevin Noone tells how he was touched by a rock gospel hit. 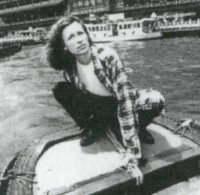 It was when I was living on the road. The newspapers called us the Peace Convoy and Maggie Thatcher called us hippy scum. We preferred the name Travellers. I'd come to the Lord in '82. I was being introduced into a coven of witches but I heard about Jesus from a brother who I used to take Magic Mushrooms with.

Somehow I just knew it was true. He got me to throw my silver pentagram away.

Four years on I was on the road...I'd got on the road to get away from the drug scene. I was dealing coke in Brighton - and I suppose you could say I was searching for truth. The part of the convoy I went with were trying to build a new order of Christianity. We'd gone off to Wales to start a Christian community there. In May '86 we moved down from the mountains for the annual travellers gathering at Stonehenge.

I'd always been into music - acid rock, club reggae, 60s psychedelia. I met a minister called Vic Jacopson who came to visit us at the Stoneycross site in the New Forest. He inspired me with his Christianity. We were all a bit out of our brains trying to build a new Christianity - dope, immortality - and here was this bloke who was really friendly who was accepting us for what we were but was showing us an example of what Jesus was like.

Vic inspired me and I decided to take a trip down to a Christian bookshop in Romsey. The lady there didn't charge me for a big pile of Christian magazines. Her generosity really impressed me. I bought a couple of music tapes - I didn't know what they were like. We'd just had our vehicles confiscated so I didn't have anyway of listening to them!
Some Christian friends of Vic Jacobson paid to put our vehicles back on the road. The first thing that I did was set up the sound system and I really loved "On The Fritz' by Steve Taylor. The whole album ripped me to shreds...particularly the song "On The Fritz." I didn't understand all the lyrics but somehow it came through to me that all the time I was doing all these hypocritical things, my whole lifestyle was a complete sham of what Jesus had given me back in '82.

Years later when I got to understand the song a bit better I saw that it was specifically about elitist church leaders building their own power structures. But back in '86 it was speaking personally to me, how I would tell everybody I was a Christian but really how my whole life was on the fritz. The song is just as relevant today - because it actually speaks out about the phoneys in the church be they American TV evangelists or Kingdom builders who are motivated more by the love of power than the power of Jesus.

But "On The Fritz" cuts like a two-edged sword. It's like prophecy in the Bible, one day it says one thing, another time it says something else.

He wished to right the wrongs he sang religious songs he kept the private he under a lock and key
Heat keeps rising in an age of passion shakes a conscience to the core
Stopgap, hand-slap, take a tongue-lashing
My poor soul can't take anymore.

Chorus
So the crowds grew,
and their praise did too
and a mailing list sent you money
so they love Jerry Lewis in France
does that make him funny?
It's too late for apologies when trust has been betrayed
now victims of your double life are naming names
He kept his ego there
it was a sad affair...on the fritz
the public s had enough
they've come to call your bluff..
on the fritz
Small talk breeds where kingdoms come crashing
rumour conquers where it wilts
no one hears you, go ahead and cash in
if you don't die to yourself
pride kills